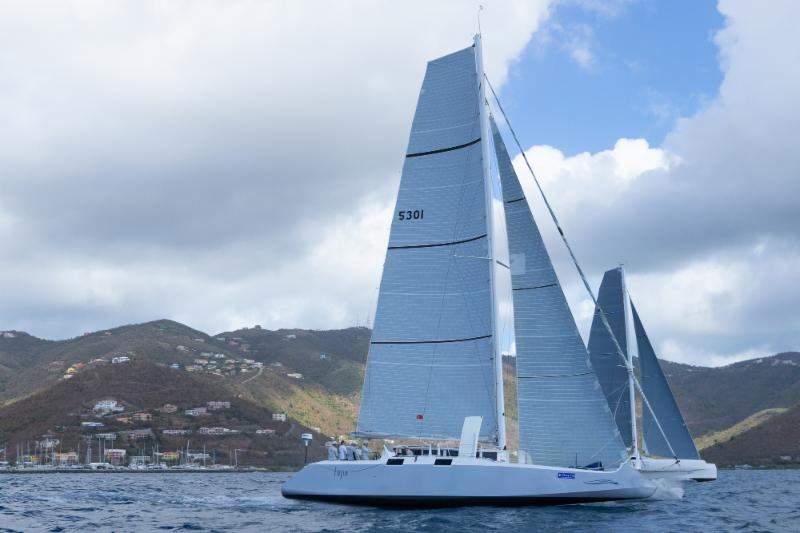 25 March, 2019 – Tortola, British Virgin Islands – A perfect day for record setting at the BVI Sailing Festival saw Fujin, the Bieker 53 catamaran owned and skippered by Greg Slyngstad, win the Nanny Cay Challenge with the fastest elapsed time of 1:57:16, breaking the standing record set in 2015 by the trimaran Triple Jack of 2:33:40.

Plenty of buzz added to the fun vibe around the docks in Nanny Cay as boats returned after close racing in all classes. Gunboat 62 Mach Schnell, owned and skippered by Kent Haeger also broke Triple Jack's 2015 record in 2:00:39, taking first in the multihull class on corrected time. The Rapido 60 trimaran owned and skippered by Steve Bourne also broke the 2015 record finishing in 2:19:54.

Sailing with the same crew of eight who recently won the Caribbean 600, Fujin owner/skipper Greg Slyngstad commented, “Today's race was one of the reasons we came out – the weather conditions looked good to try for the record. Mach Schnell was pushing us hard, it was a lot of fun, and we've raced against Triple Jack in the past and in lighter air they've beaten us. Conditions were really excellent, we saw over 25 knots but it was steady at 19-21 most of the race, with big puffs and lulls coming over the island on the north side – we're getting the boat figured out!”

For the Nanny Cay Challenge, both Fujin and E1 won a magnum of champagne sponsored by Tico, a BVI distributor, a crew dinner for 15 at Peg Legs Restaurant at Nanny Cay, and a donation in each team's name of $250 is given to a local charity.
The crew on E1 were thrilled to break the monohull record and wasted no time enjoying their champagne prize which they promptly popped on stage.

The group of Polish friends from the Yacht Club Sopot in northern Poland are in the BVI for the first time and regularly charter high performance Volvos. “The 70s are one of the fastest monohulls and we want to be first!” Rafal Sawicki said. “Today was a big pleasure to get line honors and be one of the first back to the dock. We had perfect conditions – no waves, fast and easy sailing.”

Pamala Baldwin, owner of the J/122 Liquid was one happy lady today after winning the Nanny Cay Cup which is awarded to the winner of the Racing Class in the Round Tortola Race. Baldwin was extremely proud of her young crew who hail from Aruba, England, France and the US. She said, “Jules White, my skipper and Sil Grijpma who trims main, did an outstanding job as did the rest of my crew who are mostly under 25. Today is the first time ever on this boat that we've sailed with the same crew as the last regatta. We've been placing second all season so winning feels really good!”

The Hanse 505 Avalon Sunset, owned by Joe Candido and his wife Claudia from Vermont, USA, raced their boat for the first time ever today and were thrilled to take first in the Cruising/Hanse Class. “What worked for us today was that as a team everyone had a specific role,” Claudia, who helmed, explained. “Once we started, we looked for clear air and just stayed on it. The Hanses' are very fast, we're really pleased with the way our boat sailed and today's wind really helped us. We caught up with the class in front of us and they couldn't shake us. I taught my husband to sail but he's done a great job of configuring the boat so it's fast – we're really happy!”

Willem Ellemeet, skipper of the bareboat Dauntless Five, a Moorings 45, wore a big smile as his team from the Netherlands were awarded first in the Bareboat class. He said winning on the start and making an easy tack up the south side of the island while keeping an eye on their competition Team Merlin put them in a good position. “We were always close but chose to stay closer to shore on the north side and weren't sure how that would pay off.”

Ellemeet, who sails regularly in Holland, is racing Spring Regatta for the second time with a group of friends from home. “I still need to explain to them how to work the lines and our fridge is full as is everything on the boat – it's a real bareboat!” Ellemeet laughed.

On Wednesday, the BVI Spring Regatta and Sailing Festival fleet looks forward to a fun race day to Scrub Island for the Scrub Island Invitational followed by a barbeque party on the island following racing.

Results for the Round Tortola Race here: https://yachtscoring.com/event_results_detail.cfm?Race_Number=1&eID=6074
– Michelle Slade