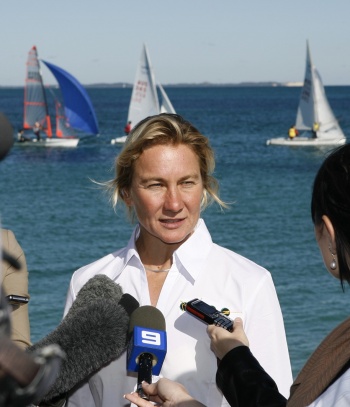 Belinda will be joined by members of the WAIS and WASS squads at the regatta which is being held at Hillarys Yacht Club between Friday, April 19 and Sunday, April 21.

Belinda said that every chance to race in a regatta with more boats fighting to win, congestion at starts and mark roundings and the like was a gain in their experience.

“As a coach it is a chance to test sailor’s training and provide analysis.”

Belinda says that she will be focusing this year racing tactics and strategies.

“In a coaching regatta we can sometimes give direct feedback on technical details, and it also gives us a chance to be closer to see and analyse more precisely.

“We are also expecting a strong WASS turn-out in the 29er and laser classes along with full rig sailors like Conor Nicholas, Caelin Winchcombe and Zac Littlewood.

“It was a great regatta last year, so to be able to build upon the numbers and fleet quality will be fantastic,” said Belinda

Classes invited to compete in this year’s regatta, which will be held on the west and north sides of Hillarys Marina, include Optimist, Laser, Bic, Minnow, National 125, Taser, 420 and 29ers.

The event also continues as an Optimist ranking regatta while the organising committee is discussing the addition of other classes with state associations.

The Notice of Race and registrations are available from the club’s website https://www.hillarysyachtclub.com.au/sections/dinghies/sail-easter-coaching-regatta.html