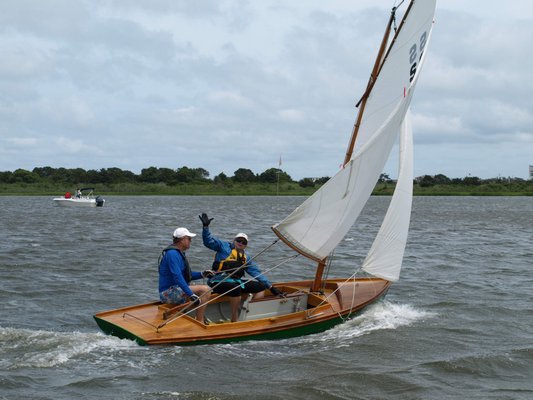 While many yacht clubs take themselves a bit seriously, it is good to see that there are still those for whom having fun is the main objective. This news report about a regatta in the USA certainly shows that Shinnecock Yacht Club has the right spirit.

Despite strong winds and stormy skies, the Shinnecock Yacht Club in Quogue hosted the SS Class Association Championship Regatta on Saturday afternoon in celebration of the 110th anniversary of the one-design, wooden sloop with a whole lot of history.

Only about 150 SS boats were made in 1908, by Benjamin Hallock. The boats that sailors use to compete in SS Class events must be restored to their original condition, with no added technology or frills. At Shinnecock Yacht Club, people were ready for the celebration with tables lined with longtime Westhampton resident and author Meredith Murray’s book, “The Magic Boat and the People Who Sailed It.” Some were even donning 20th-century period costumes.

“The SS Class is really unique because of the restoration process. Sometimes it can take years of work on the boats to get them to racing quality,” said James Schelter, a member of Shinnecock Yacht Club. The boats typically are sailed with two people, and are dinghy size, around 14 feet.

In a consistent 18 knots of breeze, with gusts up to 23 knots, two races were sailed, and the third and final race was called off due to safety concerns. After just two races, only four of the original 10 boats had not broken a mast or capsized in the gnarly conditions. But the spirit of SS racing is definitely alive and well here on Long Island, even on tough days like Saturday. The SS class is one of the more popular classes at Shinnecock Yacht Club, and as Schelter says, is going through “a rejuvenation” period.

“We only had four or five SS boats here in 2013, but now we have about eight within our membership, which is a large portion considering there are only 150 in the world.” Other sailors hailing from Westhampton Yacht Squadron, Sag Harbor, and Eastport came to celebrate the 110th anniversary regatta.”

After three broken masts, and various capsizes within the fleet, Rob Dudley and Jim Ewing took home first place with six points, followed closely by Bob Murray and Jock McLean in second place with seven points. In third place was John Sartorious III and John Sartorious Jr. with 12 points. The Atwater Trophy, which is given to the boat that wins the first races of the Championship Series, was awarded to the Sartorious family.

Even with repairs to be made and boats to be pumped out, smiles were still seen all around during the post-race awards barbecue, because, as Schelter noted, at this little but hearty yacht club, “at least if anything goes wrong, you can always just walk home.”