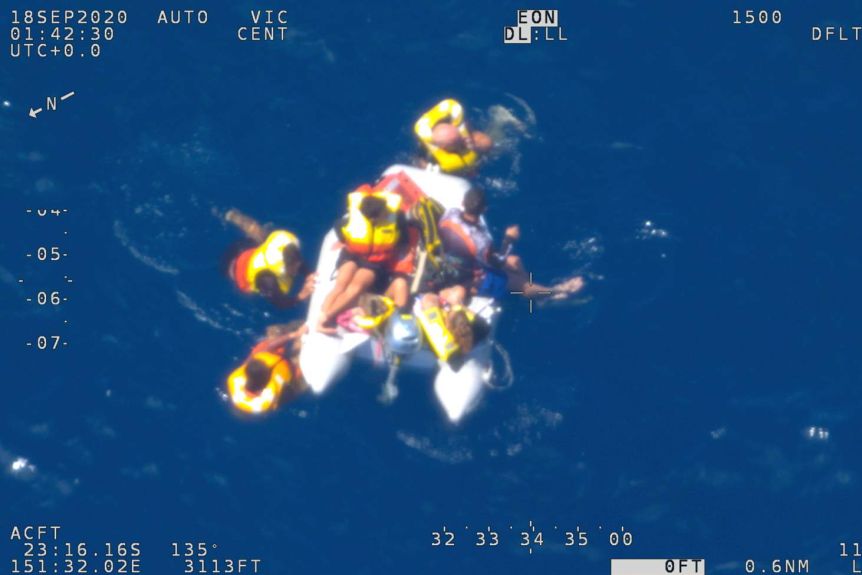 The catamaran survivors spotted from the air by AMSA's search jet.(Supplied: AMSA)

A Police spokesperson has praised the skipper of a catamaran that sank near North West Island off Gladstone, in central Queensland, saying it could have been a “completely different story” for the group of eight, including four children, had they not had life jackets and an activated EPIRB.

The photograph, taken by AMSA, shows the group huddling in an inflatable tender.

Authorities received reports the eight-metre vessel was taking on water and sinking off the Capricorn Coast .

“We're very grateful that for all the persons on board, they had a life jacket for each person and they had a current registered EPIRB,” Senior Constable James Purbrick said.

The search-and-rescue operation was coordinated by police from Rockhampton and by AMSA in Canberra.

“The Capricorn helicopter rescue chopper was dispatched, as well as water police from Gladstone,” Senior Constable Purbrick said. “Those survivors were rescued from the boat on to a local marine vessel where they were medically cleared by the rescue chopper and transported back to Yeppoon Rosslyn Bay.”

The aircraft were circling above the group as they were being rescued by sailors aboard the bulk carrier RTM Twarra, after the merchant vessel was diverted to the scene by AMSA.

It is not known how or why the boat started taking on water and it is now fully submerged.

“AMSA wishes to thank the crew of the RTM Twarra for their help in this successful rescue,” the organisation said in a statement.