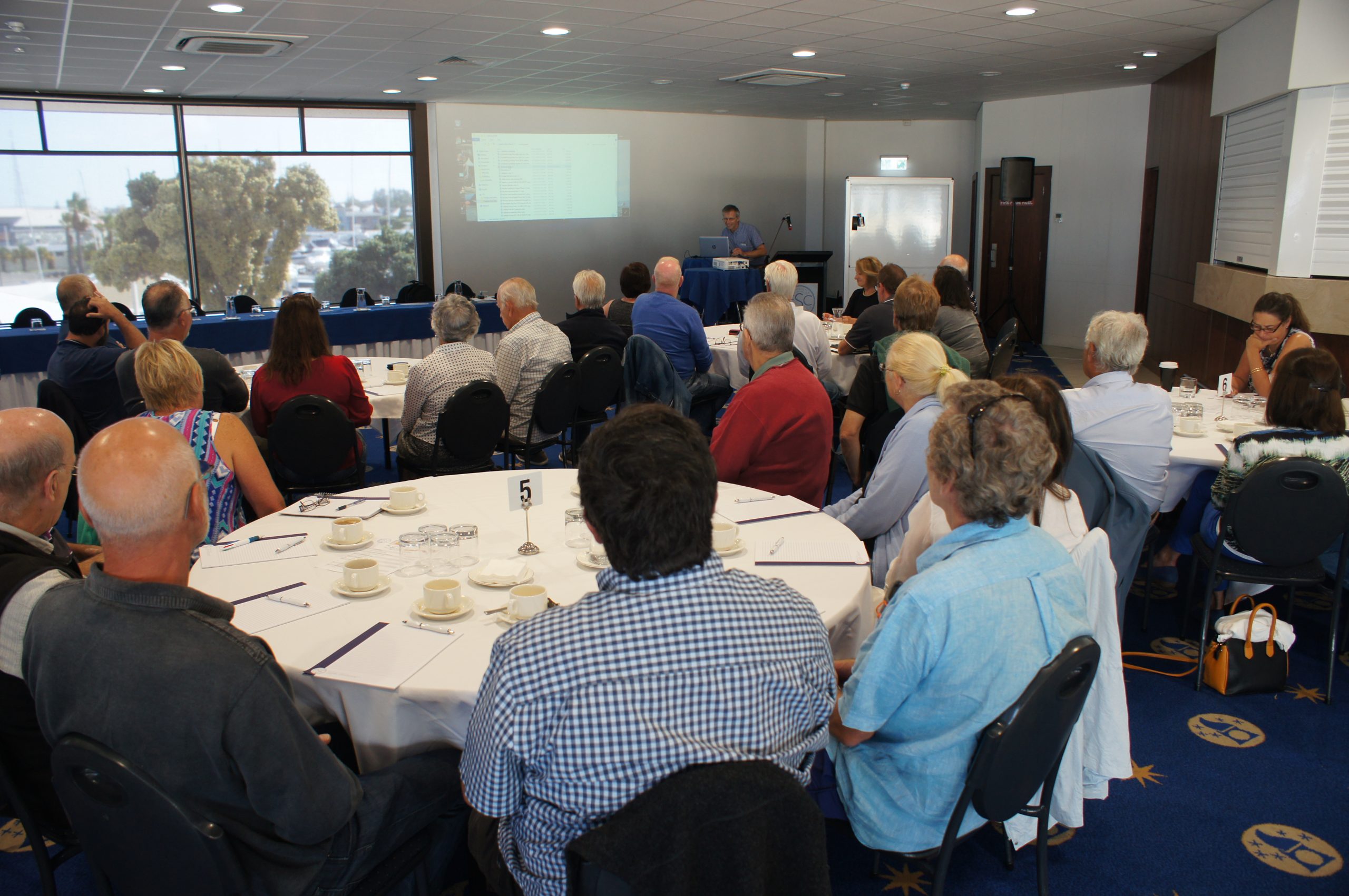 The Cruising Helmsman Yacht Club travelling seminar responded to an invitation from the Fremantle Sailing Club to host one of their day-long seminars last weekend.

With the Fremantle Doctor piping in early at over 30 knots, over 60 people attended the day to hear some great advice and information from some of WA's most experienced cruising sailors.

To kick it off the editor of the club's excellent book: The WA Cruising Guide, Kim Klaka spoke first about the guide and how it can assist anyone intending to cruise up and down the coast. Kim is a regular contributor to CH and, due to his naval architecture background, assists in our detailed boat tests in the magazine.

The guide provides detailed information on each available safe harbour along the coast and has been gathered over the decades as each cruiser visits and reports in with added advice.

For example in the simple open bay off Quindalup the guide can tell you about the slowly shoaling sand banks where the swell does not develop and where the seagrass banks are. Making it an excellent anchorage when it adversely looks like a bay wide open to the south west sea breeze.

Certainly the attending audience were already well-credentialled cruisers with the majority having already made it to the Houtmann Abrolhos and even the Kimberleys. As Klaka said in his presentation, one visitor from America told him that West Australian cruisers fill him with a mix of admiration and concern: “admiration for your seafaring skills and concern for your sanity!”

Next speaker was Andrew Maffett who took to sailing later in life but came with a long history of search and rescue activity. He also made the amazing circumnavigation of South Georgia Island by kayak.

Now an inspirational speaker on the circuit, he talked about taking the step from being a coastal cruiser to being an international one.

After morning tea a long-time contributor to CH, Cheryl Ainsworth spoke about the role of women in cruising. So many more yachts are heading off with just the partnerships as crew, even some with young families and Cheryl stressed the importance of the partnership working of each other's strengths and sharing the load to ensure proper safety.

“Think of your skills and preferences,” Ainsworth said, “not what traditionally men do and women do. There is no reason you can't learn what your husband knows.

“It takes time and attitude. Change your mindset and change your life.”

After lunch, CH gave their presentation to the audience on how to write stories fit for publication. This was followed by short presentations by three speakers on innovations happening in the cruising life: Rob Hills on electric propulsion; Geoff Bishop on furling sails and sailmaking technology and Kim Klaka on antiroll gyros.

Following afternoon tea Manfred Speicher finished the formal proceedings off with a spirited presentation on safety on board, taking a humourous look at the subject via an airline's safety demonstration before take-off.

The day ended as the Captain's Deck always does with all speakers up at the front table and open to a Q&A session from the audience.

Thanks to the Fremantle Sailing Club for the use of their facilities and members should stay tuned for any more seminars that club presents.