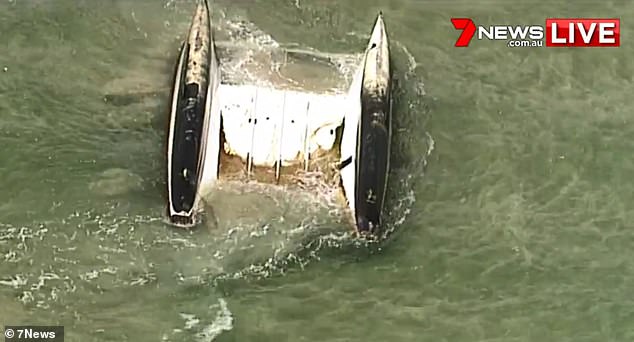 The overturned catamaran after five months in the water. Photo Channel 7 helicopter.

A cruising catamaran which capsized off the New South Wales coast in July, killing three people, has been found 600 kilometres north off North Stradbroke Island.

Sydney grandparents Helen and Rod Cooper, both aged 78, drowned along with a family friend when their boat capsized in rough seas 25 kilometres off Stockton Beach near Newcastle. Their son Jeremy Cooper, 50, and his daughter Emma, 16, were found clinging to the capsized boat and were winched to safety by the helicopter rescue service.

On Friday, the Channel 7 news helicopter filmed what they believed to be the boat, floating off the island. Subsequently, police confirmed that the wreck is the Cooper's catamaran. Owing to strong winds and tide, the boat has not yet been recovered but police sources said that they would attempt to do so when conditions moderate.

To read the original story filed at the time of the incident, go to http://www.mysailing.com.au/latest/three-dead-two-rescued-after-catamaran-capsized-off-newcastle.

To check the effects of five months in the water, click on the dots above to see the original photograph.