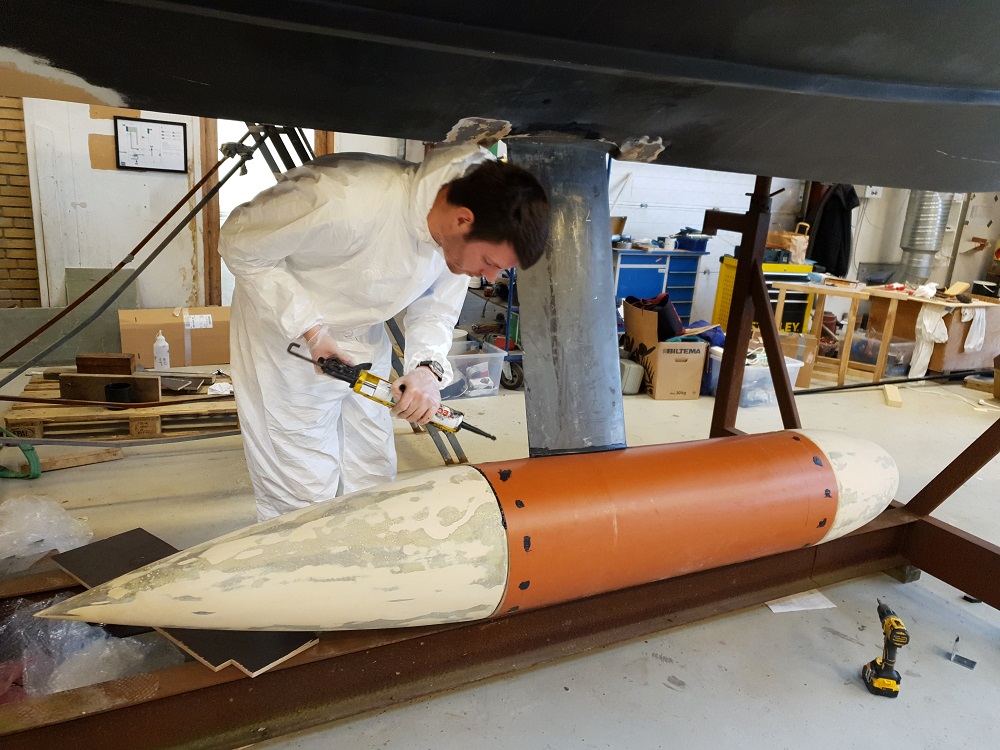 Danish startup Dacoma is turning canting keel technology upside down by fitting an air tank – rather than a lead weight – inside of the keel bulb.

The canting keel is a device found in offshore racing, particularly in the largest vessel classes. It minimizes a monohull sailing yacht's angle of heel and keeps down keel mass at the same time. The canting keel features a long strut connecting a bulb keel to the bottom of the hull, along with an actuating mechanism to swing the assembly to windward at the required angle.

Dacoma's version is air-filled and computer-controlled, and it swings in a manner tuned to wave action. Known as the Airkeel, it adds about 1.5 meters in draft below the boat, and its lower part is a hollow, oblong compartment filled with air. Its primary target application is for wind farm crew transfer vessels, which need smooth handling for crew comfort.

Recently, the first vessel ever fitted with an automated air filled swing keel got under way for a brief sea trial on a seven-meter workboat. The keel automatically swings from side to side with movements controlled by a computer and by software developed by Dacoma.

After a year of patenting, funding, development and lab testing, Dacoma took its keel design out to sea for the first time at Faaborg Harbor, on the island of Funen. Dacoma and Tuco Marine Group joined forces to test the Airkeel on Tuco's fast ProZero-type workboats.

In the shipyard, Tuco cut a hole in the bottom of the boat and worked with Dacoma to mount the Airkeel. Inventor and Dacoma founder Arnd Baurichter climbed on board and started the outboard engine.”It was a big moment, when I sailed away from the slings, but immediately I felt safe at the boat’s movements. It sailed just as expected. The only unusual thing was that the boat didn’t heel over, when I turned and swung around – but that’s exactly what the software adjusts in order to make things as stable and comfortable as possible,” says Baurichter.

Hundreds of data points were recorded by the system's computer during the 30-minute harbor trip, and after weeks of analysis, Dacoma determined that the swing keel operated as designed. ”When I did a 360 degree turn, the keel swung by only 5 degrees to prevent heeling, but that was at quite a slow speed,” says Baurichter.

The analysis also shows that more testing of the system’s power consumption and course stability is needed in order to fine-tune it. “From the beginning, the system batteries have been overdimensioned, but we need to optimize that. Power usage and weight are important parameters when it comes to commercializing the system,” says Baurichter.

At the next launch, the keel will demonstrate its function in waves outside the harbor. The project takes place within the Maritime Cluster of South Funen, with support from the Danish Maritime Fund and the Innovation Fund.