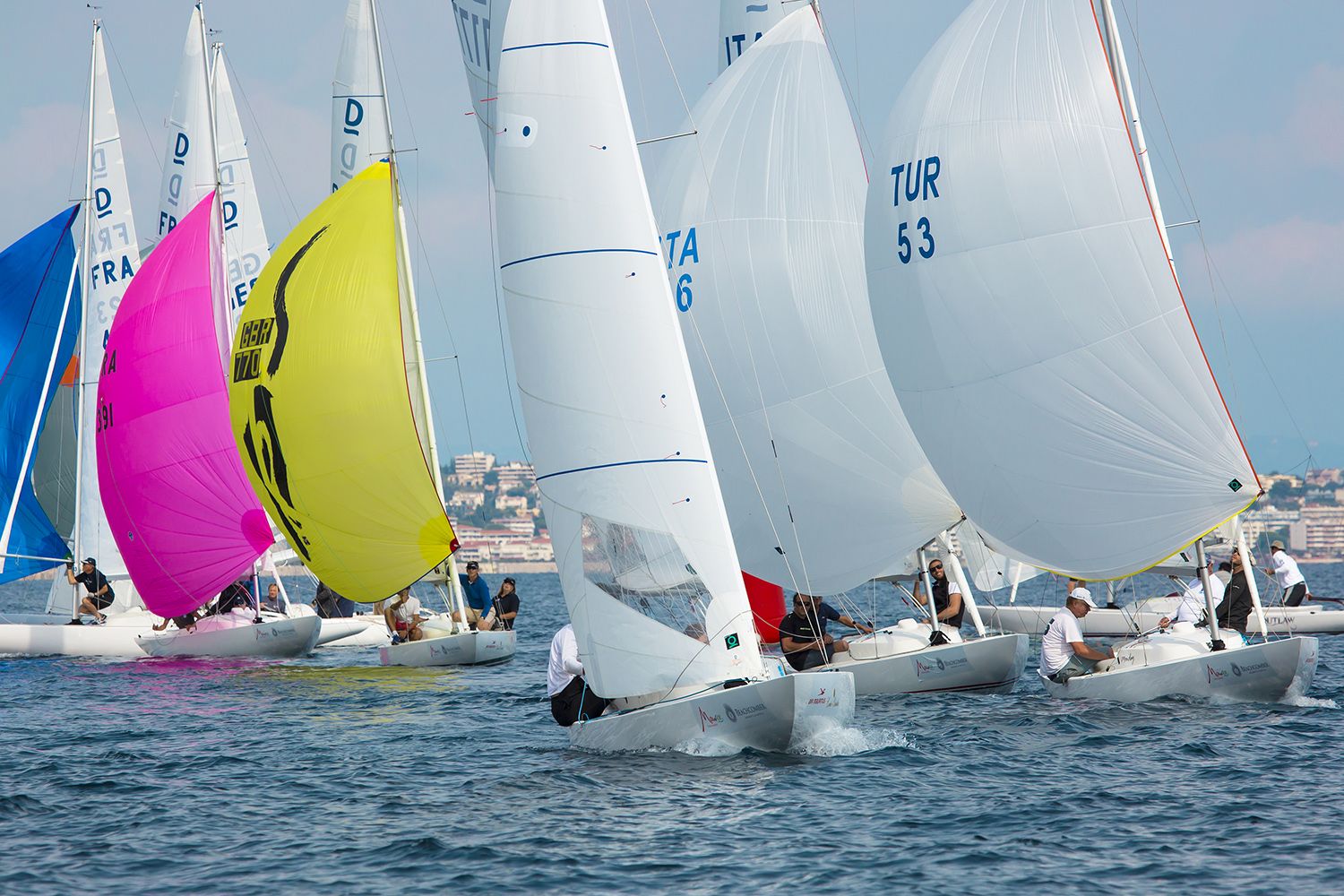 Grey skies and light airs were on the menu today for the opening day of the 39th Régates Royales de Cannes – Trophée Panerai. Two races were launched for the Dragons while the classics had some serious training before racing starts tomorrow for them too.

The palms on the world-famous Croisette were not moving much today. The wind was light and shifty as the sun rays were almost totally hidden by the thin clouds.   As the sea breeze was late in showing up and it was patchy on the race area, the Race committee had to make several attempts before being able to launch the first race for the 44-boats strong Dragon fleet.

Actually the easterly wind was never stronger than five or seven knots, barely enough to ripple the water. And, after some trying the fleet started the day’s first race with a black flag (meaning that all the boats over the line are automatically disqualified) on a windward/leeward course. The strong Russian crew skippered by Anatoly Loginov on Annapurna prevailed on fellow countryman Igor Goikmberg on Zenith and Germany’s Michaël Schettun on Chi, in third place.

Yet, race 1 was just an appetizer, because the flimsy and shifty wind forced the RC to set a new course to launch race 2. The day’s second round reshuffled the cards on the table: the Russians were not at their best and finished mid-pack, whilst the British and the Germans sailed on a high.

UK’s Yvan Bradbury on Blue Hazewon the race,ahead of  Germany’s Michaël Schettun on Chiand Briton Jonathan Brown on Storm finished in third, with Annapurna and Zenith in fifth and eight place respectively.  The first French crew across the line was Jean Bragger’s Ulysse, while Turkish teamMonday, skippered by Arkun Demircan, debuted in grand style finishing in the top ten on this first appearance in Cannes.

Classic training
The light air did not discourage the classics’ crews, who took advantage of it to do some training and to fine-tune their setups and improve their manoeuvres before racing starts on Tuesday. 12 Metres or ketches, centenary yawls or gaff cutters, dozens of yachts went out on the bay. There will be many more tomorrow, when racing kicks off officially and just under a hundred boats will wrestle for victory, in different divisions and classes. The wind should still be a light easterly, increasing a notch in the afternoon thanks to a warmer sun on the Bay of  La Napoule. The air temperature should also be very pleasant and typical of the early autumn on the Cote d’Azur, with some 20-23° C.

The outlook for the rest of the week is even more positive: the wind should steadily increase making the Régates royal once more.