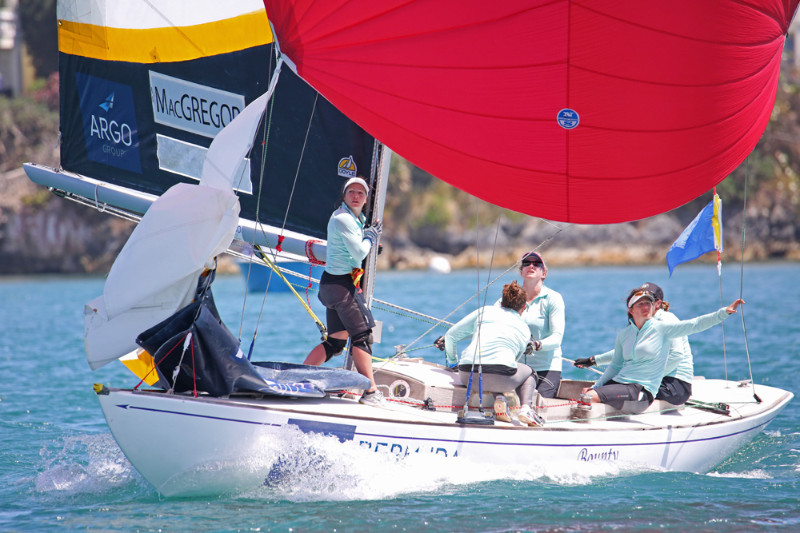 Canfield and crew Mike Buckley, Victor Diaz de Leon, Erik Shampain and George Peet won all six of their matches and are the only undefeated team remaining at the $100,000 match racing regatta. Close behind are Joachim Aschenbrenner’s Team TriFork from Denmark with a 6-2 record. Johnie Berntsson’s crew stands third at 5-1 and Lucy MacGregor’s crew from the U.K. is fourth with a 5-3 record.

A total of 35 races were completed today as principal race officer David Campbell-James took advantage of the southerly wind blowing between 10 and 15 knots. With the wind blowing across Hamilton Harbour there were shifts of 20 to 30 degrees at times with many puffs. The steady pace of action left many struggling to recall what had transpired during the day.

“It was a long day. It all sort of blurs into one race,” said MacGregor, the two-time Women’s Match Racing World Champion. “It was so shifty and puffy, but we felt really good. All things considered, we’re happy to be 5-3.”

MacGregor’s crew includes Bethan Cardin, Annie Lush, Hannah Diamond and her sister Kate. Cardin, Lush and her sister were all aboard last year when they won the worlds. Diamond is new to the crew but is a familiar foe from many years of racing.

“My sister Kate is good at the shifty, gusty sailing. It’s useful to have her onboard with her head out of the boat,” said Lucy MacGregor. “With five crew we have a lot of options for boathandling. Sometimes it’s hard to know if we’re going in the right direction with it all because we haven’t sailed monohulls in a while, but we got around the course cleanly and are sailing fast. That’s the main thing.”

When it comes to sailing fast, no one could match USone today. Canfield is competing in his sixth consecutive Argo Group Gold Cup and is the only skipper in the field with a string of consecutive top-four finishes. He won in 2012, finished third in ’13 and ’14, and placed fourth in ’15.

All sailors speak of the trickiness of the International One-Design sloop, but it’s a boat that Canfield clearly feels comfortable in.

“My crew were all-stars today,” said Canfield. “They did a great job boathandling and staying in phase. They also gave me a lot of help getting off start line. Racing in the harbor is a game of patience. You have to be ready to react but also patient to see if the shift is coming true. We had a lot of good communication onboard today and can only get better from here.”

Aschenbrenner’s crew could be considered a surprise in second place. Aschenbrenner competed in the Gold Cup for the first time in 2015 but was eliminated so quickly that he forgot about the experience. Yesterday, their practice was hampered because their bowman, Ian Coleman, missed a plane connection, so the crew work wasn’t fully tuned in when racing began. But the young Dane was hardly flustered.

“We struggled a bit in the first few races because we had a tough day training, but as we went on we felt more confident,” said the 24-year-old skipper. “Part of our struggles were also because we couldn’t figure out the timing of the shifts. But we managed to get on more and more shifts as the day went on. We’re feeling great.”

Still, there were many more left shaking their heads. “We learned how to shoot ourselves in the foot,” said 25-year-old Chris Poole of the U.S.

“We learned that we need to practice the pre-start more,” said Italy’s Ettore Botticini, the youngest skipper in the fleet at 22 years old.

“It was a tough day. It’s our first time in Bermuda and we have a steep learning curve,” said 24-year-old Sam Gilmour of Australia.