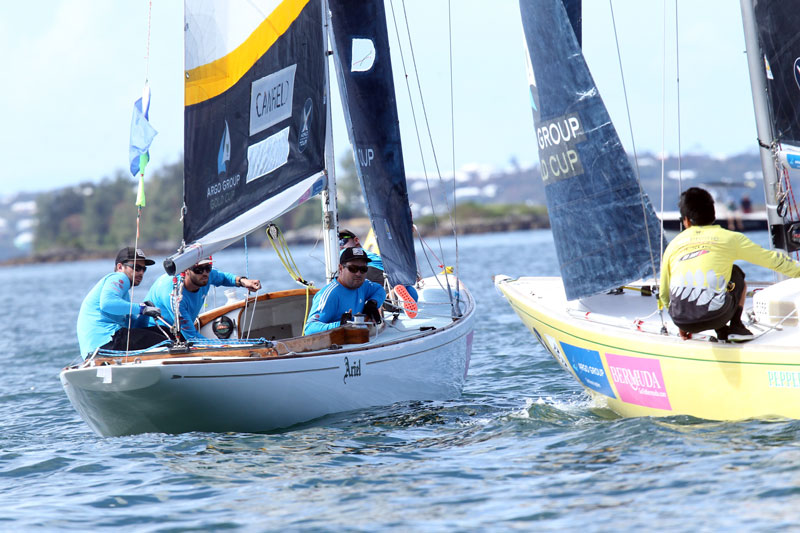 The Semi Finals of the $100,000 Argo Group Gold Cup features a past World Match Racing Tour champion, a two-time runner-up, a 12-time entrant and a young gun aiming to upset the balance.

Crews led by skippers Taylor Canfield, Adam Minoprio, Björn Hansen and Keith Swinton advanced to the next stage of the regatta after surviving a light and patchy day on Hamilton Harbour.

Tomorrow morning’s Semi Final will pit Canfield’s US One against Minoprio’s BlackMatch team and Hansen’s Nautiska Racing versus Swinton’s Black Swan Racing. The winners move on to the Final tomorrow afternoon.

As the No. 1 seed in the regatta Canfield chose to race Minoprio, which forced the other match up.

“We chose Adam because we think he’s a little rustier than the other two,” said Canfield. “Adam hasn’t done a lot of match racing this year. Björn looks like he’s on point and Keith has been sailing very well. So we’ll take our chance with my good friend Adam.”

Canfield, the 2013 World Match Racing Tour champion, and his US One crew defeated Chris Steele’s 36 Below Racing, 3-0, to remain undefeated in the regatta. The crew has won all 10 races they’ve sailed.

“Even when they’re on the wrong side of things they minimize the damage and come out of it in good shape,” said Steele of Canfield and his crew. “They’re always fast. We led two of those three races and should’ve been able to put them away. We did plenty right, just a few things wrong, and they always carry enough momentum to make you pay for your mistakes.”

Swinton’s Black Swan Racing from Australia took down Ian Williams’ GAC Pindar, 3-2. Williams’ crew leads the 2015 World Match Racing Tour overall standings. But when the match was on the line in a winner-take-all fifth race, it was the younger Swinton, aged 29, who came out on top. Swinton credited his crew’s run through the Repechage Round as preparing them for the challenge.

“Full credit to Keith and his crew,” said Williams, the five-time match racing world champion. “It was hard to know today whether (it was best) to be ahead or behind at the windward mark. All the situations that were 50-50 went Keith’s way. They had better execution and deserved to win.”

Minoprio, runner-up in 2008 and ’09, and his BlackMatch crew took down fellow New Zealander Phil Robertson and his WAKA Racing team by a score of 3-2. A close match through the first four races, the decider was lopsided in Minoprio’s favor when he got a penalty on Robertson in the pre-start and then Robertson started too early.

Hansen is making his 12th appearance at the Argo Group Gold Cup and ninth consecutive with his Nautiska Racing Team. His previous best finish was 2nd in 2007. In today’s light winds he defeated Eric Monnin’s Swiss Match Race Team, 3-1. Monnin’s crew are considered light-air specialists, but they were no match for Hansen.

“We were happy with our boatspeed but Björn sailed very well,” said Monnin. “He gave us no chance to pass when we were behind. I made a couple of errors in the starts and we had no chance to get back at him.”

“Eric’s team is extremely good in these boats and light winds,” said Hansen. “We managed four good starts and had good tactical calls from Massimo (Bortoletto).”

Semi Finals start tomorrow morning at 0900hrs (ADT). Stay up to date with the event as we bring live race action via Twitter on @wmrt_liverace and regular updates on @worldmrt from Bermuda. Follow us on facebook.com/worldmatchracingtour to get the latest news, event updates, behind the scenes and information of the Argo Group Gold Cup.