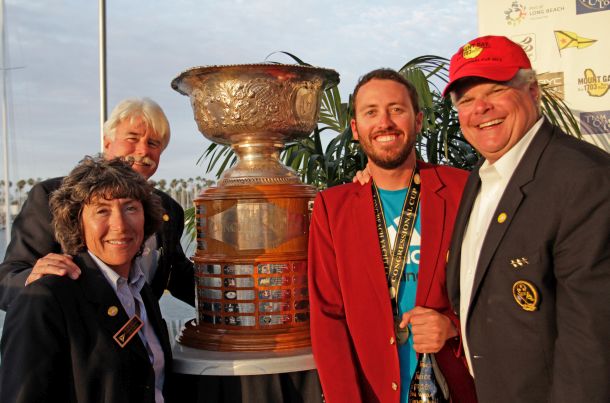 Long Beach, California, USA (17th May): Taylor Canfield successfully defended his Congressional Cup title in a thrilling five-day series off the California coastline, completing the opening stage of the 2015/16 World Match Racing Tour (WMRT) season. Twelve skippers from nine nations competed in the 51st edition of the prestigious Congressional Cup regatta, hosted by the Long Beach Yacht Club May 13 to 17.

Canfield had moved his way up through the round robins with a solid – but not undefeated – record; and into the quarterfinals and semifinals, to race against Sweden's Bjorn Hansen. Ian Williams and Phil Robertson made up the second pairing.

The term 'underdog' is relative: and it might be hard to call Hansen, ranked no. five in the world, and Robertson, ranked 13, underdogs – but when racing against number one and two in the world – Williams and Canfield – it's justified. Particularly with Hansen a newcomer to the Congressional Cup boats and venue; and Robertson admitting his prior performance in Congressional Cup as “terrible!” So when Hansen defeated Canfield in the first match of the semis this morning, and Robertson beat Williams, spectators and competitors alike knew it would an exciting day.

Canfield would go on to defeat Hansen in the next two races and advance to the finals, despite sterling opposition. To Hansen's credit, his team had advanced swiftly and confidently, with incredible boat handling and speed, for Congressional Cup newcomers.

In the Williams/Robertson pair up, it was equally tight. Robertson took two wins, before Williams rebounded with two of his own. It came down to a final match; a thrilling tryst that went to Robertson in the end.

The racing had been close, and aggressive, with fierce pre-start action: the boats spinning and tacking in their menacing dance just inches from the pier. During their pre-start dial up the boats grazed the Belmont Veterans Memorial Pier, where hundreds of spectators pressed against the rail for a closer look: coming so close, Robertson at one point got hung up on a buttress – his backstay snagged against the pier structure.

During the boat swap, LBYC held a fleet race for the remainder of the racers: Keith Swinton's Black Swan Racing Team won, trailed closely by Chris Steele, who's crew hiked and sailed as if their Catalina was a 37-foot dinghy. Then it was 'on' for the first-to-two finals.

Canfield triumphed in the first race, Robertson the second, and it came down to a winner take all match.

The wind had increased to 12 knots, from 220 degrees. Both boats were OCS in the aggressive start; Canfield ducked to clear his bow but Robertson had to circle round the committee boat, putting him at a disadvantage he would never completely recover from. But not without trying. Canfield led by less than a boat length at the crossings; by the second top mark it was mere meters: so tight, the jibes were perfectly synchronized.

“The last match was intense” Canfield admitted. “I was a little nervous coming into the event: I haven't match raced since February, and probably sailed the worst I've sailed in a while. The team really pushed hard through the whole event.”

In the final downwind leg, “It came down to that last luff, and my guys were ready for it,” Canfield said. “We went right through the lee of Phil [Robertson]; and kept working every moment.” Canfield crossed the finish line less than two seconds ahead of Robertson, to win the final match and the Congressional Cup title.

Coming in second, said Robertson, “blew out all expectations I laid out. I put together a group of guys that are really good friends, at one of the best events in the world. So we are really, really happy. We did a fantastic job, and had a great time. The boys said we probably did everything 100 percent, both on the water and off. You couldn't ask for more that that.” For all his zany antics, Robertson proved himself a sharp competitor, and a favorite of his fans at LBYC.

Ian Williams from GBR finished a respectable third place – an impressive comeback for the five-time World Champion after falling behind in the round robins; he and his Team GAC Pindar fought to survive, and dashed Hansen 2-1. Hansen, in his inaugural Congressional Cup regatta, finished an impressive fourth.

As the winning skipper, Canfield was awarded the coveted Crimson Blazer – an honor bestowed to the top names in sailing over the years, including Dennis Conner, Ted Turner, Dean Barker, Ken Read, Gavin Brady, and more. The event also disbursed a prize purse of USD$75,000.

And the loser receives an award stingingly referred to as 'The Book.' “Race Your Boat Right” was written by world champion yachtsman Arthur Knapp Jr. in 1960. It has been, for decades, the Congressional Cup 'consolation prize' – presented with all decorum, on a pedestal, encased in glass. This year it went to Event Chairman Bill Durant's own son, 12th-place competitor Dustin Durant.

Trash Map: A way to clean our oceans together