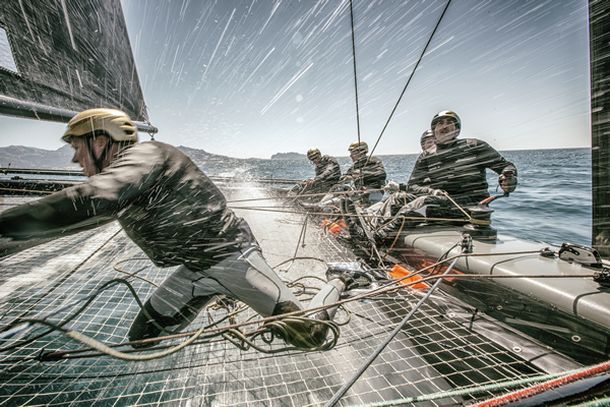 With winds forecast as gusting well into the 20s mid-week and over the weekend, Marseille One Design looks set to provide a drama-laden conclusion to the 2015 Bullitt GC32 Racing Tour.

Racing for the five teams starts at 1200 on Wednesday (30th September) when the wind is predicted to be blowing a solid 20 and gusting to 25 knots, right at the limit of what the nimble GC32s will compete in.

While there is some trepidation about the wind strength, whether the crews get to experience their foiling cats ‘at the max’, depends more upon the sea state and the wind direction. Mid-week the forecast shows easterlies and southeasterlies over the weekend. While the latter may kick up some waves, the former is an offshore breeze and therefore good, believes Nils Frei, trimmer on Ernesto Bertarelli’s Alinghi. “I think we can sail, but it may be marginal. It is good for the waves, because the easterly in the bay is from behind the mountains. That means it will be flat water, but quite gusty. But we had that here in the spring and it was really good racing.”

Alinghi is the current GC32 speed record holder, having recorded 39.21 knots on Lake Geneva in May. The conditions forecast this week could just prove ideal to take the GC32s above 40 knots, Frei agrees. “All the crews are getting better and better, but that is quite a speed on a boat this size.”

In line with this, Principal Race Officer Anne Malledant is considering putting on some speed runs for the GC32s, to be rewarded with a special prize presented by by circuit sponsor Bullitt. This will allow crews to experience their flying boats turn supersonic.
Otherwise this week Alinghi is out to beat Sultanate of Oman, particularly as the Bullitt GC32 Racing Tour leader will be sailing with a stand-in crew, albeit an all-star one, including London 2012 49er gold medallist Nathan Outteridge and British two time Olympic gold medallist Iain Percy. “They have a very good crew, are used to foiling and are very fit,” observes Frei. “It is a new boat for them, but I’m sure in one day they will acclimatise to the boat.”

This season Alinghi has shown periods of great promise, winning at Sailing Cup Kiel in July. Frei summarises their form: “We definitely have the potential to do well. We’ve had a lot of race wins, but somehow we also made some unforced errors. We didn’t have one event where we have been consistent all the way through, except maybe Kiel. This year we have been in second place a lot, which is something Alinghi doesn’t like much!”

Alinghi will certainly be challenged by Spindrift racing, the team of Ernesto Bertarelli’s sister Dona and French multihull veteran Yann Guichard. “At the moment it looks really windy, but it is so nice to sail in Marseille – I love sailing there,” says Guichard, But he admits that, in missing the Cowes Cup, this will be the first time they have sailed their GC32 in big conditions. “It will be new for me, but for other teams as well, because none of us have spent much time sailing in these conditions. It will be exciting!”

As to how he anticipates they will perform this week, Guichard says this will depend on the wind. “If it is a sea breeze, 10-12 knots, it will be easier to be comfortable with the boat. But if it is windy, that changes the game completely. Our goal is to sail well and to learn about sailing in these conditions.”

If there is a ‘big wind GC32 specialist’, then it is ARMIN STROM Sailing Team, which is the defending Marseille One Design champion and won the Cowes Cup in such conditions.

However skipper Flavio Marazzi points out that with crew changes on board recently, his team’s reputation may no longer hold true. “It is hard to say where we stand. We sailed better every day during Rome, but then it was never more than 10 knots. In 25 knots it is another game. It is more important to enjoy the last event and get some good conditions.”

Wearing his GC32 Class President hat, Marazzi says he is looking forward to seeing some new prospective teams in Marseille and a thrilling conclusion to the 2015 Bullitt GC32 Racing Tour, providing the ideal launch pad for the circuit going into 2016.

Marseille One Design is organised by Sirius Events, whose CEO Manfred Ramspacher is looking forward to the event. This is the third time Marseille has hosted the GC32s – part of its build-up to being European Capital of Sport in 2017: “Marseille was just chosen to host the sailing as part of Paris’s bid for the 2024 Olympics Games. It is a fabulous place for that. Didier Réault, Deputy Mayor for Maritime Affairs, is keen for Marseille to become the no1 place for sailing in Europe.”