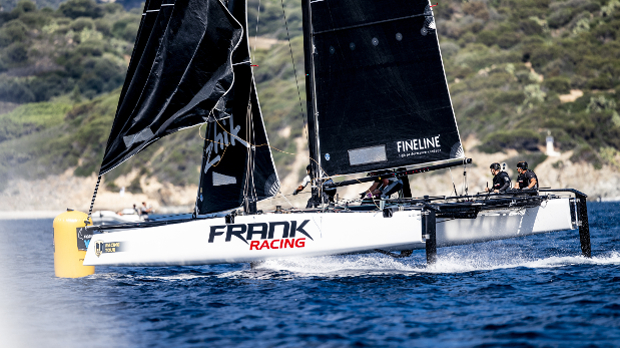 Tough conditions for day two of the GC32 Villasimius Cup resulted in a long wait before the wind filled in and built to 10 plus knots albeit from an easterly/south-easterly direction that was not forecast.

Against expectations, this breeze held, enabling four races to be sailed laterally across the Bay immediately off Marina di Villasimius, here in Sardinia’s south-easternmost tip

While the two America’s Cup teams have been touted as favourites for this penultimate event of the 2018 GC32 Racing Tour – and indeed they share equal points in the top spots at the end of today – they have by no means had it all their own way.

“We were to leeward and pushed them. He didn’t answer enough so he was in a tricky position,” recounted Cammas. The British team picked up a penalty, but was still able to finish second. This followed their win in today’s first race.

Norauto’s second victory was in the final race, as the wind dipped below 10 knots and became patchy across the race course. Cammas said their pre-race strategy had paid off… to start with at least.

“We wanted to start on port and sail one quarter on port and then do the rest on starboard because there had been a light spot on the left in the previous race. It worked well the first time but not on the second upwind leg…”

However, the French team had already pulled out a sufficiently big lead for this not to matter.

After day two the French team leads overall, only on count-back from INEOS Team UK.

Of his day, Ben Ainslie said: “We had a good first race. The second was good, but we got wrapped up with Franck – they luffed us, because they were trying to break the overlap, but we got a penalty…

“The last two we just lost a couple of places not finding the breeze – it was a bit frustrating in the end. I’m still learning to sail with this new group and getting the communication going.”

This is only Ainslie’s second ever event on the GC32 Racing Tour.

The owners of INEOS, the company backing the British America's Cup campaign, are in Villasimius this week, enjoying the GC32 Racing Tour's guest program and offering their support to the British team. “They are enjoying the event and the boats. Let’s hope we get a couple of good days of foiling with some more breeze,” Ainslie concluded.

As if to stand up for their own nation’s America’s Cup effort, today’s third race went to Simon Hull and his crew of young New Zealanders on board Frank Racing. Hull was delighted but slightly mystified by the result.

“I don’t get to look around much – I have to keep my head down!” he said of his win. “We had one good one today and a couple of okays. It was very variable. The right way paid – but which was the right way?”

The race the Kiwis won was also the most difficult of the day, compounded by the fleet all being some 30 seconds early for the start line, which resulted in two OCS's and two penalties.

Then at the finish, as Frank Racing crossed the line, almost simultaneously Erik Maris’ Zoulou came screaming across the opposite end of the line. “They were honking and we were struggling, but it was nice to get a gun,” Hull said.

While Norauto won the final race, also delighted by their result in this was Federico Ferioli’s Codigo Rojo Racing from Argentina, having finished third with all their crew to leeward, after overtaking Ineos Team UK just metres from the line.

Today’s round of the Anonimo Speed Challenge was claimed by the Swiss crew on Realteam.

All information on the GC32 Racing Tour: www.gc32racingtour.com