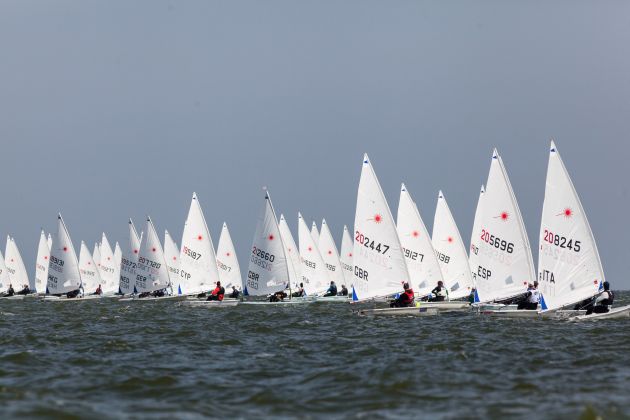 (Medemblik, Netherlands) – With sunny skies and a consistent 10 knot breeze, all 6 fleets completed two races for the second day of the Laser Radial Youth Worlds. A persistent left shift moved across the IJsselmeer throughout the day, causing multiple general recalls and postponements for course and starting line adjustments in every fleet.

On Alpha Course, the yellow fleet got off their start under a U Flag and Ireland’s Ewan Mcmahon led the way around the course with Josh Armit of New Zealand and Australian Caelin Winchcombe close on his tail.

The following blue and red fleets had multiple general recalls before finally starting Race 1. Japan’s Yoshihiro Suzuki sailed to an easy win in the blue fleet while Norway’s Uffe Tomasgaard found his form to take a bullet in the boy’s red fleet.

Slightly lighter winds caused the fleets to spread out in Race 2. Gregoire Peverelli of Switzerland managed a win in the blue fleet, which paired nicely with his second place from Race 1 today. Local Dutch sailor, Juan Camacho Soares, rounded out the day with his best race of the series; winning the final race on Alpha Course in the red fleet.

Clean starts were equally tricky on Bravo Course as sailors pushed the pin end looking to take advantage of the day’s left shift. Italian Guido Gallinaro dominated the boys’ green fleet with a pair of bullets and, after discarding his fourteenth place from yesterday, now leads the 273-boat boys’ division with a perfect 3-point score line followed by a tie between Argentina’s Matias Dietrich and Winchcombe each with 7 points.

In the girls’ division, first place is tied between German Julia Buesselberg and Lin Pletikos of Slovenia with 4 points apiece. Buesselberg found her place at the top of the white fleet today, claiming a first and second for the day. Pletikos won her first race in the purple fleet and followed by sailing her discard 6th place in Race 2 to claim second place overall on a tiebreaker with Buesselberg. Great Britain’s Matilda Nicholls had a consistent day with a 2 and a 4 to remain in third place overall in the 106-boat girls’ division.