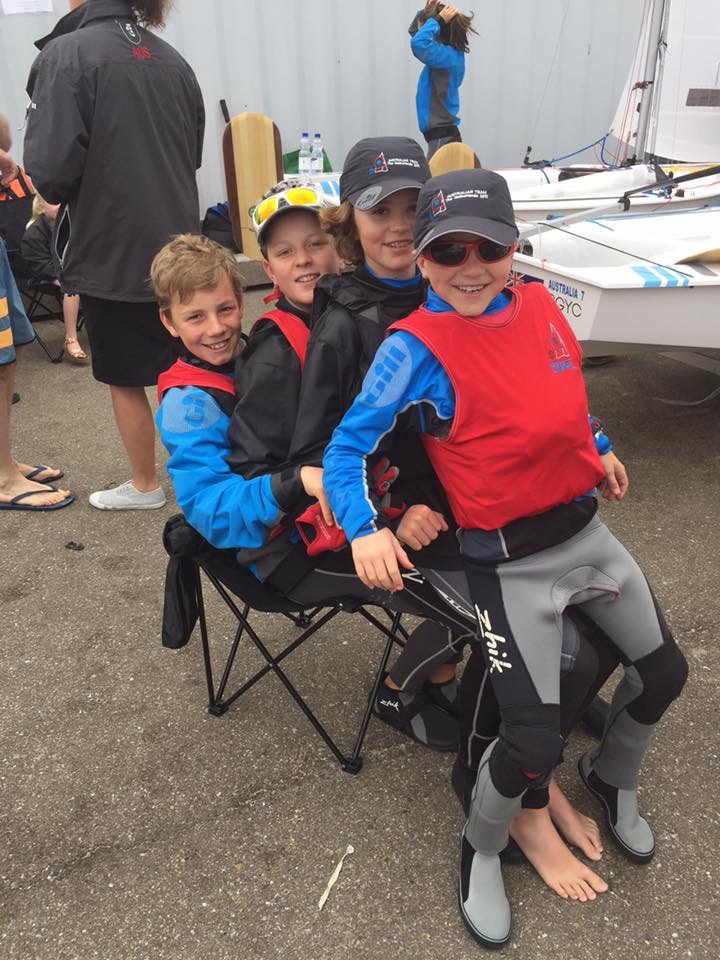 Three races were sailed in a light nor’easter of 3-5 knots – this was a new direction we hadn't done much sailing in – and in contrast, this breeze had a one way tendency with the left hand side of the course generally favoured. It tended to be a ‘bang the corner’ type race track and it took a while for a few of our sailors to pick this up.

With breezes swinging so much on other days it was hard to gauge whether it was random or persistent.

Boats in seeming good position on the right had trouble getting back into the race.

Whilst very light the racing was reasonable with the whole fleet moving most of the time. It was just hard to unlock the nuances of the race course with limited time. The daily protocol is the fleet are held ashore until a signal is made and then country by country launch.

We can do a quick tune up to check rig and sail setting but not much more. Perhaps in future, if we encounter these condition we could send one or several of our coach boats out to monitor the course so we have more of an inkling of what to expect? But we do have finite resources and time.

Unfortunately we did have one crew member fall sick yesterday. Ollie Grieve from our promo boat was taken ashore, nothing too serious but hope you are feeling better and can join us today Ollie. Thanks for filling in for him, Alicia Gaffney as well.

The race yesterday was marred by a lot of protests, the final part of the trapezoid course features a hook mark at the bottom and a short beat to the finish. The distance between the last mark and the finish is generally about 250-300 metres.

In the light winds, the Race Committee decided to shorten this to about 100 metres, possibly over concerns about the time limit. Unfortunately in this particular race the fleet was very congested and this leg was quite frantic. Lots of port and star boards as 30+ boats were trying to cross the finish. It became more frantic as the infringing boats were trying to do their penalty turns at the first possible opportunity.

Then I believe a sailing yacht got in the way of a few boats on this leg to further add to the shemozzle. So lots of protests, claims for redress etc would have kept the jury busy. We had a couple but all fell our way with ours being upheld and other against us dismissed.

There is no doubt the conditions have been tough and foreign (sic) for our sailors. Australia has a very good record in the Cadet class recently in the venues with wind. But while there is some grizzling about the pot luck aspect of light airs, it must be said the sailors doing well are in the front consistently.

Argentina and Poland in particular are handling the conditions well. We just need to get better at sailing in these European lake venues. I know it is always hard to match innate skills developed over years of sailing in a week or so, similar to other countries having trouble on our home waters. But this is one area we need to improve.

We have had some sailors working hard at overcoming their frustrations and doing well of which I am very proud and appreciative. Jacob/Sam and Charlie/Laurie have dropped a bit to 9th and 12th respectively after yesterday and over on the promos Pete/Ollie with help from Alicia are lying equal second after their health issues yesterday, plus all others of our team had some of their better results. Tilly/ Will getting a 4th and others in the low teens.

Germany had their launch night last night for the 2018 worlds in Bodstedt. Big Alex assures me “better wind, good for oosie, oosie, oosie.”.

We only have one race left and hopefully it will be sailed today, forecast is very light. With a highest speed of 1 knot at our scheduled start time. A bit more is expected later in day so maybe we can squeeze the race in before 3pm which is the time limit for starting a race on the last day.

On a final note, the race committee members congratulated our team on being the only country to thank them with a wave on the finish, without exception and regardless of trials and tribulations. Thanks team, a small thing but important.