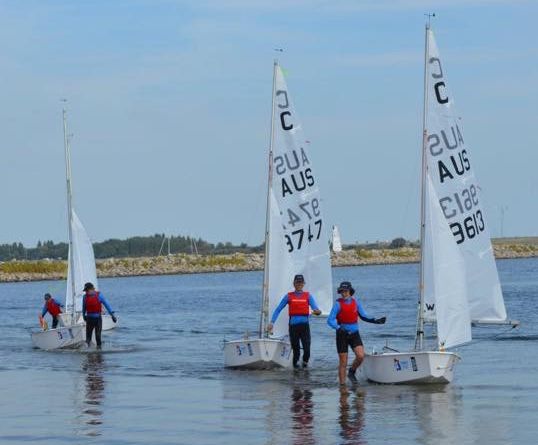 Well a nice short one today. Not a lot happened on the water, but a fair bit going on ashore.

I went down to the club and attended the daily coaches briefing. It was quite fiery with numerous complaints about the previous days last race, covered in my previous blog. My attitude as Australian Coach was whilst we couldn't change the past, we would much prefer to race in fair and even conditions even if it meant not achieving our full quota of races. This was acknowledged by the Race Committee, who in my opinion had been simply over anxious to get as many races in as possible.

I have participated in literally hundreds of sailing regattas but yesterday was a day of firsts. After my comment to them “we can't change the past”, they proceeded to do that. A lot of the others at the meeting were upset and vitriolic. A quick series of events and meetings must have been instigated and the decision was made to abandon race 6. This was a first for me, I have never known of a race to be abandoned after completion, let alone the next day after prize giving medals had been awarded.

The boats were launched and towed out to the race area. The wind refused to settle and the committee were unable to set a true course. After an hour or do the rain began to settle in and the Race Committee who may understandably be a bit gun shy after the morning events rightly decided to return to shore.

The race 6 furore then escalated with what I heard described as the “mother of all redress hearings” was held. The countries and sailors that had performed well in race 6 were naturally quite aggrieved. The upshot was that the decision to abandon was endorsed.

The other first was a DNE penalty given for inappropriate behaviour on the water for anti social behaviour by one boat against others.

In any of my coaching endeavours, we always start the first meeting with two rules that are relevant to all sports.

1- you respect the other competitors,

2- you accept the umpires decision.

The first of these two tenets is then broadened to include team mates, coaches, support and officialdom. I am sure that the vast majority of people here would be very disappointed in the behaviour of that boat. The Cadet class has a long history of comradeship and fair play which is adhered to making it and endearing trait of our class. A further point is the sailors in question are young kids who should be allowed to acknowledge the error of their ways, move on and accept the penalty with no further repercussions.

The second re accepting the umpires decision, if you disagree with it there are processes through reopening if new evidence become available or appealing to a higher level. But whilst that ruling is in place you accept it!

This is very much our team attitude in regard to race 6, we are not embroiled in the debate. But have accepted the RC judgement as stood before and after the various changes.

Did I say this was meant to be a short blog? Proposed lay day today, but in light of no racing yesterday we will be racing. Good forecast, not so great in following days.

Looking forward to getting our wonderful sport back out on the water.