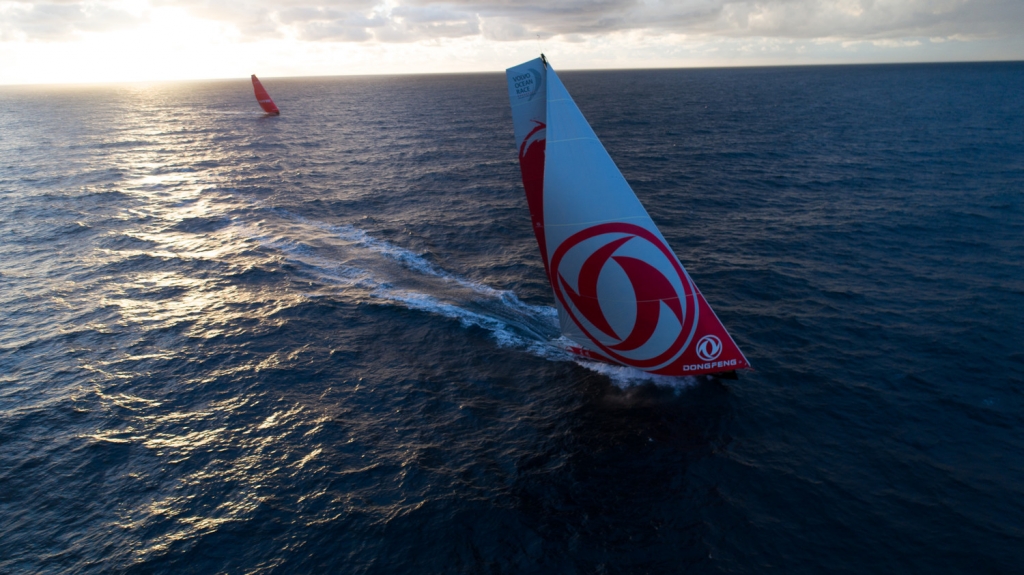 China’s Dongfeng Race Team edged out MAPFRE by just 56 seconds in a Rolex Fastnet Race thriller in the early hours of Wednesday, as an intense night of lead changes and fickle winds ended with the entire fleet separated by less than 40 minutes after more than 600 miles of racing.

Victory for Charles Caudrelier’s team keeps it tight at the top of Leg Zero qualifying for the Volvo Ocean Race – and heralds an epic battle to come when the race around the world begins from Alicante on 22 October.

MAPFRE and Dongfeng had the best start back in Cowes on Sunday, stayed close all the way around the race course and finally finished just metres from each other after fighting all the way to finish line off the Plymouth breakwater.

Bouwe Bekking’s Team Brunel were next over the line – a result that will give them a massive boost given that their preparations started so late – followed by team AkzoNobel in fourth. Vestas 11th Hour Racing, Team Sun Hung Kai / Scallywag and Turn the Tide on Plastic completed the fleet arrivals – and with just over 39 minutes between the first and last placed boats, they will be boosted by the belief that they can close the gap further by October.

Dongfeng leveraged their experience on how to set up the boat from the last race, and their crew's local knowledge of these tricky coastlines, at times demonstrating superior boat speed and superb navigational choices.

Critical moments in their victory were when they regained the lead from team AkzoNobel before the Fastnet rounding and later, perfect navigation on the return from the Rock that saw them split from the fleet on the downwind run and pass through the obstacles around the Scilly Isles with fewer manoeuvres.

Despite often leading the fleet, Caudrelier revealed at the finish that their victory was far from certain. “We were leading at the Fastnet, leading the downwind and then suddenly, in big clouds we lost everything, we were last! Then another cloud helped us to come back, but afterwards MAPFRE were still there. They came back, passed us but we passed again. It was a nice fight with MAPFRE.”

A testament to the close racing, MAPFRE skipper Xabi Fernández explained that the final finishing order was determined by one crucial gust. Dongfeng were able to furl and drop their masthead zero before MAPFRE and pass the Spanish boat when they were caught out with too much sail up.

“At the end we had a big sail and a 20-knot gust hit us, while Dongfeng had a smaller sail,” explained Xabi. “It's a pity but it was a very good race for us.”

Brunel’s third place finish – after they grabbed second in the record-breaking race around the Isle of Wight last Wednesday – was another sign that Bouwe Bekking’s team have hit the ground running after announcing their participation only recently.

“The team has done extremely well,” said the Dutchman. “They all dug in 100% and I think everyone can look each other in the eye and say for the time being we got the maximum out of the team. We learnt a heck of a lot. I think that’s the most important thing.”

There are two more races to go in the Leg Zero series of qualifiers. On Thursday, the fleet will race from Plymouth to Saint-Malo in France. After a non-scoring Pro-Am Race on Saturday, the teams will complete the series with a race from Saint-Malo to Lisbon, starting on Sunday.

While an overall Leg Zero winner will be declared, based on equal scoring for each of the four stages, no points will be carried forward to the Volvo Ocean Race itself.