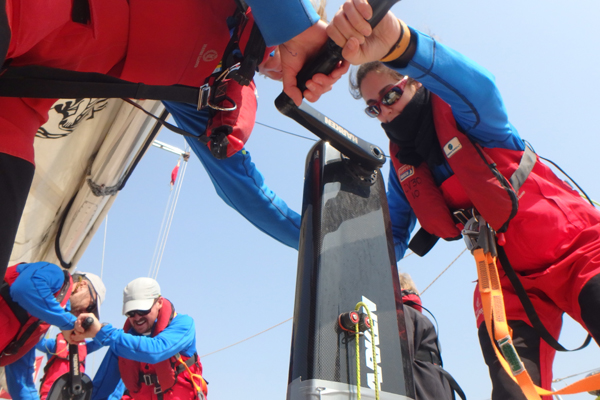 The wind and sea state has increased as the teams near the southern tip of Japan on day 3 of the Seattle Pacific Challenge.

Over the last 24 hours, there were confusing, frustrating wind shifts before the wind backed round, meaning the teams were going upwind again and were forced to take down spinnakers, but it then veered round and kites were re-hoisted, with lots of sail evolutions.

The wind is around 20 knots currently, and over the next 24 hours, it is forecast to peak with gusts in the mid to late 20’s.

Garmin is still leading the race, narrowly ahead ofDerry~Londonderry~Doire still in second and LMAX Exchange in third, withUnicef close behind in fourth place.

Conditions will likely get tougher as the teams go round the south of mainland Japan with potential headwinds and the strong Kuro Shio current, warns Clipper Race Meteorologist Simon Rowell.

“Watch out for the effect of the high mainland acting a bit like the Canaries, with acceleration zones and lees in line with the various peaks and channels, and secondly space launches from the island of Tanegashima where the Japanese Space Development Agency is based,” Simon told the Skippers in their daily weather briefing.

Daniel Smith, Skipper of Derry~Londonderry~Doire, said the sailing over the past day had been good and kept his team on its toes.

“The wind eased through the night and big wind shifts meant changes to course and sail plan keeping our brains and muscles fully engaged. We've now settled down again under spinnaker chasing Garmin around the north tip of a chain of Islands that lie in our path. Unicef popped up on our Automatic Identification System (AIS) and has made some gains through the night and look like it is heading around the south end also under spinnaker.

“The forecast of a building wind should mean we will have rounded the south tip of Japan and be joining the Kuro Shio current helping us on our journey north east by this time tomorrow – if all goes well…” Daniel added.

Matt Mitchell, Skipper of ClipperTelemed+, in fifth place, described a busy day of evolutions in his report today.

“We managed to sneak past Unicef just as we got to the line of nets, performed a quick kite change back up to our biggest before moments later the wind shifted nearly 180 degrees and we were all left going in circles for a while during which time spinnakers were dropped, Yankees hoisted and we very quickly went from downwind sailing to upwind sailing. It was all very bizarre.

“A few hours after all that the wind started to come back round closer to the forecast so up with the spinnaker again and off we went. We have been sailing some pretty high angles with the spinnaker up all day now and have come across more markers which thankfully were just individual and not joined together.

“The crew have all done a fantastic job and it was a really good refresher for all our new joiners having to perform so many different evolutions in such a short amount of time. With a little under 24 hours to go until the bottom of Japan it will be interesting to see how the fleet converges for the next stage of this race,” Matt added.

What will the conditions be like once the teams round the tip of Japan? WillUnicef catch up with the frontrunners further?