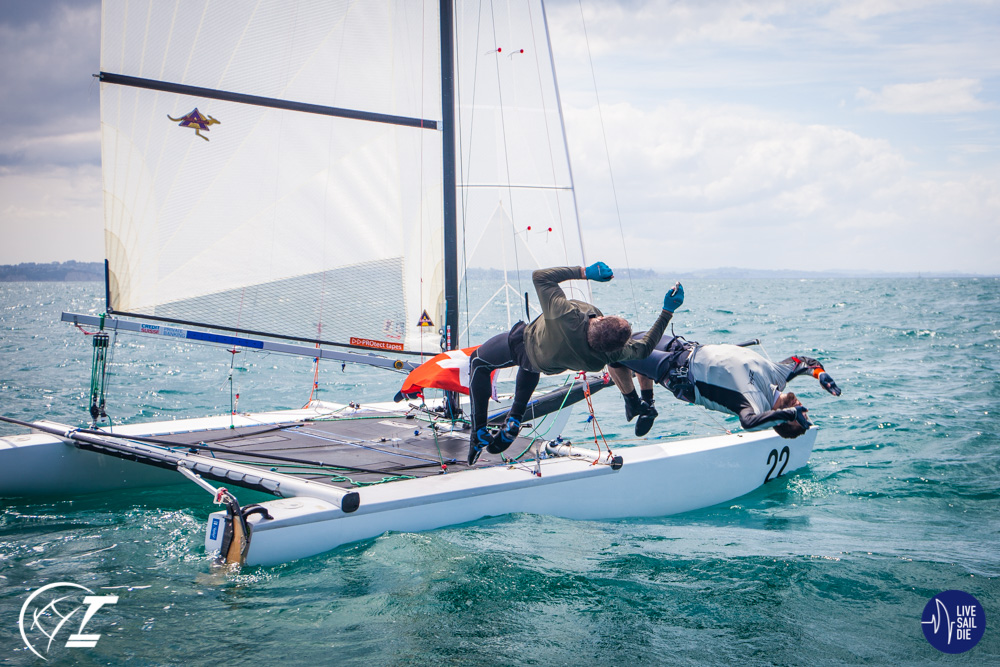 Australian duo Brett Burvill and Max Puttman are the 2019 Tornado world champions, crowned in New Zealand where the event was held, while the final race was won by famous locals, Olympic Gold and Silver medallist Rex Sellars, crewed by son Brett, a great way to end the regatta.

This is the first time Burvill and Puttman have won a Tornado Worlds, and they did so by 13 points: “I’ve won the mixed division before when I had Estela Jentsch as my crew, but never taken the overall win. I’m bloody stoked,” Burvill stated after the prize giving.

“We are just so happy we secured the win. It was a mission to get to the start line because we broke our traveller car for the jib during the last race of the New Zealand Nationals. My girlfriend’s sister, Skye, got a replacement, jumped on a plane from Perth (Western Australia) to Auckland, and we met her at the airport to collect it.

“There were none in New Zealand so she took the mammoth flight to get the part to us. Thank goodness, because without that, we wouldn’t have been able to take the championship,” Puttman said.

Second overall went to the Swiss team of Jorg Steiner and Michael Gloor, in their first regatta sailing with each other.

“I’m normally a crew, and this is the first time I have helmed at a regatta. My regular skipper could not make it to New Zealand, so Michael and I teamed up to give it a go,” Steiner said. “We are very happy – we did not expect to do so well.”

Third overall, first Youth and first Mixed Crew went to 16 year old helm Estela Jentsch from Germany and her Australian crew Daniel Brown. This is the second time the team has finished on the podium at a Tornado World Championship.

“We are happy to have third again in the Tornado Worlds and to also win the Youth and Mixed divisions,” Jentsch said. “We are very pleased with our efforts. This was a very hard regatta for us, so to win so much is wonderful.”