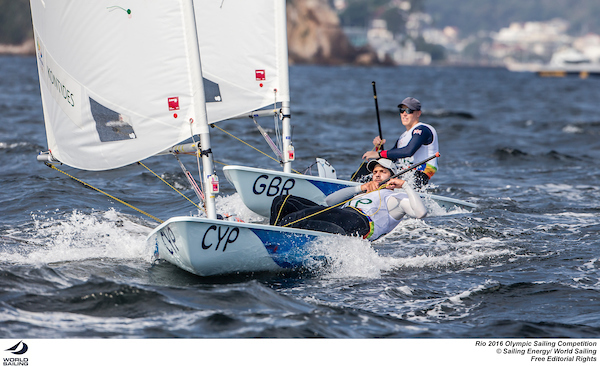 Although conditions were vastly improved at Rio 2016 today for the Laser sailors, every single one of the 46 strong fleet is now carrying a double-figure score after only four races.

With the drop now in effect, Julio Alsogaray (ARG) leads on seven points, carrying a 14 point drop, from Tonci Stiponovic (CRO) on 13 points with a 12 as his drop. New Zealander Sam Meech has been consistent with a score of (19) 3, 5, 7 and Australia's Tom Burton is on 20 after a second place and a 10th today. He is dropping his 17th from the first race yesterday.

“Conditions were better today,” Burton said after racing. “They were still tricky but not under a cliff! The shifts weren't as big and you couldn't lose 15 boats in an instant like yesterday.”

Burton said the key to his improved performance was two good starts which allowed him to tack across to the favoured right-hand side ahead of most of the fleet.

“I felt more comfortable today,” said the first-time Olympian. “I made my big mistakes yesterday and I needed to improve and I did.”

Some of the medal favourites didn't fare as well as Burton today, with former Olympic Laser champion Robert Scheidt (BRA) adding a 27th to the 23rd he scored yesterday. With a bullet and fourth, his regatta has been uncharacteristically inconsistent.

But spare a thought for current World Champion Nick Thomspn (GBR) who is now in 12th place, 25 points behind Alsogaray and with a best result of eighth. It will take a miracle for the likeable Englishman to even make the podium from here.