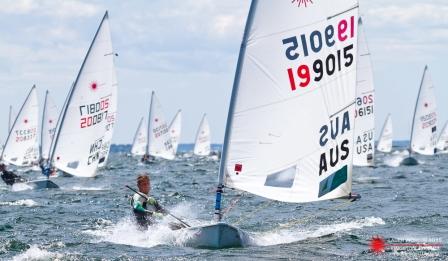 Never write of a champion! Yesterday we wrote that Tom Burton was coming under pressure from Matthew Wearn for the Laser spot at the Rio test event next month after the young Western Australian posted two wins to lead the World Championships.

What a difference a day makes! Two second placings on Day Two and the ability to drop his 19th from the opening race has moved Burton, the World Number One, into third place, just four points behind the leaders, Juan Ignacio Maegli of Guatemala and Philipp Buhl of Germany.

Wearn had a forgettable day, posting a 21st and a 12th to sit in seventh position. His reaction on Facebook was positive, however: “An extremely tough second day. With winds from 2-8 knots made for some extremely tight racing. Finished up with a 21st and a 12th. Was having good starts and was sailing well but just missed one shift. Just can't afford any small mistakes. Tomorrow is another day and will be chasing hard to move back up the rankings.”

The log jam of Australians in the middle of the fleet has been broken up, with Mitch Kennedy (20th) and Jeremy O'Connell (37th) looking good for Gold Fleet while Ryan Palk (52nd) and Luke Elliott (56th) have some work to do.

The official reports from Kingston (Canada) are very slow, but we will post them here as they come in.