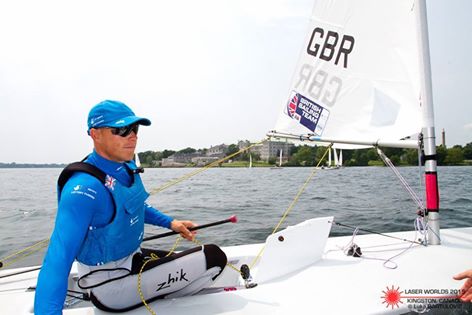 The day began with strong winds of 15 knots from the south. As the day progressed the wind lowered to 8 knots, and kept competitors on their toes with tricky conditions and shifting winds.

Previous regatta leader Philipp Buhl, Germany, had a tough day, finishing 15, 16 and 27, dropping to 3rd overall, with Great Britain’s Nick Thompson moving up to 1st. Thompson stayed at the front of the pack, playing the breeze and finishing 7, 2, 4. Thompson has a 20 point lead going into the final day of racing. Australia’s Tom Burton moved up to 2nd today with a 15, 27, 2.

Tonci Stipanovic representing Croatia moved from 10th to 4th today, with a bullet in race 1, and 3rd in race 3. He was able to drop his second race of 27, to end 1 point behind Buhl. Pavlos Kontides, Cyprus, had a strong day, placing 2nd and 6th in the first two races. He finished the last race in 12th and was able to move up in the rankings from 24th to 5th. USA’s Christopher Barnard placed 14th in the second race, and 5th in the third race to finish the day in 6th overall. Brazil’s Bruno Fontes is close behind Barnard. Matthew Wearn AUS, Charlie Buckingham USA, Sam Meech NZL and Kacper Zieminski POL sit 8th to 11th overall, with few points separating them before the last day of racing tomorrow.

Yesterday Stephano Peschiera from Peru, qualified his nation for a spot in the 2016 Olympic Games. This is the first time Peru has earned a sailing berth in the Olympics through the qualification process. Seven other nations earned their Olympic Birth by sailors qualifying for Gold fleet, with one berth still undecided. It will go to the top sailor in silver flight representing an unqualified nation. Joaquin Blanco, Spain and Alexandr Denisiuc, Moldova are the top two competitors in Silver flight who’s nation have yet to qualify.

For a full set of results: http://www.cork.org/past-results/results2015/STD/RESULTS.html