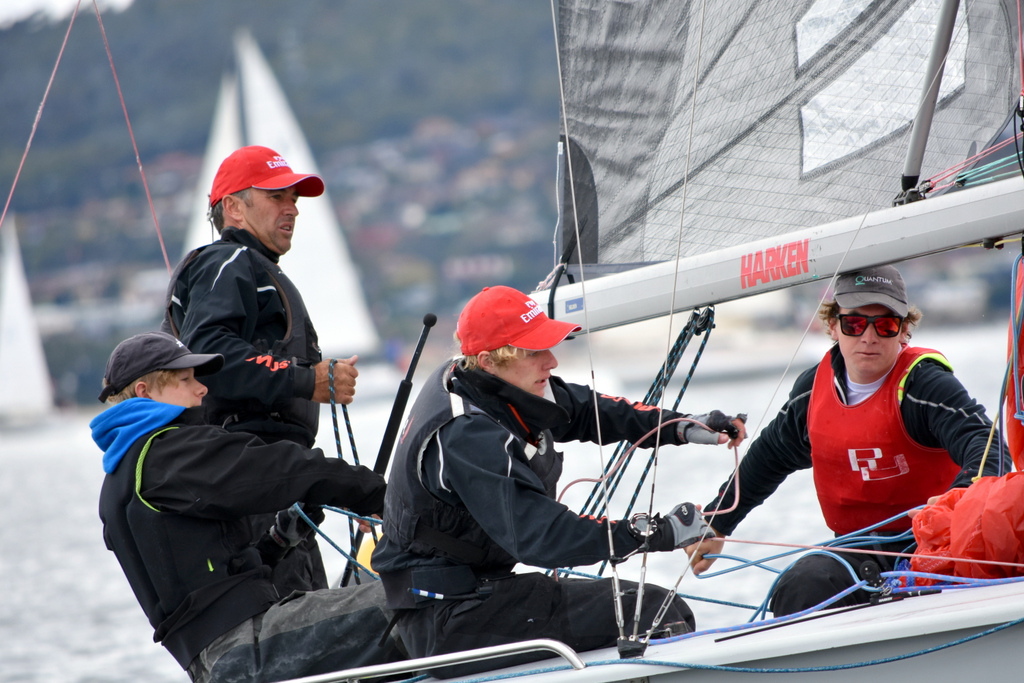 The Burnell boys from Sandy Bay Sailing Club chose the name of their father’s SB20 one-design sports boat – Honey Badger – a little animal that fights ferociously above its weight.

Honey Badger, the SB20 one-design sport boat, has proven it can do just that in racing over the summer sailing season for owner/skipper Paul Burnell, his sons Oliver (19) and Toby (18) and 14-year-old Charlie Goodfellow.

The Royal Yacht Club of Tasmania and the Derwent Sailing Squadron are jointly running all three championships, with a fleet of 80 boats expected to contest the Worlds.

Going into the final twilight pennant series for the SB20s on the Derwent this Thursday, Honey Badger is third overall in standings.

Then next weekend, March 18-19, the Burnells will take on a fleet of some 35 SB20s, including entries from Queensland and Victoria, in the Tasmanian State championship.

The Burnell family has a long history of competitive sailing out of Sandy Bay Sailing Club; father Paul won two world championships in the International Cadets as a teenager and has sailed in many yachting classes since then.

His sons followed him, both representing Australia several times at a the Cadet worlds. Charlie Goodfellow is a current Cadet sailor and will represent Australia at the 2017 worlds in The Netherlands.

“We’ve been sailing together on Honey Badger for the past year or so and we all get on well,” Paul Burnell said yesterday. “I’m the old guy in the team… they tell me what to do and where to go… I just steer the boat.”

Paul said the team’s success was largely due to the youth and agility of his crew, “They can jump around the boat so quickly.”

Oliver is the for’ard hand, Toby is on mainsheet and Charlie is the ‘floater’ in the crew, with Paul on the helm, giving an important input from his long-time experience.

“We have had a good season but we need to improve our consistency,” Paul Burnell said. “In such a strong fleet next weekend, if you make one mistake it can quickly cost you six places.

“We do have another problem leading up the worlds; with the boys all continuing to grow we are getting close to the maximum crew weight for the class,” Paul added. “But we are confident this will be the team we race at the worlds.”