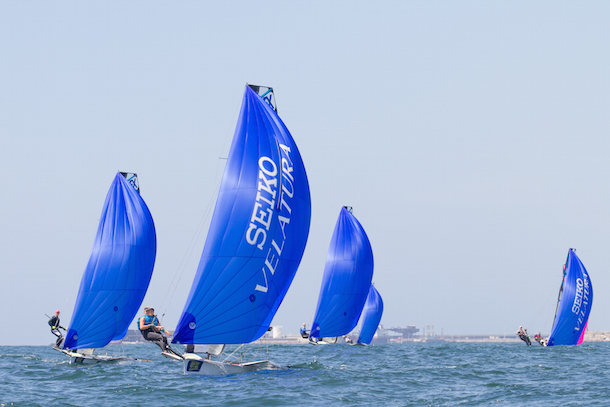 Giulia Conti and Francesca Clapcich have moved into pole position in the FX women’s fleet with one day day to go in Porto at the 49er European Championships. Meanwhile, with two days to go, Pete Burling and Blair Tuke have made their customary big move with three very solid race results that puts them at the top of the leaderboard with a big gap to the rest of the fleet.

After a delay waiting for the breeze to build on the Atlantic, the wind finally started blowing at a very steady 10 knots. In the first of the FX Gold Fleet finals races, 2013 World Champions Alex Maloney and Molly Meech got an excellent start off the pin end of the line and opened up a small lead by the first mark. The Kiwis held off an attack by the defending European Champions from Denmark, Ida Nielsen and Marie Olsen, with New Zealand taking the win ahead of the Danes.

At the next start, Nielsen and Olsen won the battle for the middle of the line and launched into the lead out to the left of the course. Like the Kiwis in the previous race, the Danes sailed away and increased their lead to cross the finish line in an easy first place. But, disaster, as Nielsen discovered that her great start was too good to be true. The Danes were disqualified for having started too early, which handed the race win to Italian crew, Giulia Conti and Francesca Clapcich.

Spurred on by their success, Conti and Clapcich got a good start in the final race of the day and led from start to finish. This time the chasing boat was the Netherlands’ Nina Keijzer and Claire Blom but, like the unfortunate Danes in the previous heat, the Dutch were disqualified for starting too early.

In the men’s 49er, the most consistent performers of the day were the young Lange brothers, Yago and Klaus, son of double Olympic medallist Santiago Lange. The young Argentineans scored 3,1,4 and leapt up the rankings into 5th overall. Next best performers were the reigning World Champions Pete Burling and Blair Tuke who scored 2,6,1. This lifts them to 1st overall and a whopping 15 points ahead of the 2nd placed team, Great Britain’s John Pink and Stu Bithell. Unfortunately for local fans, Jorge Lima and José Costa tumbled from the lead down to 8th overall. It was also a hard day for Polish team, Lukasz Przybytek and Pawel Kolodzinski, who fell from 3rd overall to 11th after three tough races.  On the polish front, on the rise are Abu Dhabi Final Champions POL 52 (AKA Superman and Captain America) who had a fantastic day to leapfrog their Polish team mates and now sit tied on points for 3rd.

Saturday sees the women complete their championship with three Gold Fleet races in the morning and a Medal Race finale on the River Douro in the afternoon. For the men it’s the penultimate day of Gold Fleet racing. The forecast is for medium airs, and you can watch all the action on the live TV broadcast which is scheduled for the start of racing on Saturday at 10.00am local time.