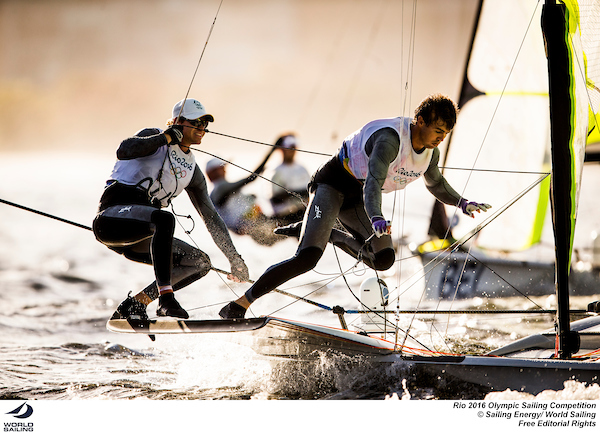 Kiwi favourites Peter Burling and Blair Tuke remain on top of the 49er table after six races of the 12 race qualifying series but are coming under pressure from the German crew of Erik Heil and Thomas Ploessel. The Germans won the first race of the day and are only three points behind after the discard has taken effect.

The Kiwis admitted that they didn't start well today but were happy with the way they worked their way back from poor positions. “The conditions were fairly tricky,” Burling said. “UYou only got one shot to get it right and sometimes we missed it. But we were really happy we worked our way back from where we were  and just happy to get through with no incidents and into the rest day.”

For defending champions Nathan Outteridge and Iain Jensen it was a totally different story. They found themselves in some good positions but poor decision making, in their own words, cost them a number of places.

“We had a good first race (when they finished second) and a good recovery when we had to do turns, but we didn't piece it together as well as we would have liked,” he said. “We made some layline errors, we went too far and got rolled by six or seven boats. You can't afford to do that in this fleet. No excuses. We just didn't make good decisions today.”

The Australians are in sixth place on 38 points, 23 behind the Kiwis, 20 behind the Germans but only five behind the third-placed Danes, Jonas Warrer and Christian Lubeck. Tomorrow is a rest day and they said they would come back for the second half of the regatta determinded not to repeat their mistakes.

Here's how the races panned out:

In the first race of the second day of 49er racing at the Rio Olympics, Nathan Outteridge and Iain Jensen gave their Kiwi rivals some grief. Both tacked on to port immediately after the start and the Australians were able to sit on the Kiwis, forcing them to tack away. Another double tack for Peter Burling and Blair Tuke had them uncharacteristically towards the back of the fleet while the Australians raced away towards the lead.

The Germans were sailing an excellent race and despite their best efforts downwind towards the finish, the Australians had to settle for second. Burling and Tuke had made up some ground, but a bad line into the finish caused an extra gybe and they just failed to snatch fourth place from Ireland.

Neither of the favoured crews got a great start in the second race and Burling got his own back on Outteridge at a port/starboard cross, causing the Aussies to do a penalty turn. In fast boats like the 49er such a manoeuvre is costly and the Aussies were all but bringing up the rear.

At the top mark the Irish rounded just ahead of New Zealand and the Aussies were 13th of 20. A split ensued, with Australia going to the less favoured left-hand side of the course. For once it paid and although the Kiwis were still in second behind the Irish, The Aussies had worked their way back to seventh.

Again there was a split and this time the Kiwis went left and the Aussies followed the Swiss up the right, along the shoreline. The Australians again lifted through the fleet and when they reached the layline the Kiwis tacked on them, so close had they come. It was a drag race into the mark with Ireland, New Zealand, Germany and Australia in a bunch. The Swiss came in on port and tacked on the Aussies, but they had picked up to two more places.

All the top boats went down the run on the same side, making it a procession to the finish. Ireland won by 11 seconds from the Kiwis. Despite having to throw in an extra gybe, Germany and Switzerland just held off the fast-finishing Aussies. The gap between New Zealand and Australia was exactly as it had been at the start of the day.

Again the Kiwis and Aussies weren't the best off the line and Outteridge's chances weren't helped by having to duck the Kiwis and two other boats as he came across on port, heading for the favoured right-hand side. That move worked and at the next cross he was clear ahead of all three. He immediately tacked and covered them as they all beat towards the right.

The Kiwis went round the left-hand gate and that worked. When Outteridge and Jensen tacked on to starboard they passed behind the Kiwis who were still heading to the right. Up in front, France, Denmark and Austria were putting a gap on the rest of the fleet.

Sailing close together, the Kiwis and Aussies made up some ground, rounding the top mark for the second time in 11th and 12th, but this time it was the Kiwis ahead.

Denmark had now gapped the fleet and they won comfortably from France, while Austria just pipped USA for third. Behind them there were crazy gybes thrown as the wind fluctuated. The Irish and Germans had been locked on seven points before this race and had sailed side-by-side. The Irish paid dearly for gybing early and finished 14th to the Germans fifth. New Zealand moved up to eighth and the Aussies were 11th. Advantage Kiwis.

To make up for the chaos of yesterday, the 49ers sailed a fourth race although only three were scheduled.

It was tight at the first mark, with the Kiwis coming in on port and eight boats approaching on starboard. They found a hole and ducked around in sixth, one ahead of the Aussies. Up front it was Croatia, Belgium and China who were the first three around.

Staying on the right-hand side worked for Outteridge against the Kiwis, putting three boats between them. They separated and at the next cross the Kiwis had gained but the Aussies could tack into their air and force them to go left again. In turn, the Danes slam-dunked the Aussies and they headed towards the Kiwis yet again, who again had to duck them.

The Croatians had cleared out and went round the top mark more than 100m clear of Japan, France and Belgium. Australia and New Zealand came together again and it was a drag race into the turn. The Aussies slipped around ahead but struck trouble and the Kiwis could lift out from underneath and put some time into them.

That run hurt the Australians badly. They were down into 10th while the Kiwis had climbed to fifth and continued to sail away on the third beat.

Croatia, Japan and Belgium were the first three around. New Zealand was sixth and Australia was back in 12th. And that was the way they finished.