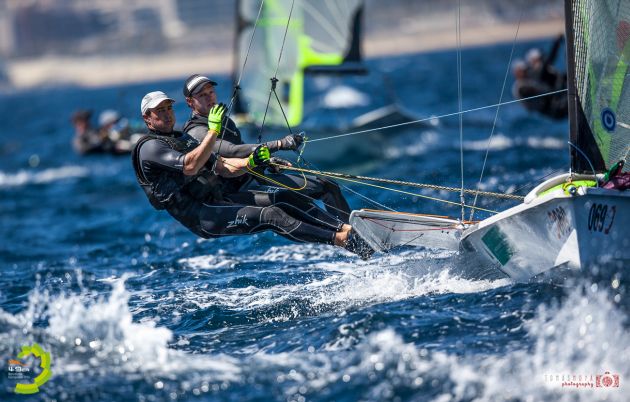 Tamara Echegoyen emerged as an afterthought in London to claim the Gold medal in the women’s Match racing in 2012. The pundits all promoted their favorites, some of the biggest names in the sport of sailing but Echegoyen was unflappable and beat them all to claim gold. Teaming up with Berta Betanzos, a 470 World Champion, should have put them into the favorites category for Rio 2016, but they stumbled and struggled somewhat in the transition to skiff sailing, putting up solid results but nothing to grab headline attention.

In the lead up to Rio 2016, when the Danes, Brazilians, Kiwis, and Italians are seen as favorites, it’s the Spanish showing they should be seen as top contenders. In the final race of the 2016 49erFX World Championship in Clearwater the duo waited until the last lap to secure their first World Championship as a team. The Spanish fans went crazy online, posting over 1000 messages of support on the live youtube links sending their love and support across the Atlantic.As the Olympic circuit shifted to Barcelona, the Spanish fans are able to show their support from much closer proximity as they surged into the lead.

Sporting a 3, 7, 1, to open up the Gold fleet racing, which included a capsize in the race they finished 7th, Echegoyen and Betanzos are showing they are contenders. Unlike in the 49er, where Burling and Tuke are once again a country mile ahead of the closest competition, the 49erFX title fight is bound to be close for the duration.

Post-race discussion with the Spaniard gave clues as to how well they are trusting what they see on the water, a critical skill in sailing. After two straight races where the fleets marched left on the course to find more wind, the Spaniards spotted the right looking good in before the final race, noted a small shift in the wind direction, and changed their starting plans accordingly to take advantage. The right proved mighty, and they took the win.

It’s that kind of belief in their understanding of the racing moving the Spaniards up the rankings this week, as shown the SAP Sailing Analytics regatta tracker. For in depth race analysis, go to the replay and data tables.

Only one point back in second place are 2015 World Champions and defending European Champions, Giulia Conti and Francesca Clapcich of Italy. The Italians are becoming some of the most consistent performers in the fleet, rarely having a bad day and certainly not a bad event. There seem to be so many teams that could take the title in Rio, by the Italians putting themselves in the medal fight regatta after regatta could really increase their odds of pulling a medal in Rio.

In spite of what the top of the scoreboard might say, it’s the Dutch team of Bekkering and Duetz that are sailing the best right now. They won Palma last week by a large margin, and have already won 6 of the 10 races they’ve competed in here in Barcelona. In an odd move, the Dutch duo decided to take the day off yesterday, thinking that they had so many championships this month that they didn’t want to burn out, they returned to racing today to post a 1, 1, 3, and climb all the way back up the table to 5th. By regattas end if they keep sailing in this manner it may not matter and they could still claim the title, whether they’re aiming for it or not.

It was an average day for the leading Australian team of Tess Lloyd and Caitline Elks.Three double-figure scores (13, 12, 10) saw them hold 11th place, tantalizingly close to the top 10 who will contest the medal race after six more qualifiers. Olivia Price and Eliza Solly moved up to 14th with a scoreline of 9, 3,15 but are 26 points behind Lloyd and Elks.

The other Australian pairing, Haylee Outteridge and Nina Curtis, has withdrawn from the competition after Haylee was hit by the boom during a capsize. They are taking a few days off to give Haylee a chance to recuperate.

Over on the 49er course, Burling and Tuke continue to put on a master class the likes of which sailing may never have seen if they can hold through to Rio. If they win out the rest of this regatta, Hyeres, the South American’s and then of course Rio itself, Burling and Tuke will have won 28 straight 49er regattas, and won every regatta of an entire quadrennial. While teams were impressed with their performances back at the 2013 World Championship in Marseille or the 2013 European Championship in Aarhus, it was generally assumed that once the fleet really got into the quad and everyone was at top capacity, the fleet would claw them back, as it always seems to be able to do in Olympic classes with so many minds fighting for every inch and relatively few equipment variable to leave systemic gains hidden.

Clawing back the Kiwis has not happened, far from it. Their wins in Buenos Aires for Worlds 2015, Clearwater for Worlds 2016, were both by untouchable margins by the end, and they are 34 points ahead of second place already.

Nathan Outteridge and Iain Jensen sit nicely in second overall after a pretty great day of gold fleet racing having scored only 18 points from three races, but must face the fact they fell 10 points farther back of their biggest rivals. It must be uncomfortable territory for the London 2012 Gold medalist, but with another three months of solid 49er work to put in there is no counting them out.

Having the second best day of all was one of the teams tied on 103 points last night to squeak into gold fleet. The Lange Brothers were only a point away from missing the gold fleet cut off, but in a showing of how deep the 49er fleet is these days pulled all the way up to 12th after scoring a 7, 3, 2, on the day.

“We would have won the last race, but Burling and Tuke just kept shortening our lead. Every tiny error we made they would pull back some meters, until they were passed us. They are incredible.”

Lange and Lange have been out to New Zealand to train quite a bit lately as Burling and Tuke invited them to train. Unlike four years ago when Outteridge and Jensen opened up quite a bit to Burling and Tuke, the Lange brothers aren’t brought all the way into the Kiwi camp, but even training with such great talents is enough to rub off it seems. (Footnote: The Lange brothers were disqualified from race 10 after a boat-on-boat incident.)

On a bright note for the Danes, CP Lubeck, new crew of 2008 Gold Medalist Jonas Warrer won his first 49er Gold fleet race today by taking the second race of the day.

In the British selection fight, Pink and Bithell had an average day but sit in the Bronze medal position. All the way back in 16th are their rivals, Fletcher and Sign, 50+ points behind. If Pink and Bithell can hold and unless Fletcher Sign pull off some magic it could be over for the 2016 Worlds bronze medalists. With 6 races and potentially a medal race the final two days will be pretty intense.

Racing was double delayed to start the day, initially for 90 minutes while the race officers waited for the sea breeze and then for another 60 minutes on the water while it stubbornly refused to build as expected. When it did finally arrive, it made for fantastic conditions, up to 12 knots in the first race and then 18 knots in the second race finally subsiding to 15 knots in the third race. The waves build up to challenge the sailors without ever pushing them to back off, all making for an epic day of open water racing. At the time of posting the Silver fleets continue racing in the fantastic conditions ensuring the entire fleet gets a good workout.

Racing continues on day 5 with three more races scheduled for all fleets, with SAP Sailing Analytics live tracking available for gold fleets. The final day, Day 6 has three races for all fleets scheduled plus a medal race for the top 10 in each fleet. Catch all the action, results, photos, video, tracking and more.

Here is a vid from yesterday's action.