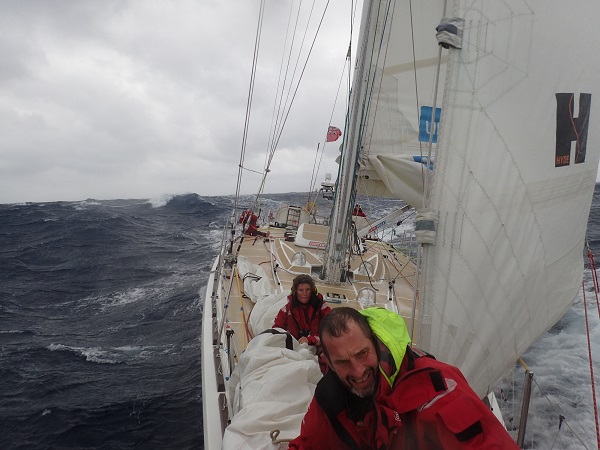 The Da Nang New Discovery of Asia Race has continued at a fast pace. Derry~Londonderry~Doire maintains the fastest time across the Ocean Sprint, with eight teams now having completed the time trial, and it continues to lead this race by around 115 nautical miles over the duelling pair of GREAT Britain and Garmin, with Qingdao further west, followed by LMAX Exchange and Da Nang Viet Nam, as at 0900 UTC.

Due to the close proximity of way points, at the south end of the extended circuit route, the Race Viewer has used different ones for different boats, making the race standings leader board misleading. We are currently working to correct this.

Derry~Londonderry~Doire skipper Dan Smith reported: “We've had a very windy 24 hours and for the second day have clocked a mileage of well over 300 nautical miles. We spent some time under spinnaker yesterday but high winds and tricky sea states meant that the sensible option was to bring it down for the night. As it came down the wind increased and we've been seeing gusts of 45 knots through the night so we had made the right decision.”

GREAT Britain skipper Peter Thornton described the confused bucking bronco sea conditions vividly: “The sea and swell is confused with side swipes coming out of nowhere. If you can imagine towering waves coming from the starboard quarter with sets of secondary and tertiary swells getting mixed in there as well, you end up with great triangular holes forming either right in front or by your side. The boat tips nose down like a horse dropping into a water jump, pauses and then accelerates surfing and lurching from side to side as the helm battles to maintain control. Day and night. The decks are awash constantly with waves or spray and it's tiring stuff for the watches. They're doing well but will be glad when it abates a little.”

As the fleet has continued to maintain high speeds in the strong Monsoon winds which have extended further south, the course will have to be adjusted further to maintain arrival in Da Nang, as originally planned, from 17 February. It will see the teams complete a circuit heading back North East away from the Vietnamese coast and then west back towards Da Nang.

However, a number of way points have been included in anticipation of slower progress upwind so that the course can be shortened if required and teams will be able to turn west earlier to maintain the desired ETA into Da Nang.

And for ‘home’ team Da Nang- Viet Nam, it has found time for some cultural learning despite the relentless briny conditions. Skipper Wendo Tuck says: “For today’s blog see yesterdays; yes folks a bit like Ground Hog Day out here right now. The wind is still the same, a tad too much for a kite; the seas are still a bit messy and large’ish. The sky is still grey but today is the 7th so one day closer to Da Nang, which is a great thing. We learnt a little about Tet today (Vietnamese New Year), ‘shame we won’t be there to celebrate it.”

Follow the action on the Race Viewer as the Da Nang New Discovery of Asia Race continues.