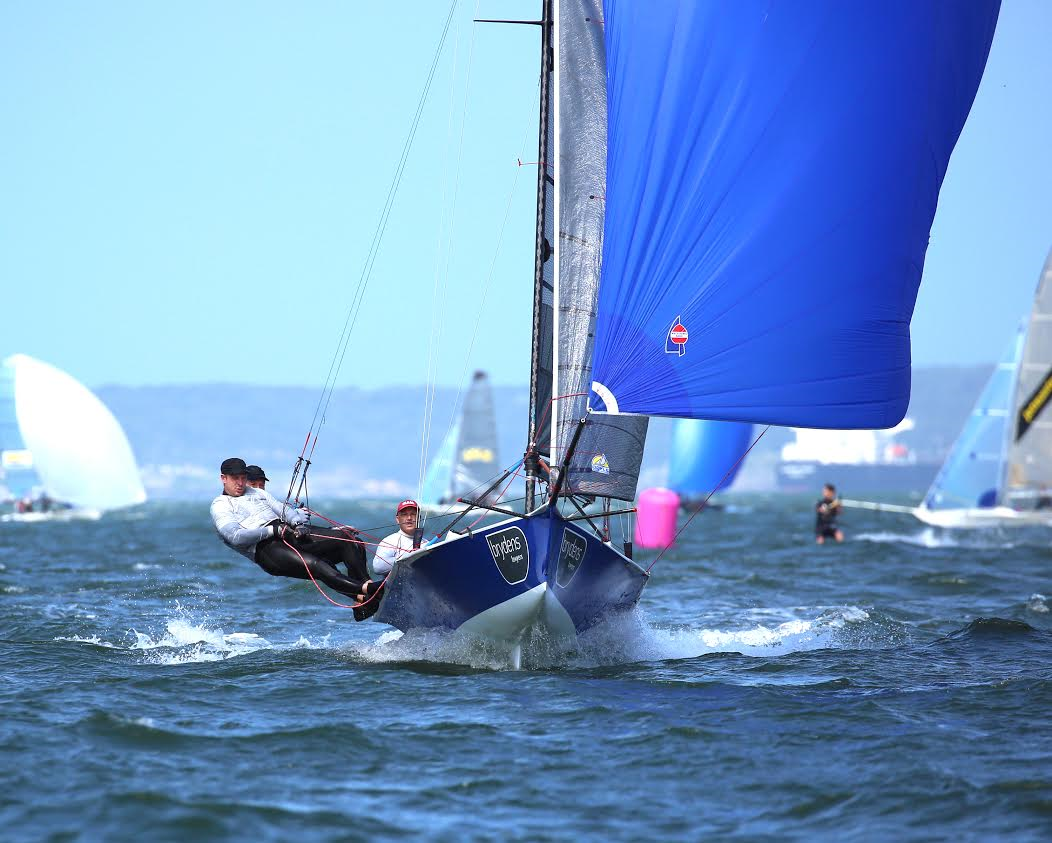 The 2015/16 16ft Skiff National Championships were a close fought battle between Brydens Lawyers and Fire Stopping. With one point separating the boats, the championship was still up for grabs until the final race. After patiently floating in the Bay for 2 hours the final race was abandoned due to lack of wind. Congratulations to Brydens Lawyers, from the Manly 16ft Skiff Sailing Club in Sydney, who are now National Champions for the fourth consecutive year.

With a 10-15 knot East-South-East breeze forecast, competitors and race officials were confident that the full seven race series would be completed as scheduled.  During the morning, the breeze came in from the East at around 8-12 knots.  However, as the boats started to hit the water for the scheduled 1.00pm start, the breeze started to fade and become variable as the sky started to cloud over.

Race officials and competitors floated around the Bay for over 2 hours as the breeze was very patchy and coming from several different directions at various times making a fair race impossible.  By 3.00pm, race officials abandoned any further racing in accordance with the Sailing Instructions which provide that, if a race cannot be started by 3.00pm on the last day of the series, no further racing can take place for the series.

Handicap honours went to “RW Retail” skippered by Josh Franklin and crewed by Daniel Smith and Patrick Hanlon from the Darling Point Sailing Squadron in Brisbane. They finished on 20 points (2-5-4-2-7-16).

With the breeze from the last few days fading overnight, the sailors woke to a light and variable 4-6 knot North-West to North-East breeze.  By the scheduled start time of 11.00am for Race 5, the Race Committee was unable to set a fair course, with the fleet just having to float around the Bay patiently waiting.

By midday, the breeze appeared to have settled into the North-North-East, however, just as the race entered its final starting phase, there was a shift to the East-North-East with an 8-14 knot breeze.  The Committee reset the course and the race finally got underway at 12:10pm.  Queenslander “Madison Technologies” (Trevor Koreman) lead around the top mark and continued to hold their lead after the first time around the course from “Fluid Remedial” (Matt Stenta), “Botany Access” (Chris Thomas) and “TAS Realty” (Dan Watterson).

“Madison” held their lead until the third work when they were overtaken by fellow Queenslander “RW Retail” (Josh Franklin) who was also revelling in the lighter conditions.  “RW” led around the top mark from “Fluid Remedial”, “Madison” and “Brydens Lawyers”.

“RW Retail” held their lead to win by 42 seconds from “Fluid Remedial”.  “Brydens Lawyers” managed to scrape into 3rd place by a mere 20 centimetres from “Madison Technologies”, pipping them right on the finish line.  Handicap honours went to “Blacksmiths Family Meats” (Grant Sheldon).

During the lunch break, the breeze faded again and went to the North at around 4-6 knots.  By the scheduled race start time (3.00pm) for Race 6, the breeze remained light and variable. At around 3.15pm, it had freshened slightly to around 7-12 knots and the Race Committee was able to get the race underway after one false start with a general recall.  “Madison Technologies” continued their excellent morning form to once again lead around the first mark.

By the second time to the top mark, however, “Fire Stopping” (Joe Turner) had a narrow lead from “Brydens Lawyers”, followed by “Madison” and “RW Retail”.  By the third work, the only change was that “Madisons” had once again overhauled “Brydens”.

“Fire Stopping” continued to hold their lead and went on to win by 53 seconds from “Brydens Lawyers” who had once again regained 2nd place and held it from a fast finishing “RW Retail” who were only a mere 13 seconds further back in 3rd place.  “Madison Technologies” finished 4th, a further 22 seconds behind.  Handicap honours went to “Chapman High Performance Sailing” (Evan Darmanin).

Race 4 got away at 11.24am after one general recall and in a 15-22 knot South-East breeze.  “EmptyJets.com.au” (Rob Flanagan) led after first round of the course, closely followed by “Fire Stopping” (Joe Turner), “Andrews Meat” (Greg Searant) and “Coastal Shipwright Services” (Matthew Rhys-Jones).  By the second time around the top mark, “Fire Stopping” had moved to the lead followed by “EmptyJets” and “Sutech Building Consultants” (Daniel Turner).

By the third time around the top mark, “Fire Stopping” maintained a slender lead from “EmptyJets”, but they were closely followed by “Brydens Lawyers” (Lee Knapton) who had gradually moved their way through the fleet after a poor first work.
The final work to the finish saw “Brydens” work their way into second place, finishing 53 seconds behind “Fire Stopping”, with “Sutech Building Consultants” finishing a further 37 seconds behind in 3rd place.  Handicap honours went to “Madison Technologies” (Trevor Koreman) from Darling Point Sailing Club in Brisbane.

After a lunch break, Race 5 got away to a clean start at 2.39pm in a freshening 15-25 knot East-South-East breeze. “Sutech Building Consultants” led at the bottom mark after the first round of the course from “TAS Realty” (Daniel Watterson), “Coastal Shipwright Services” and “Brydens Lawyers”.  “Sutech” held their lead around the top mark the second time, but were closely followed by “Fire Stopping” who had picked some good breeze shifts up that work and “TAS Realty” and “RW Retail” (Josh Franklin). Conversely, “Brydens” had slipped back to 8th place.

“Fire Stopping” and “Sutech” continued to fight it out for the remainder of the race, but “Fire Stopping” held on to their lead to win by 17 seconds from “Sutech” with “RW Retail” only a further 19 seconds behind in 3rd place.  Handicap honours went to “TAS Realty”.
The Championship is still wide open, with “Fire Stopping” leading on 9 points (3-4-1-1) from “Sutech Building Consultants” on 10 points (2-3-3-2) and “Brydens Lawyers” on 17 points (1-1-2-13).  These points do not allow for dropping a boat's worst heat, as that does come into place until at least 6 heats have been completed.

After two general recalls, the fleet finally got away on the third start.  “Brydens Lawyers” (Lee Knapton) led around the first mark and was never headed to finish 23 seconds ahead of “Sutech Building Consultants” (Daniel Turner) with “Fire Stopping” (Joe Turner) a further 8 seconds behind.  Handicap honours went to “Ross Bell Electrical” (Ross Bell).  Despite the challenging conditions, 29 of the 35 starters completed the course.

Race 2 got underway at 2.47pm.  After dying to around 10-15 knots just prior to the start, “ATB Morton” (Danny Anderson) got away to a good start, leading by around 20 seconds around the first mark followed by “TJS Services” (Henry Makin), “Sutech” (Daniel Turner), “Brydens Lawyers” and “Fire Stopping”.

With the breeze gusting to 30 knots at times, positions changed several times, with “Brydens” and “Sutech” challenging “ATB” throughout the race.  “Brydens Lawyers” gained a narrow lead on the final work to win by 7 seconds from “ATB Morton” with “Sutech Building Consultants” a further 11 seconds behind. Handicap honours also went to “Brydens”.

Despite the challenging and, at times, very strong winds, 31 boats managed to complete the course.  Surprisingly, but very fortunately, only a couple of boats suffered damage.

Racing continues tomorrow on New Years Day with two races scheduled, the first at 11.00am, the second at 2.30pm.

With two races scheduled the Race Committee met at 9.30am to consider the weather situation.

With the conditions on the Bay at that time already being 15-22 knots (gusting to 25), and with the forecast being to increase to a similar strength to yesterday (gusting to just over 30 knots), the Race Committee unanimously agreed to postpone racing for the remainder of the day.  It was also agreed to amend the Schedule of Races with two races to be scheduled for Thursday, Friday and Saturday and the final race on Sunday.

With the breeze freshening in from the South-South-East at between 15 and 30 knots from early morning, the Race Committee met at around 11.30am to consider whether racing should be abandoned.  It was decided to review the situation at around 1.00pm after an on-water assessment.

After meeting to review the on-water report, the Race Committee decided to go ahead with Race 1 as scheduled at 2.00pm.  The breeze had settled somewhat to 15-22 knots.

With the majority of the fleet electing to race, the Starter's Boat was on-station by around 2.00pm with the start line set.  Just prior to the sounding of the warning signal, the breeze freshened again, with gusts up to 32 knots.  With a number of boats capsizing and the seaway increasing, the PRO decided to abandon racing for the day.  Crew safety and the high risk of damage to boats were the primary reasons.

Two heats are scheduled for tomorrow, Wednesday, with the first race at 11.00am.  Unfortunately, the breeze is not forecast to start to ease until Thursday/Friday, but a decision on racing will be taken on a day to day basis.