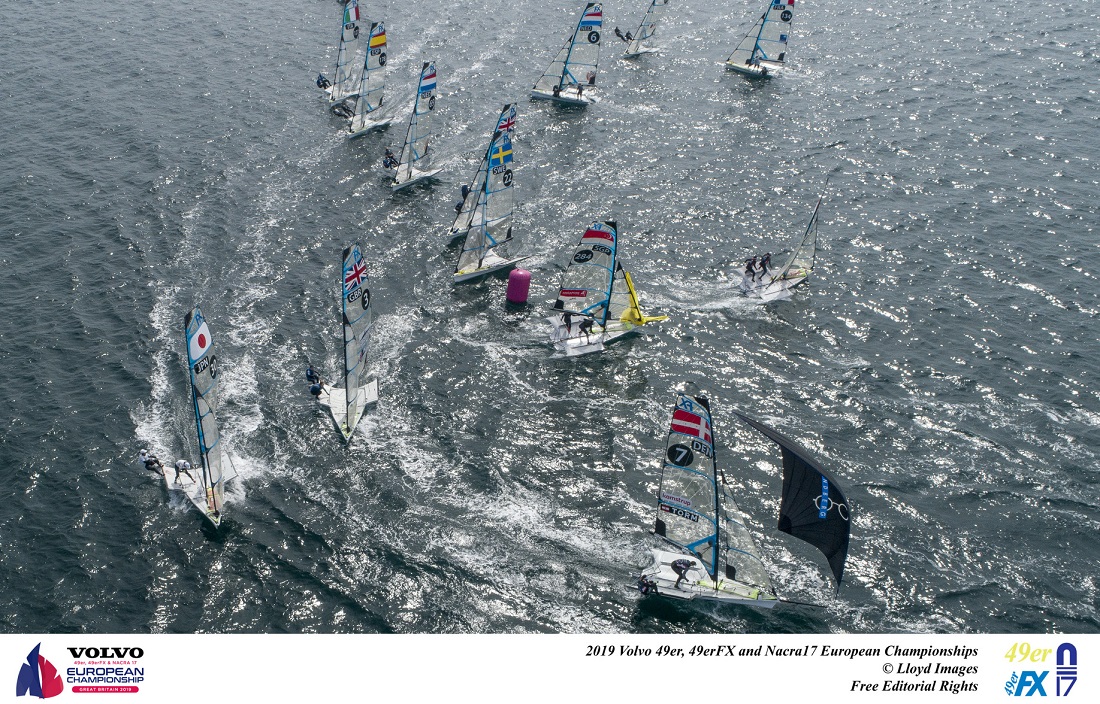 They got off to a shaky start in the first two races at the 49erFX Europeans in Weymouth two days ago, but the Australian Sailing Squad’s Natasha Bryant and Annie Wilmot have been upwardly mobile since, moving up to 12th place on Day 3.

Bryant and Wilmot added a pair of fourth places and a second to cap off a good day on the water, to shoot up six places in the overall standings.

“We had a pretty consistent day. It was a lighter; 10 knots inside the Harbour. It was pretty much our conditions, so we were comfortable in them,” Bryant commented.

Sailing partners since 2014, Bryant and Wilmot won the 29er title at the 2016 ISAF World Youth Championships. Today Bryant spoke of their improving performance in the 49erFX: “We’ve had a lot of practice from the last two regattas in Genoa and Palma, in conditions that are our weaknesses (very light winds).

“Even the beginning of this week was hard (heavy winds), but we seem to be improving in all of them. It’s good, because the rest of the week is forecast to be lighter, so we will be tested again.”

The NSW athlete said being on the receiving end of a U flag (for prematurely starting) in Race 2 is not something to forget. “We have to keep that in the back of our minds. It puts us under a little pressure, because we can’t afford those, but the rest of our starts are going pretty well.”

All three Australian 49erFX teams took advantage of the lighter breeze to move up the leaderboard. Tess Lloyd and Jaime Ryan turned earlier misfortunes around. They added a win, seventh and ninth places to their tally, climbing 12 places into 17th overall. Amelia Stabback and Caitlin Elks moved up two places to 25th after a best result of eighth in Race 7.

In the 49er, brothers Will and Sam Phillips are still in the hunt following a pair of fourth place finishes, but stumbled in Race 9 with 19th place dropping them to fifth overall. It is costly when you consider Rio gold medallists, Peter Burling and Blair Tuke (NZL), whose worst result to-date is a fifth place.

“As usual, it was about getting clear and staying in phase with shifts,” Sam Phillips conceded. “In the first and last races of the day we managed to do that, but in the second race we struggled to get clear. If you fall off the front row of the pack in a fleet like this, it’s quite tough to come back, because there’s very few lanes to make that happen.”

Phillips, who was making repairs to the boat while his brother sat in the protest room over an incident in Race 8, conceded there was always room for improvement. “For example, we were quite disappointed in our second race. On the other hand, we’ve been working a lot on our boat speed lately, focussing on that, and it’s a relief to know our efforts have worked somewhat.”

Conditions on Portland Harbour were lighter than the past two days. “Lighter than forecast too,” Phillips commented. “It was still wavy, but just a bit smaller due to the lighter airs. Reduced breeze meant closer racing, which has tightened things up a bit.”

Tom Needham and Joel Turner returned better results in the class, with three finishes inside the top ten. Their best result was second in Race 8, helping them move up to 35th overall. West Australian brothers, David and Lachy Gilmour also moved up; from 41st to 37th overall courtesy of third place in Race 9.

It was a better day for Jim Colley and Shaun Connor too. Eighth and fourth places have lifted them up into 39th overall after three further races in the 49er. However, Kurt Hansen and Simon Hoffman have dropped to 42nd overall, unable to find their form.

In the Nacra 17 multihull, Australians Nathan and Haylee Outteridge dropped once place to 15th overall, while Paul Darmanin and Lucy Copeland picked up a place to 21st overall. The Outteridge siblings posted a pair of 11th places and a seventh, while their Australian counterparts scored 4,13,9 results.

The 49ers were away first on Portland Harbour from 11am local time and sailed three races each. The 49erFX and Nacra 17 classes started their three races from 1pm.

Racing at the 49er, 49erFX and Nacra 17 European Championships continues in Weymouth, UK, from 11am local time Thursday, where the Australians are facing the world’s best as they strive towards selection to the 2020 Tokyo Olympic Games.