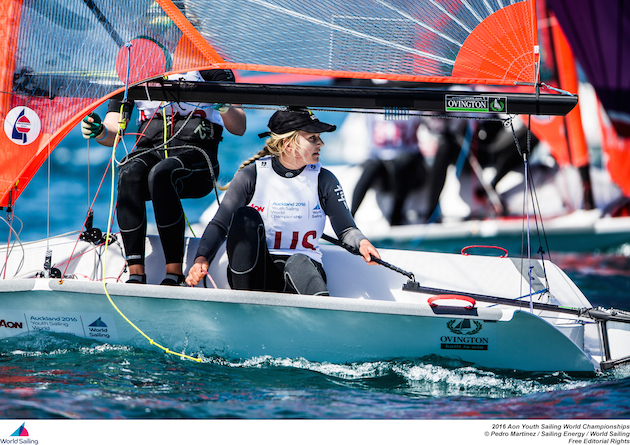 It's tight at the top of the 2016 Aon Youth Sailing World Championships Laser Radial fleets as the discard came into play, allowing a chosen few to start forming breakaways from the rest of the field.

Conditions were mixed on the Hauraki Gulf as a light 4-6 knot breeze dialled up later in the day to the mid-teens. The mixed breeze brought mixed results as light wind specialists excelled one minute and suffered the next, and vice versa for the sailors who thrive in strong breeze.

Laser Radial leader Patrick Doepping (DEN) had mixed fortunes. Doepping finished day one with two bullets but in Saturday's racing the Dane fell right to the back of the fleet finishing a lowly 37th, “I think the difference is I am a full rig sailor,” explained Doepping.  “I am 80-82 kilos so for me in the light breeze it's very hard to keep the speed. In the strong breeze I don't have the disadvantage I have in the light breeze and that's why I didn't do well today.”

Doepping followed up with a seventh as the conditions fell in his favour enabling him to discard his 37th. Despite a self-proclaimed disappointing day, Doepping remains ahead of the fleet and isn't letting this affect his mentality, “I have been very calm and haven't been in any situations so far. I will keep doing what I've done over the last couple of days and avoid any mistakes.”

Only four points separate the top five and Doepping's discard could play a big role at the end of the week if he does get in to any situations. Doepping will have to keep watch as Great Britain's Daniel Whiteley is ready to pounce, looking to move up from fifth. Whiteley has been sailing near the top of the fleet in every race so far, but it's not good enough, or great enough for the Briton, “It was pretty challenging out there today. I got a sixth in the first race and a 13th in the last race so I'm not too happy, but it leaves me in contention.

“Tomorrow I can go out and do a bit better and climb the leaderboard. I haven't properly messed up yet. I'm consistent and hopefully I can make it consistently great rather than consistently good.”

Whiteley's discarded 13th is better than those around him and that gives him a little breathing space, “Maybe I have a little less pressure, but you can't think like that. We've got another three days, another five races and that's over half the championship so we will have to see how it shapes up.”

Sandwiched between Doepping on top and Whiteley in fifth is George Gautrey (NZL) in second, Dominik Perkovic (CRO) in third and Finnian Alexander (AUS) fourth.

It was Sandra Luli's day in the girl's Laser Radial and the Croatian remains on top. Talking through her day Luli said, “Today it was light winds. Compared to yesterday, tactics and speed was more important as the wind was always changing. In the first race I finished eighth and second race I finished first.”

Luli can discard her eighth place finish which gives her a nice six point cushion over Rio 2016 Olympian Dolores Moreira Fraschini (URU) who discards her 17th and counts her second.

Sitting is third is Germany's Anderssohn who summed up the day for just about every Laser Radial sailor in Auckland, “For me I think it wasn't such a good day. The first race was okay but the second wasn't very good. I think it changed a lot and everyone had a bad race. It was very shifty so you don't know where to go and there was less wind. It was hard conditions.”

Of the day one frontrunners defending champion and Rio 2016 sailor Maria Erdi (HUN) dropped down to fifth after a 15th and a UFD, which she discards.

Erdi came ashore after racing and was left confused about her performance, “There are some pretty good people here, but I just wasn't expecting myself to do this bad in shifty winds.” The Hungarian will have to sail smarter for the rest of the championship to stay in contention.

Unlike the Laser Radial sailors, France's Tim Mourniac and Charles Dorange seem to flourish in any conditions in the Nacra 15 and proved it on day two with a bullet and two second places. They have a ten-point advantage over Romain Screve and Ian Brill (USA).

If the French were fantastic then Israel's Yoav Omer was truly magnificent in the boy's RS:X. Omer was unbeatable, won three out of three on day two and now holds a healthy 16 point advantage over Mack van den Eerenbeemt (ARU) in second. After the Aruban, it's tight back to fifth before a ten point separation from the rest of the fleet.

Not quite hitting the heights that Omer reached, but coming pretty close, was Great Britain's Emma Wilson. Wilson took two bullets and a fourth place and sits top of the girl's RS:X. Maria Belen Bazo (PER) scored two seconds and a discarded tenth for second place followed by Israel's Katy Spychakov in third.

Another French team on top is Gwendal Nael and Lilian Mercier in the boy's 29er. The French pair started the day with a ninth but followed it up with a bullet and second to enable them to drop the earlier score. They sit just one point ahead of second placed John Cooley and Simon Hoffman (AUS).

The girl's 29er is led by Australia's Natasha Bryant and Annie Wilmot who scored a bullet and two thirds. They have a four point advantage over second placed Aleksandra Melzacka and Maja Micinska (POL) and a 14 point advantage over last year's champions Sirre Kronlof and Veera Hokka (FIN) who are in third.

Kathryn Hall and Ashton Borcherding (USA) lead a tight group of four teams at the top of the girl's 420 fleet despite a discarded 14th. They scored a second place in the last race of the day to hold a one point advantage over Isabel Davies and Gemma Keers (GBR). 2015 champions from Poland, Julia Szmit and Hanna Dzik are in third and Alexandra Stalder and Silvia Speri (ITA) are fourth.

There is a tie at the top of the boy's 420 with USA's Wiley Rogers and Jack Parkin and Italy's Edoardo Ferraro and Francesco Orlando both on six points.

Day three is scheduled to begin racing at 09:55 local time at the Torbay Sailing Club on Sunday 18 December.