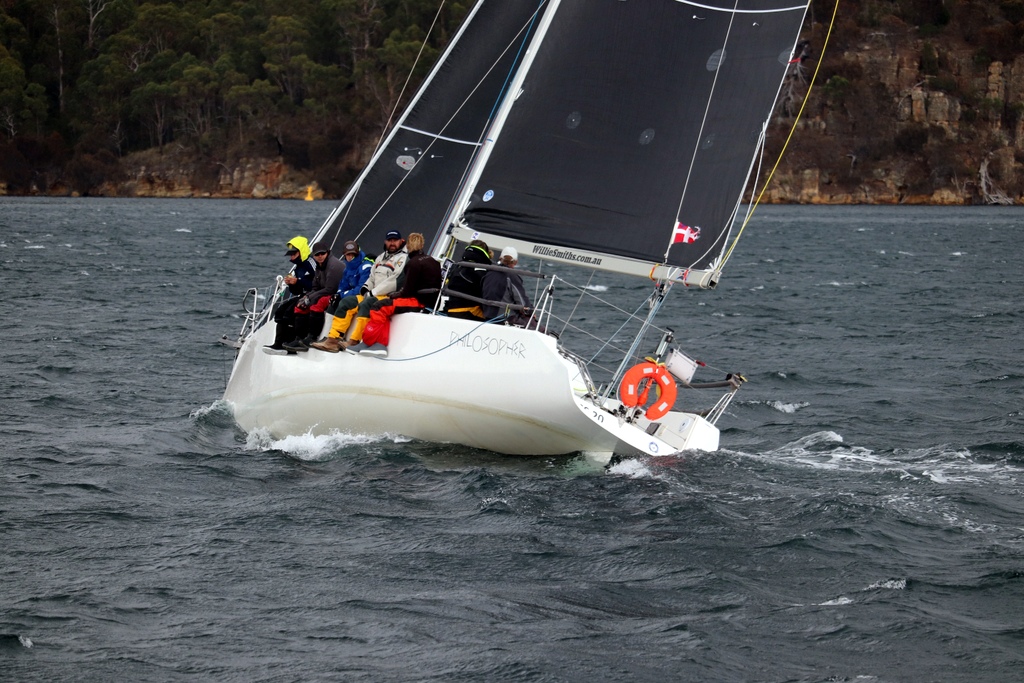 Tasmania’s (possibly Australia’s) oldest ocean yacht race, the Bruny Island Race, is never without its challenges and this weekend’s 93rd event run by the Royal Yacht Club of Tasmania proved no exception to the rule.

In the 93 races run by the Royal Yacht Club of Tasmania since 1898 there have been yachts dismasted and run ashore by the ‘Roaring Forties’, with line and handicap honours won by many famous yachts, including the 2018 Rolex Sydney Hobart Yacht Race winner, Alive.

In this weekend’s Bruny Island, the crew of the 19 boats (three retired) at various times on Saturday and overnight experienced windless, very windy, wet and quite chilly conditions.

“It was a ripper trip in a fresh SSW breeze – over 35 knots at times across the bottom,” is how Shaun Tiedemann, owner/skipper IRC and AMS winner Philosopher, described the 89 nautical mile race.

The Sydney 36cr clocked 17 knots on the spinnaker run past the rugged Tasman Sea side of Bruny Island, line honours winner Oskana consistently surfing up the coast at 15 knots and much more.

Philosopher’s double win (the yacht won IRC in the 2018 Bruny Race) climaxes an outstanding summer racing season for Tiedemann, his talented crew and their Sydney 36cr.

Since the end of December they have sailed Philosopher to IRC and/or AMS victories in the Maria Island Race, the Launceston to Hobart, the Australian Yachting IRC Championships on Port Philip, the Festival of Sails at Geelong and now, today, the Bruny Island Race.

The Royal Yacht Club of Tasmania today announced results for the 89 nautical mile Bruny Island Race which started on Saturday morning, the last boat finishing soon after 7.00am today.

“Bruny is where we introduce a couple of young sailors to ocean racing – this time Will Sargent (Lasers and match-racing) and Archer Ibbott (International Cadets).”

The oldest yacht race in Tasmania, and one of the oldest continuous (almost) long inshore/offshore events in Australia, first held in 1898, the Bruny Island Race circumnavigates the historic, elongated island south of Hobart.

At the start the RYCT signalled ‘leave Bruny Island to port’, which sent the fleet down the Derwent and through the winding reaches of the D’Entrecasteaux Channel, passing Cape Bruny and the Friars for a final sail in the Tasman Sea, Storm Bay and the Derwent to the finish off Castray Esplanade, Battery Point.

The race began off the Royal Hobart Regatta grounds, very much a start-and-stop spinnaker reach down the river. The then leading yachts, Crusader and The Fork in the Road, took 55 minutes to pass the John Garrow Light.

However, by the time the fleet had reached Cape Bruny they were battling a strong WSW breeze, gusting to 35 knots. After the long beat to windward down the Channel, crews eased sheets and hoisted Code 0’s or big spinnakers for an exhilarating ride back to Hobart.

Philosopher was fifth boat to finish just after 1:00am today and on corrected time won the IRC division from Oskana and Filepro (Tim Gadsby). Under AMS scoring, the Sydney 36cr comfortably beat The Fork in the Road (Gary Smith) and Whistler (David Aplin).

The Fork in the Road sailed an excellent race to finish just 10 minutes astern of Oskana and win the PHS category from Filepro and Philosopher. Third to finish was veteran ocean racing yacht Helsal 3, back sailing in Tasmanian waters after the 2018 Sydney Hobart.