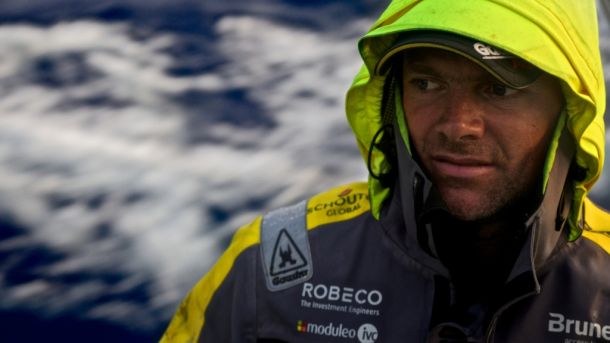 NEWPORT, Rhode Island, USA, May 13 – An arm infection has forced Team Brunel’s bowman, Gerd-Jan Poortman, out of Leg 7 of the Volvo Ocean Race from Newport to Lisbon starting on Sunday. The 39-year-old Poortman's (NED) place will be taken by the third-placed Dutch team’s first reserve, Timo Hagoort (NED). Rokas Milevicius (LTU) will assume the role of bowman for Leg 7.

“It all started a couple of days ago. I'm taking antibiotics now,” said Poortman. “According to the doctors, it's not certain that it will be cured within four days. And even if the infection is cured before the start of the next leg, I still can't use my arm on a professional sailing level. Because the next leg is very demanding from start to finish, I have decided, together with our physio (Mark Haak), and skipper Bouwe Bekking, not to participate in the this leg which will take us to Lisbon.“

The popular Dutchman is confident that his stand-in will ensure his absence is not badly missed by the in-form crew, which finished with a podium third-placed finish in the last leg to Newport, Rhode Island, from Itajaí, Brazil.

“Timo is a hard worker and a fine replacement,” said Poortman. “And Rokas has enough training to take on the role of first bowman.”

He continued: “I‘m happy that I was able to sail all stages, including rounding Cape Horn, so I've actually already been around the world. Of course I'm disappointed, but I find it especially hard to let the team down. In Lisbon, I will step back onboard.”

Meanwhile, skipper Bekking is happy that Hagoort has already gained a lot of experience with the Dutch team.

“I really wanted someone who had previously sailed on the boat,” he explained. “And during the preparation for the Volvo Ocean Race he sailed many miles with us, so that’s why the choice fell on him.”

For Hagoort, who has been patiently waiting for his chance ever since joining the crew, the call-up is a dream come true.

“I got a call this afternoon,” he said. “When he told me that I can sail to Lisbon onboard Team Brunel, I let out a little cry of joy and immediately afterwards I asked who had to be replaced. I know Gerd-Jan very well and I learned a lot from him. Since I became the first reserve, the team has grown a lot, so I don't know exactly which role I will get, but my strengths are that I can trim and work on the foredeck.”