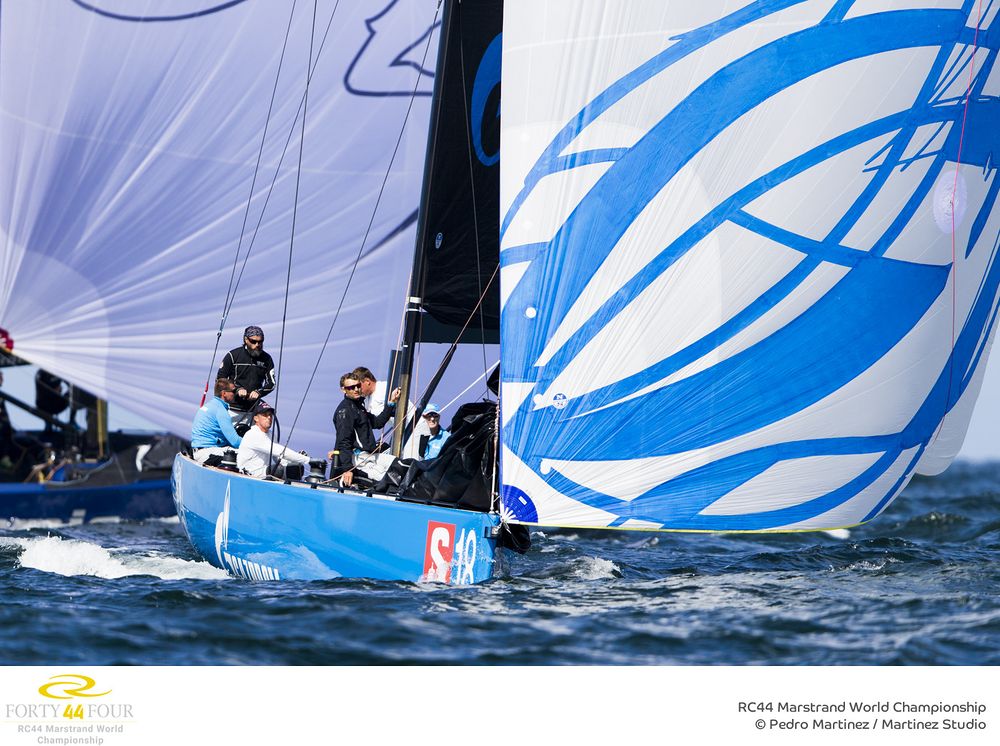 Day two of the RC44 Marstrand World Championship was far too fickle and tricky for any single team to dominate, but the best performers of the day were both Russian crews.

Bronenosec Sailing Team won the first heat of the afternoon after starting at the committee boat end of the line and gunning hard for the right-hand side of the windward leg in 8 to 10 knots of shifting breeze. Another Russian crew, Team Nika, won the next race and then Bronenosec seized the lead of the third race after a bold move out to the left of the final windward leg, although Artemis Racing came back strong on the final run to finish to take the final race win of the day.

Team Nika's scores of 4,1,5 have put Vladimir Prosikhin further ahead in the overall standings, now six points in front of the defending world champion, Igor Lah's Team Ceeref from Slovenia. Of the nine-boat fleet, three are Russian, and they now hold first, third and fourth on the leaderboard. Exactly one hundred years since the Russian Revolution of 1917, the Russians are coming on strong in Marstrand.

Bronenosec Sailing Team's scores of 1,6,3 make her the top performer of the day alongside Nika, a feat which made Liubomirov particularly proud. “I'm really happy with my team,” said the Bronenosec helmsman, also commodore of St Petersburg Yacht Club.

Now Liubomirov is looking to create his own revolution, to turn young Russians into world-class sailors. “My crew are young, doing a very good job and improving all the time. That was the goal all season, to build a good, young team of Russians.

“We have a very good teacher with our tactician Cameron [Dunn, from New Zealand]. He's been with us a long time, and sometimes he has to keep patience but in the end he does a good job and we're very happy with how things are going for us.”

On day one, Artemis Racing followed up a last place finish with victory in the next race, and today the Swedes did the exact same thing. Tactician Francesco Bruni commented: “It was a tough day but the good thing about the Artemis Racing team is we can go through the bad moments as a group without laying blame.

“Being over the line in race one was a mistake,” Bruni frowned. “But the whole fleet is pushing so it's hard to get it right.” With scores of 8,9,1 from the day, the Swedes now hold fifth place overall. Their team mates on Artemis Racing Youth had a good day with scores of 7,5,4, placing them just three points off fifth place, which tactician Freddy Lööf believes is a good target for this up and coming crew.

Vladimir Prosikhin has a six point lead but is taking nothing for granted. “It doesn't mean anything, it's too early for it to mean anything. You don't fight with your next competitors, you just focus race by race,” said Team Nika's helmsman who was relieved to have come through the day relatively unscathed.

“It was a tricky day, very light, some big, big holes, some waves – quite tiring for helmsmen, for trimmers, tricky for tacticians. To a great extent it was like a lottery when the wind comes in one side and disappeared on the other. We tried to stay consistent, with very good starts and we averaged well. It's a game of statistics.”

RC44 racing is a game that fascinates Prosikhin now as much as when he first sailed the boat. “It's my seventh year in the fleet. People are very loyal to the class because they really value the fun, the drinks and the atmosphere. Relations between owners are very good. Everyone is here for fair racing. No one cheats. I can't imagine anyone cheating in this class. All the owners are friends and we all enjoy a fair fight on the water.”
The warning signal for Race 7 is scheduled for 11.30am on Saturday, and the forecast points to more light winds, but from the south-west and with the possibility of rain. Follow the race coverage at www.rc44.com.