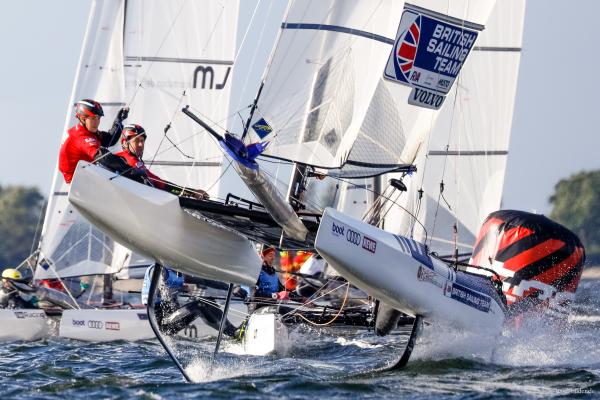 Strong winds and shifty conditions are making it very difficult to be consistent, yet some crews are firing in bullet after bullet, however in some of the Olympic classes the points at the top of the leaderboard remain extremely close. Just two days to the Medal Races and it’s all to play for.

Day 7 of Kieler Woche was another windy one with big shifts across the various race courses. Solid boat handling was one part of the equation but finding your way through the shifts and gusts was the other big challenge of the day.
Nacra 17

John Gimson and Anna Burnet sailed a stunning day in the Nacra 17, their scores of 1,3,2 moving the British crew to the top of the leaderboard ahead of previous leaders Jason Waterhouse and Lisa Darmanin. These two teams hold a bit of a gap on the rest of the fleet with Gemma Jones and Jason Saunders of New Zealand sitting in third overall.

Nathan and Haylee Outteridge continue to get to grips with the Nacra 17 after only a few days of sailing the foiling multihull. Today’s scores of 10,1,3 have lifted the Australian brother and sister combo to 11th overall. The Outteridges had to come from way back in the race that they won, managing to find some good wind shifts on the upwind legs to work their way past the opposition.

Finn
Previous leader in the Finns, Ed Wright of Great Britain, now finds himself in the middle of a Kiwi sandwich. Andrew Maloney moves to a 1 point lead while Wright sits on equal points with Josh Junior who moves to third overall. With a nine-point gap back to another Brit in fourth place, Ben Cornish, it’s looking like it will be a three-way fight for the Finn medals this Sunday.

470M
Luke Patience and Chris Grube won two races this afternoon, moving the British team to one point behind the new series leaders, the Swedish. Previous leaders Mat Belcher and Will Ryan have slipped to third overall although the Aussies are still only three points off the lead.

470W
Silvia Mas and Patricia Cantero won both of the last two races this afternoon which moves the Spanish to second overall and within striking distance of the German leaders, Nadine Bohm and Ann- Christin Goliad, whose advantage is now down to just two points. Maria Bozi and Rafailina Klonaridou of Greece sit in third place on equal points with the Spanish.

49er
The top four in the 49er Men all sit within a point of each other. A bullet in the last race of the afternoon lifts the Olympic Champion of 2008, Jonas Warrer crewed by Jakob Jensen, to first overall. However, breathing down the neck of the Danes are two Spanish crews – Diego Botin/ Iago Lopez and Federico/ Arturo Alonso – with Kiwis Josh Porebski and Trent Rippey in fourth overall. Fritiof Hedstrom and Otto Hamel enjoyed a stunning day in the strong breeze with scores of 4,1,2 which lifts the Swedes to 8th overall.

49erFX
As with the 49er Men, the points at the top of the 49erFX women’s skiff are incredibly close. Yesterday’s leaders from the Netherlands have dropped to fourth overall but it’s another Dutch crew that takes up the lead – Dewi Couvert and Jeske Kisters – although just one point in front of the Rio 2016 Olympic silver medallists Alex Maloney and Molly Meech from New Zealand. Just two points further back in third overall are Tina Lutz and Susann Beucke of Germany.

Laser Men
Elliot Hanson of Great Britain has been sailing incredibly consistently with scores of 5,1,1,2,2 to hold a four point lead in the Laser Men, ahead of local hero Philipp Buhl. Back in third place is Estonia’s Karl-Martin Rammo.

Laser Radial
Maxime Jonker of the Netherlands has won all five her races so far and holds a three point lead over Norway’s Line Flem Hoest, with Japan’s Manami Doi another two points back in third overall.

2.4mR
In the 2.4mR keelboat class, the reigning Paralympic Champion Damien Seguin has now won the last four races and has built up a 6 point buffer over Heiko Kroeger. Another German sailor, Lasse Kloetzing, sits some way off the top two in third oeverall.

Hansa 303
In the Hansa 303 fleet, Piotr Cichocki is building up an increasingly comfortable lead as the Polish world champions wins race after race. While the overall victory is starting look out of reach, Germany’s three-time Paralympic medallist Jens Kroker fought back with two 2nd places this afternoon, keeping him within striking distance of another Pole in second place, Waldemar Wozniak.