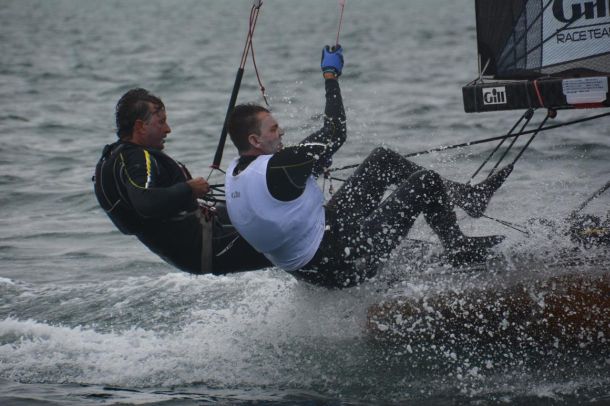 A smart recovery from a bad start and good tactics helped keep Britain’s Glen Truswell and Sam Pascoe in first place overall after the second race of the 2015 International 14 World Championships, being held at the Royal Geelong Yacht Club.

They had a battle on their hands, playing the shifty wind and constant pressure changes to finish today in second place behind fellow British team of Ben McGrane and James Hughes.

Truswell came off the start line in trouble, “We were on the starboard end of the line and holding a good position on the committee boat. A couple of Australian boats came in with great speed, straight over the top of us. It looked a bit marginal on the start, but it was clean and fine. They caught us napping a bit,” Truswell said.

“Halfway up the first beat we were probably right in the middle of the fleet. We counted ourselves jolly fortunate to get back up to second place,” he added.

Today’s race winners were pumped by their result, after struggling yesterday with speed issues due to jelly-fish, weed and a centreboard issue, which helped to push them out to third in the first race. The win in today’s second race of the series, has put them in a strong position on the leader board.

Although PRO, Ross Wilson, needed to juggle the tough decision on where to lay the course as the breeze oscillated, there was no delay to the start time, with a clean start from the fleet of 67 boats.

McGrane came off the line quickly, “We had a good start. It was pretty shifty and gusty out there. Even though we had more breeze than yesterday’s Race 1, there were still big holes.
“He (Truswell) was buried off the line and then hit hard left on the first beat, but then got back through,” McGrane said.

“Halfway up the beat we had a really good lead,” crew Hughes chirped in.

McGrane led at the first mark, but then dropped back to about fourth place. “We didn’t know why, but by the windward mark we were back in front. After that we just had to manage what was out there and try and keep ourselves in with the other boats,” he added.
Finding themselves at the wrong side of a few shifts then ensured Truswell closed the gap on his British compatriate.

“There were 30 degree shifts. Everyone was spotting them and working them. We managed to just about get the upper hand of most of them,” Truswell said. He finally caught up with McGrane by the second time around the top mark and then stayed with them until the finish.

“We came here knowing the British are sailing pretty fast. And the race officer did a fantastic job today,” McGrane said.

Australians Brad Devine and Ian Furlong did an exceptional job to finish in third place. At the first mark they were in about 13th place. Taking a leaf out of Truswell’s book, Devine picked his lanes on the first reach and continued to make the right call for the rest of the race. “We got through on the first reach. Held our own on the second. The second wind work we got a couple of good lanes up the middle and a couple of good shifts which slotted us into third place and we held it from there,” Devine said.

Defending world champion, British skipper Archie Massey and crew Harvey Hillary were very disappointed by their fifth place. They broke their jib sheet on the start line and then Hillary had to hold onto it right through the race.  “Today should have been an easy win for us if wasn’t for the damage. We had pace,” a frustrated Massey said. With a lay day tomorrow they will be working on their boat to ensure there are no further equipment problems.

On the overall pointscore Truswell/Pascoe (GBR) lead on three points. In second is McGrane/Hughes (GBR) on four points and in third is Massey/Hillary (GBR) on seven points.