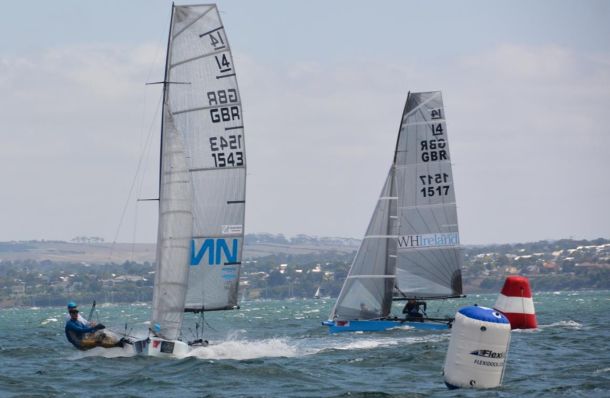 The British have given notice that they intend taking out the podium places at this year’s I14 World Championships after delivering another commanding performance on Geelong’s Corio Bay.

Britain’s Glen Truswell and Sam Pascoe took first place across the line. Ben McGrane and James Hughes were second and the heavier and strong-wind specialists Richard Bone and Chris Rodway were third. Continuing on their dominating form, Andy and Tom Partington were fourth and defending World Champion Archie Massey and crew Harvey Hillary were fifth.

There was some boat yard anxiety this morning as the clouds cleared and the wind built.  Massey found his post-Race 2 fix-it job on the jib sheet didn’t work and he had to scramble around for some quick drying glue. Truswell was seen doing a last minute number on his sheets, making sure all were solid for a heavy race. Other teams were going similar checks in anticipation of a tough day ahead.

Heading out to the course the capsizes started, and it wasn’t long before some teams turned tail and headed home. For those who made it to the start line they enjoyed a clean start.  On the committee boat end Truswell, McGrane and Massey were together.

“Archie was beneath us and Ben above us. We all got lifted up slightly. Ben came out best from that start. After the first tack we got lifted inside of Ben and just cleared him at the windward mark. Once we found the reach mark, we were first to hoist.  We got a little away there and then down the second reach we got a huge gust and had to drop the kite. There was a big shift on that second reach of about 30 degrees with about five more knots of breeze.

“On the next beat Ben gained quite a lot by going hard right so we had to work quite hard down the next run to get away from them,” Pascoe said.  Even with gusts of over 20 knots Pascoe said they weren’t fazed.

“Ben had some trouble with his jib on the last run which finally gave us some breathing space,” Pascoe added.

Tom Partington talked after the race about survival conditions today. “We got a knot in our kite at one stage. Then when we got down towards the leeward mark the waves were really lumpy. It was quite tricky conditions.  We are normally faster in those conditions, but we have new sails and we haven’t quite found the right tuning for that sort of breeze,” Partington said.

Massey had another disappointing day today, finishing in fifth across the line. “We spent all day chasing our set-up.  We just struggled all day long. We were better yesterday when we had to hold the jib sheet,” his crew Hillary quipped.

“The gap is getting bigger to the guys in front“, a down-beat Massey added.

Even with two firsts and a second in his results, Truswell is realistic about how he will approach the final four races. “There is a hell of a long way to go. We just keep treating every race as a new one knowing at the end, that to win the world title we are going to need really tidy scores. The fat lady is a long way away as yet so we will keep our heads down and keep working towards nailing ones, two, threes,” Truswell said.

In the overall results, Truswell/Pascoe are in first on four points, McGrane/Hughes in second on six, Massey/Hillary in third on 12 points and Andy and Tom Partington in fourth on 14 points after three races and no drops.

In fifth place overall and leading the Australian Championship point score are Brad Devine and Ian Furlong.  Devine went into today’s race with a strong expectation that he would struggle against the British teams.

“This is like club racing for them. The big bonus for the Brits is that they sail with the top sailors every weekend, whereas our top sailors only get together once a year, sail for seven races and then not see each other for 12 months. Their racing in that really, close, fast, environment all the time. The Australian guys tend not to do that because we are so isolated. Where their fleet is spread out over several yacht clubs, ours is spread out all over the country. So they have great club racing every weekend with the top sailors,” Devine said.

In second on the Australian Championship point score is the over-50s team of Lindsay Irwin and Andrew Perry. They had a great, but tiring day, finishing in sixth place, ahead of Devine. “We got a bit tired and a bit brain dead near the end, missing the lay-line. Other than that we got around and kept it upright.

It’s always good to be ahead of Brad,” a smiling Irwin said.

Racing continues tomorrow with Race 4 of the series scheduled to start at 2pm.