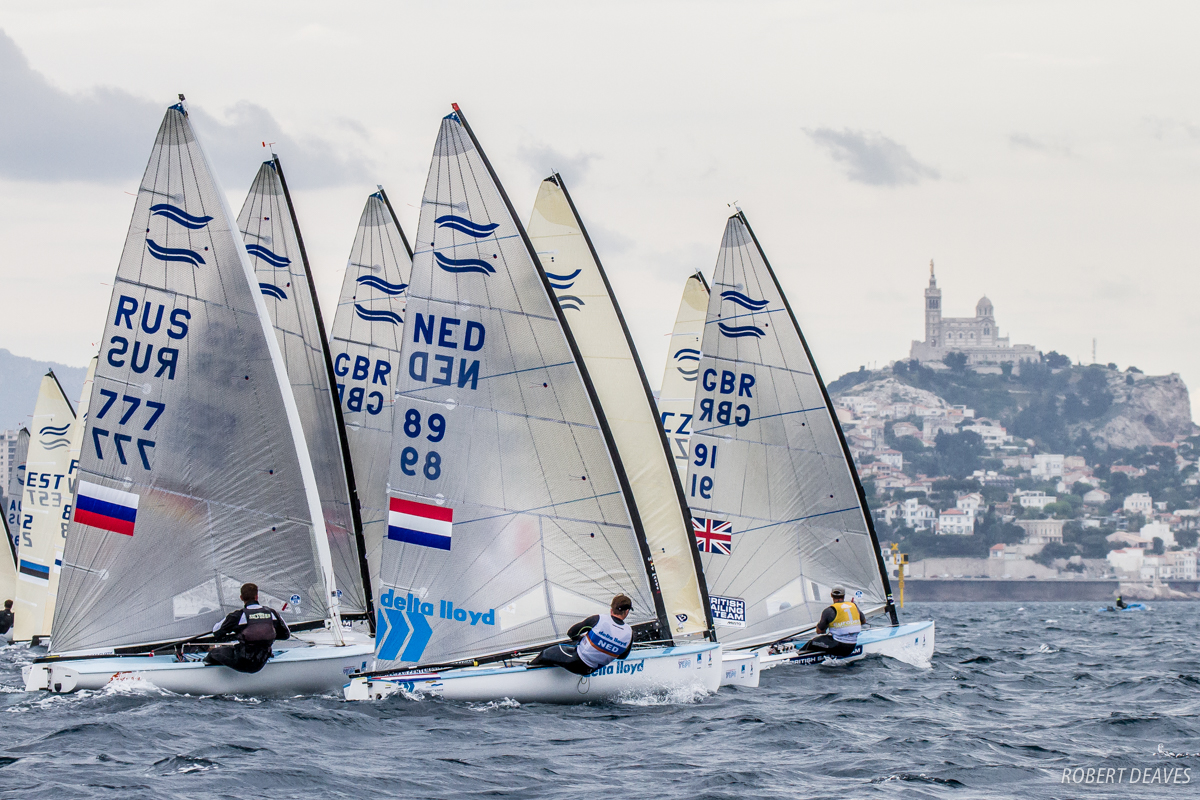 Ed Wright, from Great Britain, has retaken the lead at the Finn European Championships in Marseille following another long day on the water after almost four full races were sailed. The ever consistent Norwegian, Anders Pedersen, is up to second while Jonathan Lobert, of France, is up to third.

The Bay of Marseille has been a bay of contrasts so far this week with yet another set of new conditions thrown at the competitors on the third day. The sailors are finding the bay both challenging and at times perplexing. Looking forward to a day of moderate to strong winds, the first two races were sailed in a building south-easterly wind with occasional rain, but the third race was abandoned as the wind died completely. The re-sail was eventually sailed in a light and patchy breeze after the Race Committee moved position.

Race 4 was a re-sail of the race abandoned on Tuesday with the lead changing at every mark. Tom Ramshaw, from Canada, led at the top after a shifty beat under the Point Rouge headland. Lobert had taken the lead by the gate but then Josip Olujic, of Croatia, found a shift on the left to pass everyone on the second beat. However the winner was Wright, who flew downwind to take the win from Lobert and Olujic.

In the increasing wind, Race 5 was a triangle course in slightly more wind with the rain easing as the fleet approached the top mark. Mikolaj Lahn, from Poland, led at the top and down the run, but it was Henry Wetherell, from Great Britain, leading round the next top mark and round the reaches to the finish from Lahn and regatta leader, Ben Cornish, from Great Britain.

Race 6 was where it started going wrong. With Oscar up at the start and a solid 15-18 knots everyone was set for another great race and for once an early finish. However it wasn't to be with the wind already dropping out at the top mark and R flag up to restrict free pumping. The wind dropped to around 6 knots on the run and there were huge place changes downwind. Wetherall had led at the top and extended round the gate from Milan Vujasinovic, from Croatia and Cornish. Wetherell managed to extend his lead on the next beat as the wind dropped completely for those behind and though he had wind all the way, the race was abandoned when he was 200 metres from the finish line. Most of the fleet was stranded near the windward mark.

After a short wait, the Race Committee moved position and set up a short windward-leeward course further away from the hills to windward. Former European Champion, Ioannis Mitakis of Greece, led round the top mark from the Croatians Vujasinovic and Olujic. It was a short race and Mitakis led through the gate, but Vujasinovic was in the lead at the top and extended downwind for the win, from Olujic, while Wright came through after another blistering downwind for third.

The day was won on the water by Pedersen who is piecing together an impressively consistent series with all top eight results.

“It’s been a good week being consistent in all my races. Unfortunately with the new format, if I can keep this up it doesn’t pay off that much. But I am happy with my sailing. I have been improving a lot especially downwind.

“It was shifty, and up and down so hard to get the right puffs. A frustrating day.”

Nicholas Heiner, from the Netherlands had a better day after a tough start to his first Finn major championship.

“I think today was another really tricky day. The race committee put us back underneath the mountain again so every time at the top mark it got really shifty and we had one race where there was no breeze at the top. So basically we sailed four races today, in some really challenging conditions from zero to 20 knots.”

“For myself I just needed to step it up a little bit. Keep my eyes out of the boat and set myself some priorities for today and I think in the end four top ten results, including one abandoned race, so pretty happy with the day.”

Wetherell is now the clear leader in the U23 European Championship after one of the best days on the water. He sits in eighth place overall, 40 points and nine places above Oskari Muhonen, from Finland. Evgenii Deiev, from Russia is in third place overall.

Wetherell commented, “The first two races went quite well with a seventh and a one, and the abandoned race I was winning that as well, but it got abandoned just before the finish, so would have been a great day, but in the fourth race I was in the mid-20s, so it was a good day but it could have been a lot better.”

“In the first two races the wind was quite a steadyish wind given that it was coming off the cliffs, but then gradually through the day the gust to lull got quite a bit bigger and got worse all day, so it was quite tricky.”

It was another long day on the water, but at least the championship is now back on schedule. Super strong winds have been forecast for Thursday, with the first warning signal delayed until 12.00 in the hope that the worst will have passed.

The key for the leading sailors now is to stay in the top 10 so they make the winner takes all finals on Saturday afternoon. A simplified format is being tested here of what was first tried in Palma. The top three boats in the opening series go straight to the five boat Final, while the next seven sail the Semi-Final, with the first two across the line advancing to the Final. It is intended to broadcast both the Semi-Final and Final through Facebook Live.

There are now just four Opening Series races left before the cut is made, with the last race scheduled for Saturday morning, before the Semi-Final and Final on Saturday afternoon.