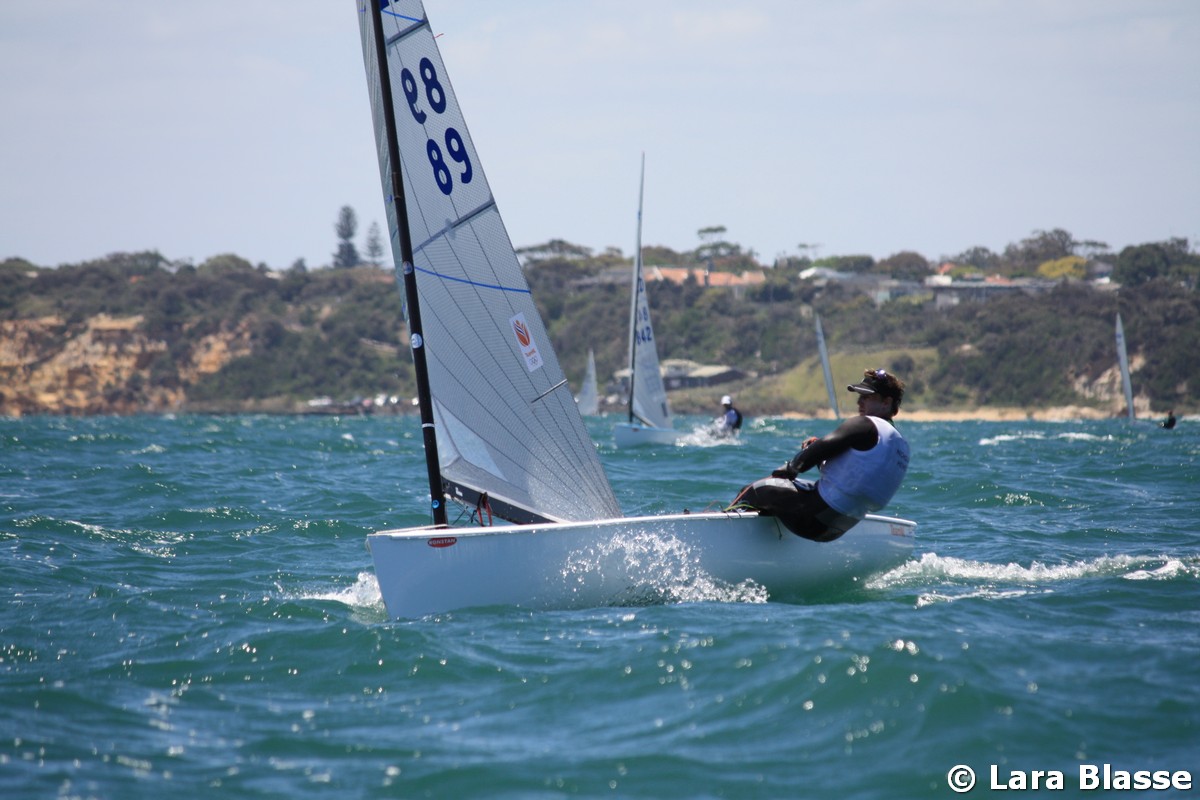 Current European champion, Ed Wright (GBR), moved into a podium position on the penultimate day of the Ronstan Australian Finn Championship at Black Rock Yacht Club in Melbourne after another tough sea breeze day, though the 40-strong fleet had to wait for it to become established.

British Olympic champion, Giles Scott, won the first race of the day to sit seven points ahead of second overall Nicholas Heiner, from The Netherlands on a picture-perfect day at Black Rock.

Mark Jackson reported, “The first thing I noticed was there was no car parking left and the beach at Half Moon Bay was already full of umbrellas at 10am – it was going to be a great day at the beach. Even the jet skis had arrived early. Unfortunately for sailors though, no wind.”

There was breeze, but only a patchy 4 to 5 knots. The Race Committee headed out at 13.00 looking for wind, and by 13.30, the AP over one was replaced with the AP and racing looked possible. At 14.00 the sailors were summoned as there was 6 to 8 knots on the race course and the AP was lowered.

Once everyone was ready, the sequence for Race 7 was started in 8 to 10 knots with the windward leg at 175. The fleet started to bunch at the pin end as the breeze moved left 10 degrees, but the fleet still got away clean under ‘U’ flag.

Heiner was over at the pin and was hiding a number of other recalcitrants. Most boats tacked as soon as possible onto port to take advantage of the left breeze and it was Scott, Pieter-Jan-Potsma, Heiner and Jake Lilley around in the first four.

The breeze gradually increased, and Oscar was flying by the second downwind, so it turned into another pump-off for the top boats. Scott took the win from Lilley, while Postma took third after Heiner scored UFD.

The sequence for Race 8 began almost immediately, with many changing sails as the breeze had increased to 12 to 14 knots. With Oscar flying, and the boat end favoured, Wright judged it well and led round the top mark. The two Australians battling for the national title, Lilley and Oliver Tweddell, were fighting to get back from an unfavoured left side of the course.

By now the breeze had settled in at 15 to 16 knots, a perfect Black Rock sea breeze. Wright maintained a comfortable lead to take the race win from Postma and Heiner.

Wright said, “It was a bit lighter today. I went back at the start in the first one, which put me back, but I recovered ok. The second one I had a little battle with PJ but managed to lock into some nice shifts on the second upwind and pulled ahead and won, which was great.

“We have had good conditions and race management so far. It’s the last day tomorrow, and it looks windy, so I can’t wait.”

Last year’s U23 champion, but now too old, Lewis Brake has had a steady week and is enjoying the international competition on home waters: “The racing is quite good having so many good guys. It’s quite easy racing though, I just follow Giles and up at the top mark I'm in good shape, which makes life comfortable.”

“Lachy Gilham was looking pretty tired today and Henry Wetherell was complaining about his legs cramping as well. I guess it’s been a long championship so far, in the Melbourne heat, and daily sea breezes with 1 hour 10 minute race tracks.

Overall the racing has been a lot of fun. We don’t normally get this depth of racing in Australia, which has been amazing for everyone here to participate in and be on the same line as Olympians, World and European champions, America’s Cup sailors and the like,” Brake said.

Looking ahead to the Finn Gold Cup at the Royal Brighton YC in December, “The Gold Cup will be really special. I feel like December in Melbourne can be pretty ugly, but January is always turning it on for great conditions and racing.

“As long as we can get all the bad weather out of the way during Sail Melbourne, the Gold Cup will be awesome. Big waves, hopefully big breezes and Australian summer; not much else needed really. I’d hate for anyone to miss this Worlds, because it will really be a great event.”

With two races left to sail, Heiner is realistically the only one capable of toppling Scott, especially with the Kiwi team leaving early due to prior commitments, opening up the top 10.

Wright is 22 points off the lead in third, but on equal points with Lilley. However, Lilley is likely to be more concerned with staying ahead of Tweddell, just six points behind, as the race for the National title goes right down to the wire.

Event documents and other information: www.bryc.com.au/news/11046/