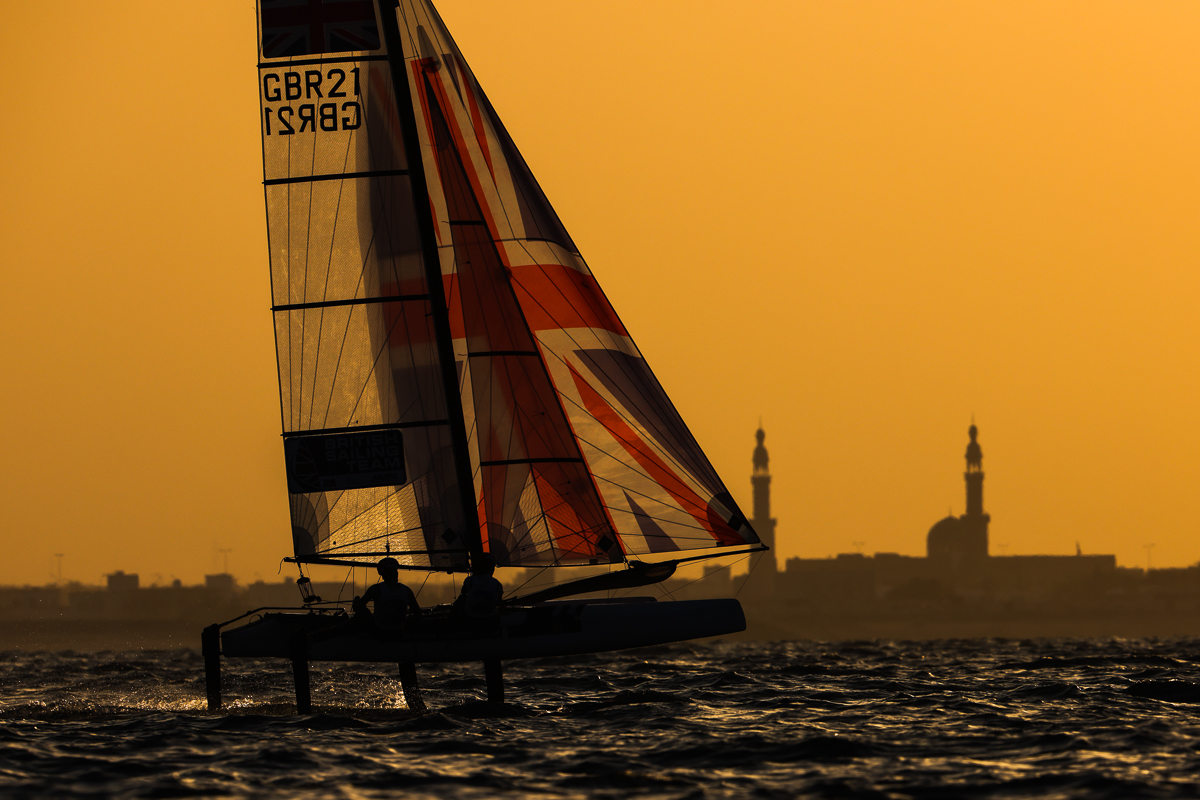 Mussana, Oman – John Gimson and Anna Burnet foiled into the lead of the Nacra 17 World Championship with an impressively composed display of high-speed tactics and strategy at the Nacra Worlds today.

Scores of 5,1,2 could so easily have been a string of bullets, but the British results were still the best of the fleet in light to medium, ever-shifting conditions.

The Olympic silver medallists and 2021 European champions are now in pole position to defend their 2020 world title, having moved six points ahead of the previous championship leaders from Italy.

“That wasn’t easy,” said a still-wet Gimson, shaking his head as dark covered Mussana Beach. “It’s a chip-away regatta,” he added alluding to the multiple losses and gains he and Burnett had to manage.

Chip away is what the top sailors in all the fleets had to do in a breeze that barely settled in at eight to 10 knots and refused to settle down with subtle shifts all day.

Gianluigi Ugolini and Maria Giubilei have clearly benefited from being the tune-up boat to the reigning Italian gold medallists, Ruggero Tita and Caterina Banti. However, the fast-improving Italians couldn’t match British consistency and sailed to respectable but unremarkable scores of 7,4,6 to lie two places back in second.

Following the Germans’ photo-finish victory over the British in the final race of the afternoon, Paul Kohlhoff and Alica Stuhlemmer have moved to just three points behind the Italians.

France’s Tim Mourniac and Lou Berthomeu also staked their intentions for a podium spot at tomorrow’s prizegiving ceremony. The French finished 2,5,5 to put themselves just four points behind the Olympic bronze medallists from Germany.

The 2019 World Champions Vittorio Bissaro and Maelle Frascari worked their way through to the front of race one for a win. It was a great comeback after a torrid previous day on the water. Leading the final race, the Italians let Germany and Great Britain make their move to the right-hand side of the final run and dropped to third at the finish, an opportunity missed for the ambitious Italians.

With just one fleet race in the morning before the 10-boat Medal Race, time is running out for the chasing pack to make up lost ground. At the end of the penultimate day, it’s the same three nations who won Olympic medals at Tokyo 2020 in podium position in Oman – Great Britain, Italy and Germany.

Dutch dodge disaster to dominate
Lambriex and van der Werken (NED) bounced back from a dismal 20th in race 13 to finish the day with a 2, 1 and keep control of the 2021 49er World Championship.

With aggressive tactics early in races, the Dutch had no trouble keeping their advantage. Sailing with confidence and committing early to their plans they go into the final day to lead by seven points.

The Dutch didn’t seem to feel any extra pressure after their poor opening race. “We didn’t change our approach to the next race at all,” Lambriex said. “We knew what we wanted to do all day, and the last race didn’t change anything.”

Barrows and Henken (USA) remain in the hunt for a medal with a 4, 10, 13 on the day. They are dropping a 13th, which shows incredible consistency over a fifteen-race series so far.

Only 19 points separate Robert Dickson and Sean Waddilove (IRL) in fifth and 13th overall, leaving plenty of teams aiming at a good final fleet race tomorrow to capture a ticket to the medal race.

Van Aanholt and De Ruyter unflappable in World’s quest
In a day described as ‘random’ by most of the fleet, van Aanholt and de Ruyter (NED) continually moved up through the fleet to take a stranglehold on the lead at the World Championship.

Light winds and a delayed start meant only two races were held, and in each race, the Dutch made mammoth downwind comebacks to beat out their rivals and score low points on the day.

Right at the start of race 13, the Dutch were flagged for pumping their mainsail outside of the rules and had to start the race with an exonerating penalty turn. They managed to keep the damage within reason and rounded the top mark in mid fleet.

Grael and Kunze (BRA) had a better windward leg. They used a masterful “high mode” to convert a super tight lane on the beat to pass a half-dozen teams and slide around the top mark in first.

The Dutch pair spotted pressure on the right side of the run and gybed. Gaining more than 200 meters, Van Aanholt and de Ruyter went from circling at the start to the lead in a single lap, and held on for the win.

Race 14 saw the Dutch hold their nerve to comfortably nab a sixth while the Brazilians sailed their drop race with an 18th.

“We thought there was good wind there and wanted to separate from the group in light wind,” said de Ruyter. Van Aanholt added, “We were sure, but not totally sure, but then we saw it play out how we imagined.”

As it stands heading into the final day, the Dutch now sit 17 points ahead of their rivals.

Naess and Ronningen (NOR) climbed through the fleet to third in the final race to reclaim second place overall. Brazil sailed their drop race, and both remain well placed for medals, and within reach of the gold.