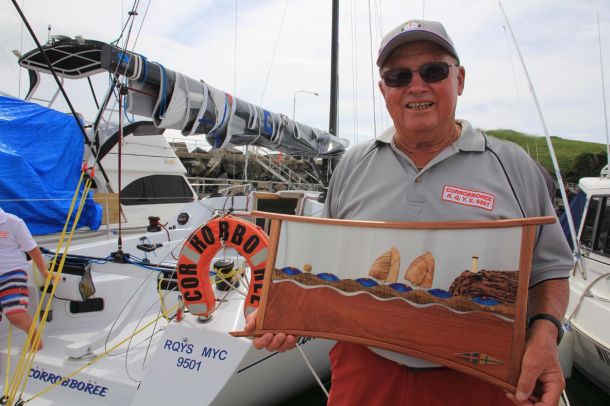 Hoping for fresh conditions and vying for yet another bluewater handicap win is Sunshine Coast based seafarer Robbo Robertson, who has shockingly suggested this could be his swansong ocean race. “I’m feeling that way inclined. I’m getting a bit past it all and there are other things I could amuse myself with. I’m heading to Brisbane to get the boat ready and pull it out of the water. I sand my own racing boats so I’ll be underneath with cold water dripping on me for the next two days.

“It’s a big investment over 40 years; I reckon I’ve taken close to 2,000 people sailing with me. The best thing about the sport is the comradeship,” he adds.

There’s no red flag linked to his health Robertson dryly assures: “There’s nothing’s wrong with me, other than you look at the birth certificate and it’s getting a bit yellow.”

The self-proclaimed ‘Sir Robbo of Queensland’, or the shortened ‘Sir Robbo’, is hoping the fleet for this weekend’s annual Sydney Gold Coast race will “get the light stuff and we’ll get some decent breeze for the race to Keppel, for a change.  I’ve done this race two or three times taking different boats. It’s a good event, especially if you are contemplating going further north for cruising or the various race weeks.”

A week is a long time out to predict weather and based on typical patterns in southern Queensland at this time of year it would be a daft move to gamble one’s youngest child on the heavier breeze eventuating. Still, a decent trade wind from behind for the coastal sprint to Keppel Bay and on to the various Whitsunday race weeks is good for pre-race bar chatter.

With knowledge gained from the Brisbane to Gladstone race back in April, Peter Harburg’s 70-foot Black Jack has been strengthened for running conditions. The long range forecast of good breeze from a SE-E direction is promising news for the Queensland team, both for line honours and a sniff at the four year old race record of 24 hours 22 minutes 20 seconds set by Bob Oatley’s Wild Oats XI in 2011.

“We have stepped in the direction of being stronger with a spinnaker on,” said skipper and longtime helmsman Mark Bradford.  “That’s all the modifying we’ve done since the Hobart race and we get to try the boat out this weekend in the Gold Coast race and next week in the Keppel race. Then again, there’s no such thing as a free lunch; if you give up reaching performance to gain on running, you’ve still had to give something away.”

Rejoining her Black Jack teammates after a long stint away completing the Volvo Ocean Race with the all-female Team SCA is Sunshine Coast sailor Stacey Jackson. “Stacey will do a bit of everything; she’ll start in a trimming position and put out a few fires no doubt. Hopefully she’ll tell a few stories and bring across the technical know-how she’s gained having just spent nine intense months sailing around the world,” Bradford added.

Etchells sailor Matt Chew is part of the driving team on the former Volvo 70 design, along with Vaughan Prentice and Brian Hillier.  Black Jack is the largest yacht in the Brisbane to Keppel fleet and needs to average 14 and a bit knots over the 348 nautical miles to reset the clock and whiteout the dominant supermaxi Wild Oats XI’s name from the record book.

Keppel Bay Marina is putting the finishing touches on their Finish Line Festival plans and the team look forward to welcoming in the strong fleet with a traditional Capricorn Coast pineapple and XXXX case of beer.

Competitors will meet at RQYS on Wednesday July 29 at 1830hrs for the mandatory race briefing.

The fleet can be tracked via Yellowbrick here following the 1100hrs start on Thursday 30 July to the east of Green Island, Moreton Bay.