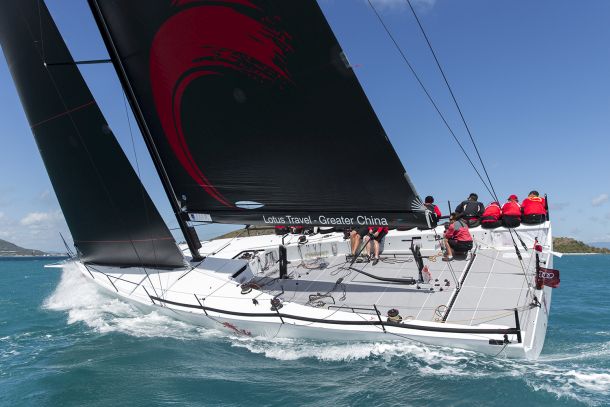 Brilliant sailing conditions on day one of the IRC Australian Championship inflated adrenaline levels and threw the less practiced straight into the deep end at the 32nd Hamilton Island Race Week in the Whitsundays.

Cool 20 knot SSE tradewinds and breeze against tide for the Dent Passage spinnaker start of IRC divisions on Sunday August 16, 2015 put the sail trimmers on high alert and the photographers in a clicking fury.

There was some panicked yelling when drivers lost control of the helm and boats tipped over precariously, including among the IRC fleet. Conditions required ‘all hands on deck’, and last night’s lavish opening cocktail party for owners and fireworks at Hamilton Island Yacht Club was a hazy memory.

The IRC divisions started first and the biggest were ashore by lunchtime, giving Bob Oatley’s line honours winner Wild Oats X an average speed of 11 knots over the 23 nautical mile Molle Islands race. The 66-footer’s top speed was 23 knots. “You don’t get many races where you are lit up the whole way,” commented Oats’ crewman Chris Links.

Division A winner of today’s race around Daydream and the Molle islands was Karl Kwok’s new Botin designed TP52, Team Beau Geste, making its debut at Race Week. Built low profile and minus a coach-house meant that each time the bow was buried, water poured back into the cockpit. “It was very wet; we enjoyed it very much,” Kwok said grinning.

He’s already marked Matt Allen’s Ichi Ban, second today on handicap, and Secret Men’s Business, third today and his former boat, as the boats his New Zealand team need to shake off to defend their IRC Australian Championship Class A title. “All the TP52s here have been turbo’d for racing under IRC. It’s a strong fleet and it’s going to be close racing,” predicts Beau Geste’s helm Gavin Brady.

Kwok’s put in a huge bid for another title – bringing tactician Steve Hayles out from the UK, where he is navigator on board the TP52 Ran in the Super Series in Europe, and adding Francesco Mongelli as navigator and Rob Salthouse to his weaponry.

Bob Steel’s new Mat 1180, the only one of its kind in the country and the perfect wide-beamed hull for fast planing rides, did a number on the IRC division B fleet, beating Walter Lewin’s Farr 400 Vento.

David Currie’s IRC Division B entry, Ponyo, retired minutes after their start off Hamilton Island with a crew injury, a nasty rope burn to the hand for Matthew Theauw after the crewman grabbed a free-flowing spinnaker halyard on the modified Farr 40.

There wasn’t time for cocktails on division C entry Gauntlet, Craig Ellis’ Sydney 36 from Brisbane, but if the breeze drops later in the week there’s a new drink on the menu. During the recent slow Club Marine Brisbane to Keppel yacht race the ‘Keppel Bay sunset’ cocktail was born, a combination of rum and powered orange juice, the mixer you have when there’s no Coke left.

Four divisions make up the IRC Australian Championship hosted by Hamilton Island and running alongside Audi Race Week, the 10th anniversary of Audi’s partnership with the world-class regatta and lifestyle event.

Tomorrow’s forecast is for SE winds 16-18kts and Tuesday August 18, for the Club Marine long race, is 14-16kts SSE. The IRC fleet switch to windward/leewards tomorrow on the eastern course area and the nine remaining divisions will contest another round-the-islands race.