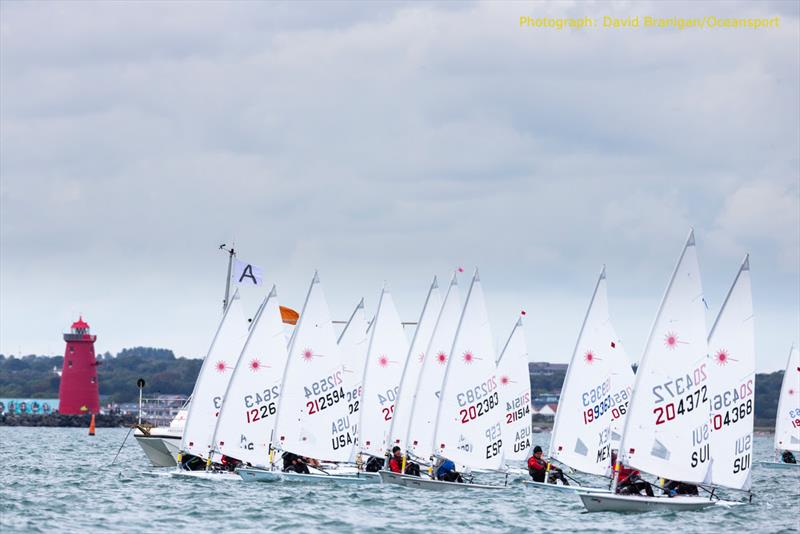 Dublin, Ireland: After a touch and go battle with light winds on Dublin Bay, both course areas delivered a final race to round off the Laser Masters World Championships sponsored by DLR on Saturday afternoon local time.

The 11th race did little to alter the leaderboards, with emphatic class wins in all but two fleets.

Sweden's Tomas Nordqvist had been challenging for the top spot but had a 14th place that dropped him to fifth overall leaving the way clear for race winner Carlos Martinez of Spain to take second place, just two points shy of Lyttle in first.

There was a similar battle for the overall win in the Standard Apprentice class that ended the week long match-race between Spain's Leandro Rosado and Canada's Gord Welsh with the Iberian sailor edging ahead by two points.

A race win for Roger O'Gorman sealed third place in that 14-strong class and settled the four-way battle between leading Irish boats after previous overnight leader David Quinn had a discarded ninth for the day.

In the Women’s competition, the biggest grouping was in the Radial Grand Master class where Lyndall Patterson emerged best of the seven sailors, beating fellow Australian, Camilla Graves, into second overall. Patterson finished 20th overall in the open fleet, with Graves 24th.

Of the five women racing in the Radial Master class, Canada's Caroline Muselet was best in addition to placing eighth in the main class.

Amongst the 'slam-dunk' classes where there was impressive consistency all week, there were few surprises despite the light winds offering to shake-up the standings.

With the pressure off, Australia's Brett Beyer scored a 10th in the Masters final to outstandingly win. He discarded this result after winning eight of the 11 races, with a second and third in the other two.

In the Radial Grand Master class, the other big fleet of the event, Stephen Cockerill (GBR) had a second place and secured the title with over 20 points to spare.

In the 37-strong Radial Grand Master class, there was no doubting Cockerill’s grip on the fleet from Bill Symes (USA) after seven race wins. Ireland's Christopher Boyd won the final race to secure third behind Sweden's Lasse Wastesson.

New Zealander Scott Leith won his eleventh world title after easing into second place thus ending a series of all top three results for the week. And with only one race in prospect as the time-limit for the day ran down, Germany's Wolfgang Gerz sailed ashore and still won the Standard Great Grand Master class.

Amongst the Radial Apprentices, Ben Elvin from the Britain also dropped the final race after a brace of race wins leaving Dubliner Andrew Byrne to take the race win and third overall behind Optimist coach Thomas Chaix from France racing under his adoptive Irish colours.