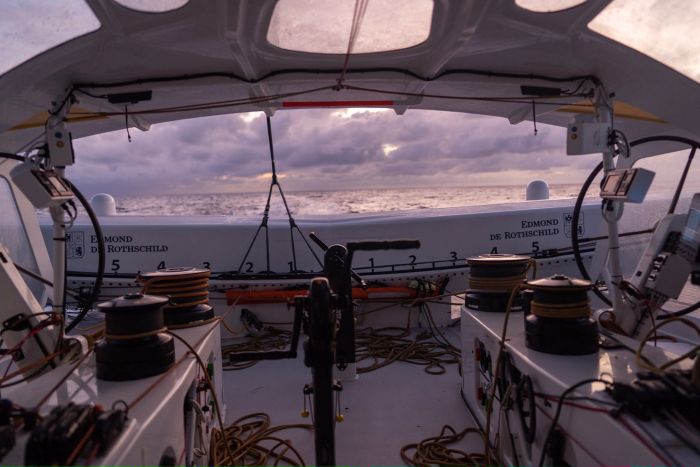 All three trimarans racing on the Brest Atlantiques are continuing today to head towards the west, with Maxi Edmond de Rothschild, in first position, expected very soon to cross the equator and arrive in the Northern Hemisphere.

Even though Brest is the final destination, the boats are in fact heading towards Brazil, a good 90 degrees from the most direct route to Brittany! This afternoon, Maxi Edmond de Rothschild was 3200 miles away from the finish. Franck Cammas and Charles Caudrelier will need to position themselves as well as they can in order to cross the Doldrums, staying well placed in between MACIF, located 850 miles to their south, and Brest.

As planned, MACIF passed through a front last night, as Gwénolé Gahinet explained today: “The night was difficult for us passing through the front, dealing with difficult weather conditions and having to change our sail. We approached the front with a north/north-westerly wind of 22-23 knots, which enabled us to keep our mainsail pretty high. As we crossed, we rotated 140° in 20 minutes, but fortunately in quite light winds, which settled fairly quickly to the south. This allowed us to pick up the pace as we finally get closer to Brest!”

It shouldn’t take MACIF too long to gybe as they head towards the equator. “The objective now is to shift to the west and gybe this afternoon to avoid light winds at the edge of the front,” Gwénolé Gahinet continued.

Actual Leader, meanwhile, which is now roughly equidistant from Africa and South America, is continuing to sail north-west at speeds of more than 20 knots, following two days at a slower pace. Even though the gap between Actual Leader and Maxi Edmond de Rothschild has narrowed during the day (322 miles at 3pm), Maxi Edmond de Rothschild should be able to gain more ground after making a gybe and accelerating northwards.

Yves Le Blévec and Alex Pella will have to finish their ascent up the South Atlantic gradually, as the angle of the wind will slow them down. It remains to be seen whether Actual Leader will be able to remain in second place with MACIF picking up more and more speed.

Let’s see what tomorrow has in store…