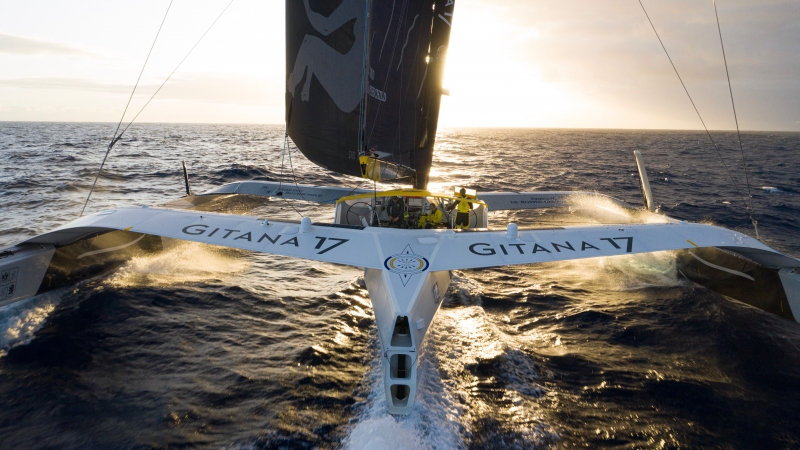 After more than two days at sea, the four trimarans racing in the Brest Atlantiques are sailing almost at the latitude of the Canary Islands, heading south in average trade winds and a calming sea. And while the erratic nature of the trade winds is forcing the sailors to stay on guard, the living conditions on board are much more pleasant.

Following a bumpy start sailing across the Bay of Biscay and rounding the Azores High, the main topic of the day for the four trimarans has been when to make the gybe, the first one of the race, in order to make the most direct course south towards the equator and Brazil.

An essential but energy-intensive manoeuvre, as Jean-Luc Nélias (Sodebo Ultim 3) explained in a video sent by the onboard media man Martin Keruzoré: “A gybe takes about half an hour, what with raising one foil, and lowering the other, doing the manoeuvre, turning the gennaker, and changing all the settings.”

Maxi Edmond de Rothschild, positioned furthest east after passing inside of the DST at Cape Finisterre, lost the most ground in the early hours of this morning, with Franck Cammas and Charles Caudrelier having to make two further gybes in the morning because they got caught up in a squall. “The first gybe went well, we had a great start to the race, and the second one started well but then we got caught up in a squall”, comments Charles Caudrelier, with Franck Cammas adding: “We struggled all night, going round in circles.”

As for the other boats, the Trimaran Macif (François Gabart/Gwénolé Gahinet), positioned furthest west in the fleet, gybed once, as did Sodebo Ultim 3 (Thomas Coville/Jean-Luc Nélias), while Actual Leader (Yves Le Blevec/Alex Pella) made the manoeuvre twice. Jean-Luc Nélias summarises well the strategic battle at stake: “We had to try and find the best possible moment taking into account the strength and direction of the wind. It was important to plan the gybe well, because it should be the last before the Doldrums which is in two days time.”

Until then, the eight sailors will continue on a fast descent, with shifty trade winds of around fifteen knots and on a much calmer sea. The strength and direction of the trade winds will require the teams to make a number of adjustments to their route. The state of the sea will also give the sailors a chance to recharge their batteries after a physically demanding start. In today's 4pm ranking, Maxi Edmond de Rothschild is still in the lead, 25 miles ahead of the Trimaran Macif, 132 ahead of Sodebo Ultim 3 and 248 ahead of Actual Leader.

We hear from the Race Director Jacques Caraës: “It was a busy morning for the four trimarans, with the Maxi Edmond de Rothschild being the first to gybe, no doubt wanting to make some headway south, to later realign with Trimaran Macif, which you can see by the 200 mile lateral distance this morning decreasing to 160 this afternoon. The leading two have built their distance over Sodebo Ultim 3 throughout the day, which could be due to the erratic trade winds. Sodebo Ultim 3 has no doubt found it tough in the weaking wind of 15 knots to keep up with the Maxi Edmond de Rothschild and the Trimaran Macif are foiling. They all continue to head south. We see that a zone of high is likely to cause some trouble for those further out west. Trimaran Macif is likely going to slow down as it tries to realign, this is one of the challenges for the end of today. What's next? How best to approach the Doldrums is no doubt at the top of the routers' minds.”