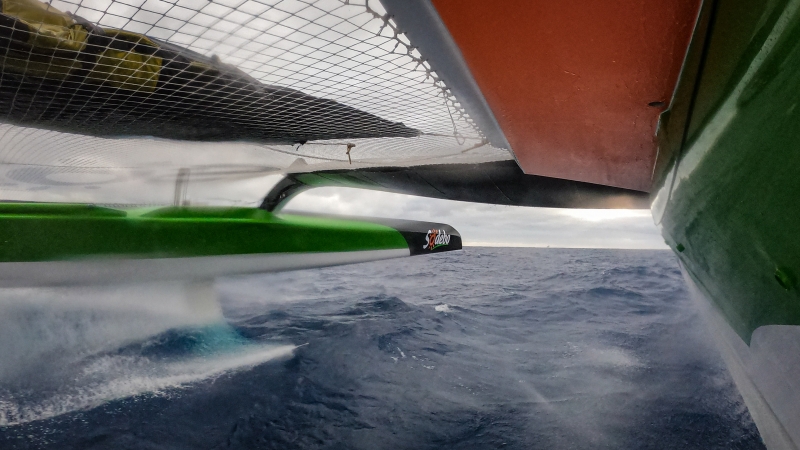 The ’Brest Atlantiques’ race is in full swing this Friday with the boats, currently led by Maxi Edmond de Rothschild, speeding towards the equator – and Friday evening's challenge is managing the wind off the Cape Verde Islands before the fleet faces the big question of the week: where is best to cross the Doldrums?

The four pairs of skippers, all in good spirits, joined the Friday ‘Brest Atlantiques’ call at the weekly gathering held in Paris. They were delighted to be able to enjoy summer-like conditions after the tough start in the Bay of Biscay.

“I thought there was no such thing as sunshine and blue skies, so yes, yes, I can reassure you, there are parts of the world where the weather is incredibly beautiful,” Thomas Coville said from third place aboard Sodebo Ultim 3, at 4pm.

“On the other hand, from time to time, there have been big squalls that sometimes ‘eat up’ the wind, which is not very good for our speed and has bothered us a lot all night and for the past 24 hours.”

Sodebo Ultim 3 is chasing the leading duo on Maxi Edmond de Rothschild and Trimaran MACIF. They are in a favourable position this Friday as they took advantage of a shift to the east to descend faster than their rivals.

However, Franck Cammas could not be happier about teaming up with Charles Caudrelier: “We know that Macif is going fast all the time, they know the boat very well; they master this kind of offshore sailing, we are very happy to be racing with them, so much the better that we are in front. But it’s only the beginning of the race. It's a beautiful chess game in the Atlantic,” Coville admitted.

On the Trimaran Macif, second in the 4pm position report, 65 miles behind the leader, François Gabart shows good sportsmanship: “Maxi Edmond de Rothschild was very far to the east, they managed to win in the west quite easily, because the wind was stronger in the east last night compared to the forecasts, they took full advantage of it.”

The winner of the 2012 Vendée Globe, like all his competitors, now has his mind focused on Cape Verdes, and how they are going to manage the wind. They will then go onto the Doldrums which, according to Franck Cammas, could benefit those who arrive first:

“I am under the impression that the conditions look good for entry to the Doldrums, but they could change quickly. There is a very small chance that whoever enters first will do better than those following,” Cammas said.

Yves Le Blevec and Alex Pella (Actual Leader), racing along at over 30 knots on Friday morning, continue to chase: “Sometimes, the conditions allow the boats in front to go quite fast, at other times, like this morning, we were able to catch up a little.

“In any case, we're not giving up, the pace is very good aboard Actual Leader and we're delighted to be where we are with a boat exactly in the same condition as at the start. This race is wonderful; we will make sure that the story continues in this way.”