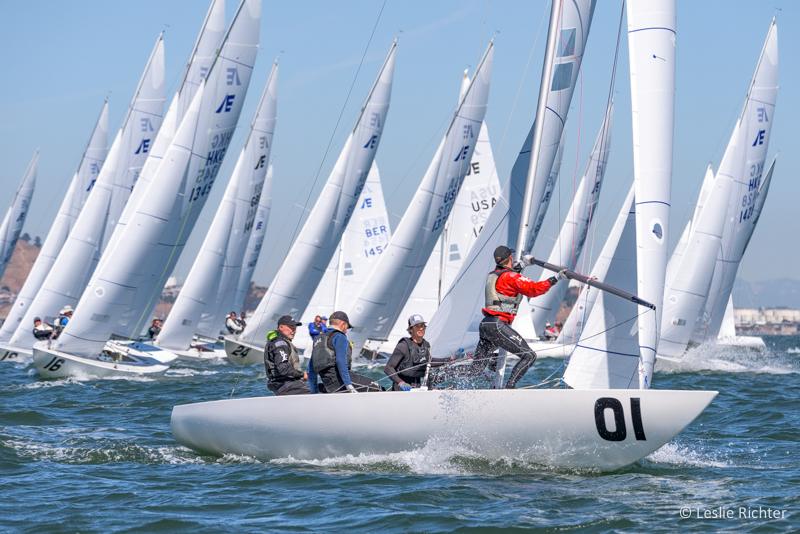 Belvedere, CA, September 26, 2017 – Racers were overly eager as racing kicked off on the third day of racing in the 2017 Etchells World Championship. Unlike the previous two days, a consistent 8 – 10 kt westerly had filled in by noon and racing started on schedule – except for a general recall in race five, the first of the regatta. Racers were still pushing hard at the restart, with ten boats hailed OCS, and only seven returning to restart.

Scott Kaufman and his team of Austen Anderson, Jesse Kirkland, and Lucas Calabrase were first to the windward mark and held on to win race five. “This regatta is far more competitive than the 2016 event in England,” said Kaufman, the 2017 North American Etchells Champion. “The top 30 teams are incredibly close. You can’t make any mistakes. We hope we can keep it together for the next two days and finish in the top 10.”

The consistency story of this regatta is the performance of the top Corinthian team, Senet Bischoff (USA), Ben Kinney, and Clay Bischoff. With a third in the first race and a bullet in the second, their lead on the competition has widened. Prior to the start of the regatta, Dave Ullman opined “Any team than has a top ten finish in every race will win the regatta.” At this point, no one has achieved that goal, but Bischoff and his team have come closest. “Bischoff’s team is sailing really well, and they haven’t needed to discard any of their scores so far,” said Dave today. “It’s a powerful weapon to have a throw out to use later in the regatta.”

Racing continues tomorrow through Saturday with two races on Friday and one on Saturday.