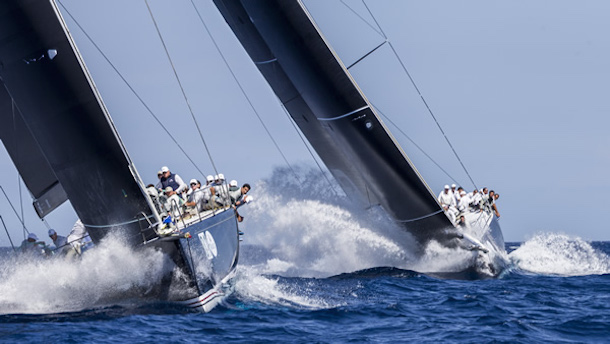 Porto Cervo laid on ‘best day of the year’ conditions for the finale of the Maxi Yacht Rolex Cup and the Rolex Maxi 72 World Championship organised by the Yacht Club Costa Smeralda and the International Maxi Association. After Friday’s postponed layday, the 39 competing Maxis today enjoyed winds that peaked at 24 knots and a growing sea state off Porto Cervo.

As Andrew McIrvine, Secretary General of the International Maxi Association, described it: “We have ended the week with the best weather, champagne sailing, 20 knots, hardly a cloud in the sky and a nice course. I think everyone has been happy with the week.”

While all the other classes sailed a coastal course, the Maxi 72s completed the final two windward-leeward races of their World Championship in winds of 17-22 knots.

American Hap Fauth’s Bella Mente started the day leading from Roberto Tomasini Grinover’s Robertissima III and Dieter Schön’s MOMO, with just two points separating these three. Sadly MOMO’s chances faded after she was called OCS in the first race, allowing Bella Mente to forge her way through to take the first win of the day.

“We had a very good start and just legged out,” explained Fauth. “We have a good high mode. We tacked, cleared everyone and were gone.”

In the second race, Sir Peter Ogden’s Jethou won the pin and did well out on the left, but she and George Sakellaris’ Proteus encountered traffic as they approached the top mark on port, causing MOMO to take the lead. In second, Belle Mente nosed in front on the run, but coming into the leeward gate, trawled her A4 kite, getting it caught around the bow and the crew eventually jettisoned the wayward sail. By this time they were last. However, Fauth observed: “We just sucked it in and put our nose to it.” Bella Mente recovered to third, enough to win the first Rolex Maxi 72 World Championship, one point ahead of Robertissima III.

“It is nice to prevail, it is terribly gratifying. This has been our objective for the entire season,” said Fauth, winning his second World Championship title. “Patience and persistency – it took a lot of both! We were very consistent all week. The idea was to be in the game today – and we were.”

Fauth paid tribute to his crew, which includes the likes of Terry Hutchinson, Adrian Stead and Mike Sanderson. Hutchinson observed: “I think when we woke up this morning and saw the forecast we breathed a little sigh of relief. You’d rather race against Robertissima in 17 knots than 7.”

Sailing their new boat (ex-Rán 5), the Proteus team had a better day. “It is great racing with these competitors – it's very close and the boats are very good. We are new on this particular boat, so we are learning,” said owner George Sakellaris.

Proteus was hampered by being forced to sail day one with the bottom third of her rudder blade missing after it broke in training. Fortunately, indicative of the sportsmanship in the Maxi 72 class, they were lent a spare by MOMO.

After being thrown in the water by his crew, Supernikka owner Roberto Lacorte said: “It is a good feeling – the best feeling that is possible after this week. We ended with a good race and demonstrated that we are still fast in strong winds. I’m very happy – this win comes from a fantastic group.”

The two tightest races in the Maxi Yacht Rolex Cup were in the Maxis and the combined Mini Maxi Racer-Cruiser and Spirit of Tradition classes. In the latter racing started today with a tie between the Vallicelli 80 H2O and the Swan 65 Shirlaf, winner of the International Maxi Association’s Volcano Race this year.

In the event, H20 prevailed, both boats once again finishing on equal points (thanks to a discard) but Riccardo de Michele’s team coming out on top after winning today.

This is the first occasion H20 has won in Porto Cervo, despite competing here for the last nine years. “H20 is a cruising boat: It took a long time, but finally we managed to win!” declared de Michele. “The race today was fine – our boat is very competitive in 15+ knots. Finally today both boat and crew could show their best and we managed to stay in front of Shirlaf, our direct rival.”

In the Maxis, the competition was equally close with Windfall and Grande Orazio Pioneer Investments, a Southern Wind 94 and 82 respectively, tied on points at the start today. Ultimately Windfall came out on top. For Irish owner Michael Cotter, this was his third Maxi Yacht Rolex Cup victory: “We didn’t have a lot of competition, but we had a lot of competition from Grand Orazio – we won three and they won two. It was good fun. But it is always fun when you win.”

The Supermaxi class included the most awe-inspiring craft with Jim Clark and Kristy Hinze Clark’s 30.5m Comanche eating up the miles all week, but the world’s fastest offshore monohull was roundly dwarfed by the 66.7m long ketch Hetairos. However on handicap it was Marco Vogele’s 33m Briand design Inoui which came out on top.

“It was good, sailing in much stronger winds and it was a fun course,” said Vogele of today’s race. “It’s been great racing this week. We’ve enjoyed it a lot. We’ll be back.”

In fact Inoui lost today’s race to the Maxi Dolphin 118, Viriella, whose owner, Vittorio Moretti, this evening at the prizegiving in the Yacht Club Costa Smeralda’s piazza, received the Gianfranco Alberini Challenge Trophy for the crew showing the best sportsmanship during the event.

In the 13-strong Wally class, the larger boats tore around the course today with Sir Lindsay Owen Jones’ Wally Cento Magic Carpet Cubed winning. However a second place for the longer Open Season was enough to hand the overall win to Thomas Bscher’s yacht.

“It was perfect,” said Bscher of the conditions today which saw his giant Wally hitting 20 knots. “We lost the start against Magic Carpet Cubed and we were always there, but we didn’t have any proper opportunity to pass them. But that wasn’t necessary and we didn’t take any big risks to do that.”

As to the future for the maxis, Bscher, yesterday appointed the International Maxi Association’s new President, said: “We are on the right track – the big task will be to get the big boats back. I’m sure we’ll find a solution.”