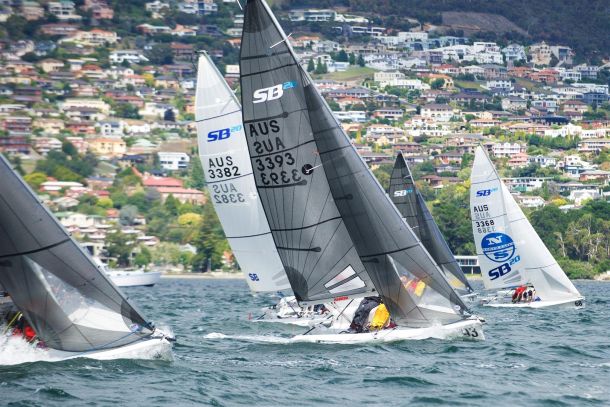 World champion and former Olympic sailor Glenn Bourke (Red) and his crew of Rob Jeffreys and Jake Lilley have carried their 2015 Tasmanian State Title form into the first day of sailing in the 2015 SB20 Australian Championships, blitzing the rest of the fleet with incredible racing on the River Derwent.

But local sailor and Bourke’s former International Laser Class training partner Michael Cooper (Export Roo), with Matthew Johnston and David Chapman, is hot on his heels. “Today was our 10th sail – we worked hard on our trim – the key was keeping the boat flat so we could sail high,” said Cooper.

Bourke dominated Race One with an elapsed time of 39:29 minutes, almost a minute ahead of Tasmanian SB20 Class President Scott Brain (Ronald Young Builders) 40:28, with Michael Cooper (Export Roo) in third 40:36. Sailed in north westerlies of 18 – 25 knots, Andrew Blakney (Wicked) retired for the day with pole damage and Matt Pilkington (Balios) missed the first race with a broken rudder.

Cooper predicts much closer racing on Day Two of the three day regatta. “Tomorrow will be softer, lighter wind from the same direction and when it gets lighter the fleet condenses, so tomorrow it will be all about a clear air start, a good first beat and a good first run,” said Cooper.

Hosted by the Derwent Sailing Squadron, the Australian Championship boasts a fleet of 25. The series standing heading in to Day Two has Bourke on 7 points, Michael Cooper on 8 points, and Brett Cooper (Cunic Homes) on 20 points. For updates and results follow: www.dssinc.org.au