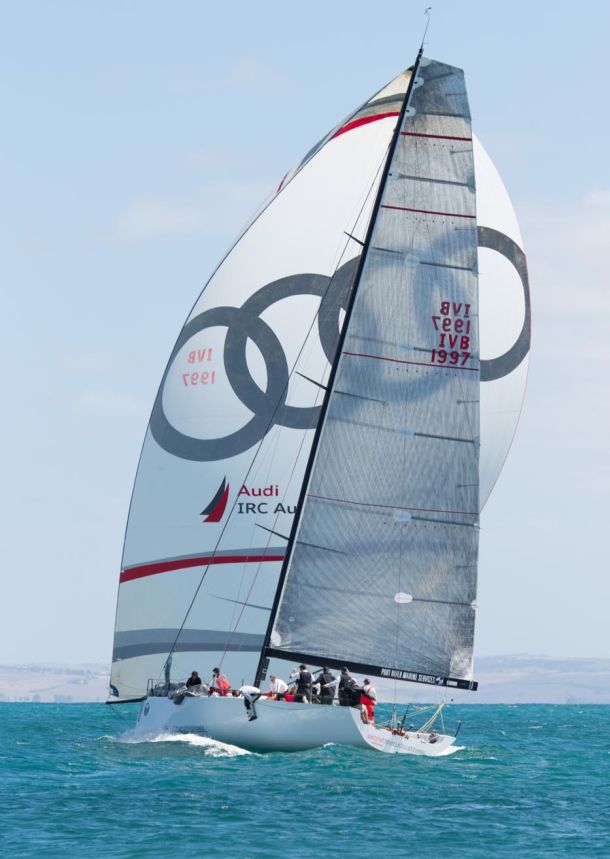 Most owners left last year’s Audi Hamilton Island Race Week tired, tanned and happy after a week of winter Whitsunday racing, appreciating their boats would be safely delivered or trucked home. Most owners aren’t South Australian yachtsman Geoff Boettcher and his mixed fortunes when it comes to yachting, particularly at the established Whitsunday series.

Boettcher’s not even one-year-old modified Farr 400 called Secret Men’s Business 4.5 was involved in a nasty truck accident on the way home from the island in August and declared an insurance write-off. Back in 2007, a former SMB was holed from both sides in a start collision that ended his Race Week campaign before the first start gun had fired.

Undeterred, the veteran and overall winner of the 2010 Rolex Sydney Hobart yacht race with Secret Mens Business 3.5, an RP51, has started a new chapter in the sport. This time with a TP52 and he’s coming to contest class A of the Hamilton Island IRC Australian Championship with the reigning national titleholder.

“The truck and boat on a trailer ended up in the scrub on the way home and both were destroyed. It was such a shame as the Farr 400 only came out at Christmas and we’d made so many improvements,” Boettcher recalled. “On the bright side it did give me a chance to get back into where I like my sailing; in the 50-52 foot range.

“When we were at Hamilton Island last August I was thinking about a 52. Though I heard Beau Geste might be coming up for sale, I didn’t even look at it… you don’t own two boats. After the accident I approached Gavin Brady and Karl Kwok and arranged for the TP to be shipped from Asia just after Christmas, in time for the Adelaide to Port Lincoln race. We had a very successful Port Lincoln Regatta, but know we need to improve our skills.

“The latest Secret Mens Business is a fast boat, and tricky. The tiller steerage is very light compared to the old boat. It’s very rewarding if you get it right,” Boettcher added.

It’s currently on the hardstand for modifications to modernise and build on the sparse internal fit out, mainly adding some creature comforts for offshore passages without affecting performance in the upcoming Southport race then the all-important IRC series.

If all goes to schedule and Matt Allen’s latest Ichi Ban, Rob Hanna’s former TP52 called Shogun from Geelong, is ready in time for Race Week then the South Australians will be stacking up against a reputable class A target. “Matt’s also doing modifications, including a new rig. We are really looking forward to what will probably end up a close match up, with potentially a couple of other TP52s in the mix,” Boettcher hopes.

As the current commodore of the Cruising Yacht Club of South Australia, Boettcher’s aiming to uphold the boat’s IRC Australian Championship title, earned last year when Karl Kwok’s then Beau Geste cleaned up the big boat division of the Audi IRC series out of Newcastle Cruising Yacht Club, and return with the trophy to his club.

To improve his chances Boettcher is putting together a seasoned team of 14, a mixture of his successful 2010 Hobart crew plus a couple of the ex-Beau Geste lads and four America’s Cup sailors from Australia’s unsuccessful Cup defence in Perth back in 1987. SMB’s navigator Steve Kemp is joining up with Robbie Deussen, Andy Dyer and Julian Freeman. “We’ve all sailed together before. To have four of the old America’s Cup boys on board for the championship will be fantastic!” the skipper added.

It’s likely the final IRC line up will be split into classes A, B and C based on size and IRC rating. Already twenty two yachts have been nominated for the Hamilton Island Yacht Club hosted championship, representing New South Wales, Queensland, Tasmania, Victoria and South Australia.

The IRC fleet will contest a mixture of windward/leeward and passage racing over six days, August 16 to 18 then a layday before the second half, August 20-22.