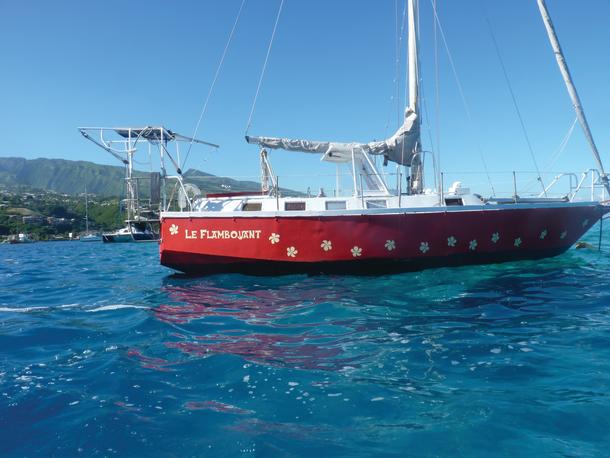 “It is better to travel in hope than to arrive” is the often quoted mantra of the philosophical nomad who wishes to distinguish himself from the tourist or business traveller. However, the person who wrote this has clearly never been in a howling gale on a boat he did not trust. In this case, arrival is very much the preferred state of being.

Bad conditions at sea are always challenging, but can be made almost unbearable if you have less than 100 per cent confidence in your boat and spend every mile worrying about your chainplates or listening to your bulkheads creaking, wondering if they are up to the job. How you feel about the ability of your boat to survive unpleasant conditions will define not just your relationship to your boat, but your whole attitude to both travelling and arriving.

Our first boat was a 34 foot steel Van de Stadt. Every time the weather piped up, I would feel supremely confident that, whatever else happened, Jasna and I would be OK. No worries, bring it on.

I have not been able to replicate that feeling in subsequent fibreglass boats, even our heavily laid up Hans Christian 36. Even if this was the only advantage to metal boats, it would still be enough to make them worthy of serious consideration. After all, what price is peace of mind?

Steel boats however, have much going for them than just security.

The majority of boats you will see for sale are made from fibreglass, ‘frozen snot’ as legendary designer Francis Herreschoff rather dismissively referred to it. Despite Mr Herreschoff`s reservations, fibreglass has proved to be a very good, low maintenance boat building material when used correctly.

Fibreglass is fairly strong, does not suffer from corrosion and can be moulded into some beautiful shapes. It can be ignored with fewer repercussions than other materials. There are certainly more fibreglass boats on the market than boats of any other material, making it the number one choice for most sailors.

Steel boats, by contrast do not share the same low maintenance reputation and the internet is full of warnings about corrosion and pictures of badly made steel boats that look like the portable toilets at a grunge festival. However, much has changed recently in the world of steel and it might be worth a look with a more modern eye before writing it off completely.

Steel boats have always had their admirers and I include myself amongst them. They are strong and ductile, ie. they will deform on impact without breaking. They are stiff and can absorb loads from rigging and waves crashing on the deck, they are fairly easy to repair in a developing country and you can run aground in them with less repercussions.

Yet many people are wary of steel boats because, as anyone who has owned a car will know, steel can rust quickly in water and very quickly in a mixture of salt and water.

Two things have conspired in recent years though, to make steel a very viable option for the modern cruiser: coatings and design.

Today’s modern two-part epoxy coatings have changed the way we see steel forever. Far more effective than any of the previous coatings, epoxy is easy to apply and virtually indestructible; providing a strong, waterproof barrier to the sea and therefore, corrosion. With the addition a few coats of high-build primer, the steel boat is almost drifting into the arena of a composite.

Steel hulls can be as fair as any other material.

When steel was first used in cruising yacht design, the designs leaned heavily on the practices of traditional wooden boat builders. Many still do.

The ribs would be lofted and the steel plates welded on the sides. This lead to some very ugly boats indeed. Some were ‘boxy’ to say the least and others looked like half starved horses where the plates deformed between the ribs due to bad welding practices.

Furthermore, it is well known that steel boats tend to rust from the inside out because little pockets of water get trapped where you can not see them. often where the ribs join the plates.

Some bad steel designs have left many sailors with a negative view of all steel boats and this can work to the advantage of the wily sailor with shallow pockets and big dreams, because less demand means lower prices.

Fortunately there are steel boat designers like EG Van de Stadt and Brent Swain who use frame-less designs for their steel boats, all but eliminating many of the traditional design problems and making some attractive boats into the bargain.

Our steel Van de Stadt 34 was nice looking, as strong as an ox in shin pads and we were very pleased with her. She was practically new, but we bought her for the price of the engine, mast and sails. If she had been made from fibreglass, we could never have afforded her.

Whenever you see a comparison between steel and fibreglass in the yachting press or in forums, they invariably come down on the side of fibreglass. These comparisons are inaccurate because they tend to compare, say, a new fibreglass hull with a new steel hull or a five year old fibreglass hull with a five year old steel hull under the misguided idea that this gives a fair comparison. These studies are made with the underlying assumption that money does not matter. Yet, for most cruisers, money or rather value for money, is a reality we cannot ignore.

Confused? OK for a really fair comparison between steel and fibreglass boats, you need to talk about cost, not age. For example we bought a practically new 34 foot steel boat for $50,000. Sails, electronics, engine, transmission, rigging, in fact everything from stem to stern, was as new. With a quick visit to the boatyard we were off sailing for four years with little maintenance.

Now compare this with a fibreglass boat that cost the same. There is no comparison. The same boat in fibreglass would be at least 20 years old, with a 20 year old diesel and other equipment. It is much more likely to have been in a collision than a practically new boat or repaired badly in some areas.

Steering gear, wiring, plumbing, electronics, anchors, chains, dinghies, outboards, winches, sails etc., are probably also 20 years old and there may be some osmosis or waterlogging of the decks. Just about every system on the boat, from cutless bearing to anchor windlass, is a possible source of problems.

I spend at least five times more on the maintenance of my old fibreglass boat than I did on my nearly new steel boat although both cost the same. Many frameless steel boat owners report similar findings. A comparison based on cost for the right steel boat would nearly always come down in favour of steel, except in Northern Europe, where steel boats fetch higher prices than elsewhere.

While we are on the subject (soapbox) here are some more advantages of the newer steel boat.

Steel boats do not suffer from this, older fibreglass boats often do and can cost tens of thousands to put right. Our steel boat did need a bottom job when we bought her, due to a stray electrical current that was easily detected and remedied, but the whole sand-blasting and application of epoxy resin cost $2000. Seven years later she is still sailing on the same bottom.

The problems with joining rigging to fibreglass, wood or ferro-cement, is solved by using large steel plates known as chainplates to spread the load. This requires drilling through the hull material.

These chainplates invariably take on some saltwater through the bolt holes, or where they exit the deck and begin to corrode. At the very least they are a constant source of concern because they are often buried deep in the fibreglass and not easy to inspect. You do not have this problem with steel as it is strong enough to weld an eye directly onto the deck or hull sides where they are strong and, more importantly, inspectable.

Most fibreglass boats have cored decks. This is where the decks are made like a sandwich: fibreglass as the bread with plywood or balsa as the filling.

On older boats these are often waterlogged as they have absorbed sea and rainwater over the years through gaps in the deck fittings. Not a problem for steel decks.

Often a constant litany of leaks particularly, but not exclusively, in lightly-built boats. In a steel boat, the process of welding usually results in a watertight deck to hull joint.

Many fibreglass boats show signs of ‘crazing’ particularly on the decks. Steel is unaffected by ultra-violet.

A Bermudan rig has only one advantage over other types of rig and that is its ability to go to windward. To make the most of this, a bar-tight forestay is required. I would not feel comfortable applying such a constant high load to most fibreglass boats used for cruising and therefore much of the advantage of the Bermudan rig is lost on many fibreglass boats.

A steel boat absorbs these loads without complaint.

Another reason I like steel boats is that they speak to you. If there is anything that needs your attention your boat will produce a little brown weep of rust to show you where it is.

It may seem counter-intuitive, but steel boats are safer in thunderstorms by acting like a giant Faraday Cage (google it) which protects not only the people on board, but can help limit damage to your electrical goodies too.

Not an insignificant point. You are going to feel like the biggest smarty-pants in the world when you return to port safely with a boat that looks like a banana. The type of impact that would cause a steel boat to deform in this way would sink a boat of any other material.

Because the price differential means that everything else on the newer steel boat will be that much less used, just about anything you can think of, from rudder bearings to toilet seals, from rigging screws to radios, from diesel engines to sewage tanks is going to give you far less trouble than the older fibreglass boat approaching a refit. This was certainly the case for us.

The newer steel boat of frameless design is starting to look like a better idea even if you do have to keep an eye on the rust. There is a caveat though: employ a surveyor who is accustomed to looking at steel boats. He will probably have an audio gauge a device that uses sound to measure the thickness of the steel and another device for measuring stray current, a big enemy for all boats, but particularly steel.

Avoid all boats that have wood laid over the steel and do not shoot yourself in the foot by seeing this as an opportunity to get a bigger boat for the money instead of a better quality one for the same price.

Also, you may want to learn to weld. ≈